What if you could earn rewards for charging your gadgets via your own ‘green’ energy source instead via mains electricity? A new online marketplace from Changers allows you to do just that.

We first covered Berlin’s Changers when it launched its USB-equipped solar panel last year, allowing owners to store up energy to charge smartphones and other gadgets. That was only half of the startup’s vision though. As an extra nudge towards doing the right thing and using renewable energy, the Changers Marketplace has opened today. 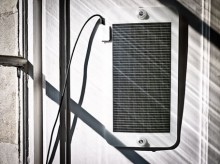 As you store up energy in your Changers solar panel, you earn credits for each gram of saved CO2, which you can then redeem against a diverse range of products and services, including babysitting, car hire and clothing.

Although it’s a worldwide launch, most of the offers available right now are focused on European markets. Still, it’s an innovative idea, rounding out a product that has had its fair share of challenges since it first emerged at the end of 2011. Changers had to declare insolvency only few weeks after launch due to an investor getting into financial troubles. In March 2012, the founders bought back the company assets and got going again.