Hugh MacLeod, the cartoonist known for his work on his blog Gaping Void was sketching as an artist in residence at LeWeb 2012 in London.

His hectic scratchy style was shown as the conference launched its theme, ‘Faster than Real Time’ back in April. Pop-eyed toothsome characters appeared with his trademark boxed line drawings. The style seemed to reflect the idea of a digital world packed with information.

At a specifically lit table to the side of the stage he was found, nose close to the cards he tends to draw upon, translating some of the comments and ideas from the speakers into visual forms.

MacLeod has been a well known cartoonist on the web for many years. His work has graced business cards, t-shirts, wine bottles, and countless slide decks for people who work in technology.

Though he clearly has an understanding of our digital life and times, he doesn’t come across as the tech archetype. So why is he so keen on life online?

“Ten years ago I saw that digital was the future and with blogs it was cheap, easy and global. I thought if I had 10 thousand people reading my blog, that might be source of income rather than waiting for the Guardian to publish me, so there was freedom,” he says.

It has been commented in the past as print news went through the beginnings of a revolution, that cartoonists were one of the first casualties. The resources required to keep a news outlet afloat while making the switch from carbon to digital can be costly and sometimes this means losing the pen and ink satirists we loved on paper.

MacLeod is surprisingly pragmatic about this: “I think that was a curse but the blessing was that we were the first people to figure out the new ways. Now I have a lot more job security and a higher income than if I had a daily gig with the Telegraph.” 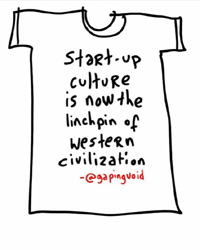 Many artists who use the web to promote their work still worry about copyright theft and the hosting of images in other places. Maybe it is down to starting early online, but MacLeod doesn’t seem to have a problem with others taking his work from time to time. “I don’t worry about that,” he says. “It’s good advertising for my brand which I can leverage for my commissioned work.”

It sounds a bit like a freemium model for artists, some will access things for free whether you like it or not, and then there are still paying customers who will purchase works, often based on the good reputation or popularity of an artist.

That might be a tough call for artists who work slowly or have few works to highlight online. It’s possible that MacLeod’s prolific nature has something to do with the freedom he has around the issue. 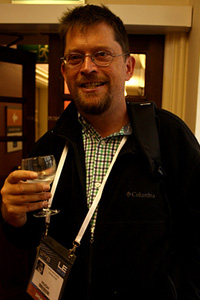 MacLeod is known for his visual commentaries on internet life – how we interact online and the changes in social habits. He admits that he does spend a fair amount of time online to do his research.

“It’s a bit like an artist living in the art world. You can be a part of it but you don’t want to be a slave to it otherwise you won’t make interesting art anymore,” he says. “You could spend your time being drunk at parties in galleries but you really need to go home and paint. I try to keep on drawing and put my stuff online.”

The change to a more social Web also seems to benefit his art as more and more people open up their lives online. “The web makes it easier to find interesting people, you don’t have to wait to be invited to the right parties anymore, you can just email,” he notes. “People are more accessible now.”

As more people arrive on the Web everyday, it doesn’t look as though he will be running out f inspiration and contacts any time soon. So it’s likely we’ll be seeing his particular style of sketch and cutting Internet observations for many years to come.

You can catch up with MacLeod’s cartoons from Leweb2012 London on his Tumblr.