I first saw the notion that “code is poetry” on the footer of the official WordPress.org site. From there on out the idea has sat percolating in the back of my head.

Certainly a programming language is, in some ways, like every other language…right? It has its own set of rules (syntax) and meaning (semantics). Like code, not everything written in english is beautiful, but when a programmer or a poet crafts something amazing, it’s easy to see how both start from surprisingly similar tools.

Looking at the phrase this way, I can’t help but believe that code is poetry, and engineer and artist Ishac Bertran is taking the comparison a few steps further. Bertran believes that code can and should be used to craft actual poetry, and hopes to merge the separate pursuits into a ground-breaking book: code {poems}

Code is the language used to communicate with computers. Like literature writers or poets, coders also have their own style that include – strategies for optimizing the code being read by a computer, and facilitating its understanding through visual organization and comments for other coders.

Code can speak literature, logic, maths. It contains different layers of abstraction and it links them to the physical world of processors and memory chips. All these resources can contribute in expanding the boundaries of contemporary poetry by using code as a new language. Code to speak about life or death, love or hate. Code meant to be read, not run. 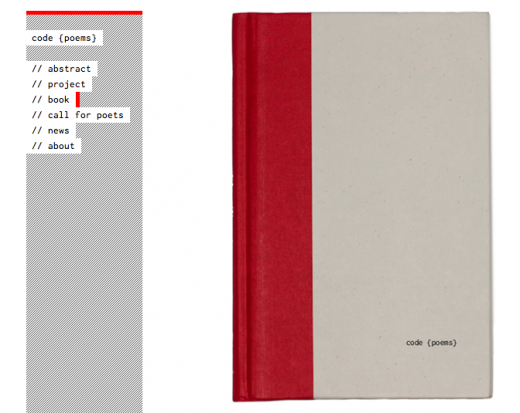 code {poems} stretches today’s standards of contemporary poetry by a long shot, but it really is a beautiful concept. The project calls on programmers to become poets, and the only rules for submissions are that the file must be less than 0.5 KB in size and it must compile.

The project aims to compile a variety of code poems from software engineers, artists and other code writers, exploring the potential of code to communicate at the level of poetry.

You can learn more about the project here, and submit your own work via the link below. Can art and tech come together to make something beautiful? We can’t help but think yes.