Every technology company wants favorable, and extensive coverage from the media. How to generate that coverage is a constant game, for most. Any technology giant, your Googles and Facebooks and Apples and Microsofts need but say something in a slightly misjudged manner, and a media firestorm can break loose. For most companies however, struggling to find a foothold in the press, and generating news clippings can be daunting work.

Denizens of the press relations world take note, for I am declaring a new policy today, one for myself, and one that I hope catches on. From here on out, I will now only meet startup executives at my house, for a drink. No more dinners with people I haven’t met yet, no more early morning coffees that leave both me and the fellow I am to meet late for work, and no more lunches that take more time to get to than to execute. My house, after hours, a little whiskey, and a decent chat. 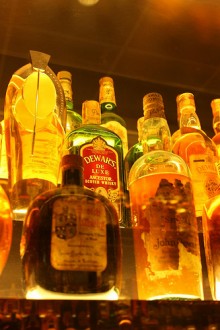 If this sounds like madness to you, having strangers into your home, or visiting the home of a stranger, allow me to provide a little context. As I mentioned, the people who pump the PR bellows are constantly trying to generate media interest in the companies that they represent. However, a story doesn’t arise out of thin air, and thus many in the PR world will offer up a meeting with an executive, usually with a fancy title, as enticement to a reporter looking to file by deadline. Little do they know that by the seventh time you are asked to meet with a CEO, you begin to wonder if the title comes in cereal boxes, and so the effect loses its edge all at once.

Just for fun, if you aren’t in the media, this is the sort of email that you quickly become accustomed to receiving:

Dear [Journalist], the [CEO/CTO/CPO/CXO] of [Company X] will be in [your city] next week. As you [have/have not] written about [his/her] company before, would you be interested in meeting up with [him/her] to hear about what [Company X] is up to?

Again, it sounds nice. I will admit that most meetings of this sort do end up being worth the while. It’s hard fare, drinking from the press release trough alone; it’s much better to get the story, and the news, and hopefully a few exclusive facts, straight from the living source.

However, no matter how great each individual meeting might be, when they begin to pile up, productivity flees. After all, most meetings lead to the beginning of a relationship, a better story, and usually an agreeable beverage. But the amount of content itself usually doesn’t rise, even with the extra hours spent to hold the meetups. Thus taking this sort of meeting can make the writer much busier, but not with too much more copy to turn in.

Thus the issue, how to keep all the excellence of meeting the people on the ground who are building the companies that we will all know of soon enough, and yet not employ every evening in the week for work, leading to burn out and general discontent.

My little solution, the dropping by to my place for a drink solves that problem, and others as well. Coffee shops are poor meeting places, everyone knows. Lunch is never great with people you don’t know, as it always feels more awkward than it should. Dinner can be quite fun, but only if the other party is willing to engage in a bit of shop talk and loosen up. And drinks are nearly perfect, if time consuming, but always take place in locales that are too damn loud. Therefore, all venues have their weaknesses. A cleared room, a bottle, a plug, strong wifi, and enough quiet for a real conversation is what is needed, and except at home you won’t find all of those things in one place.

When I first decided on this plan, some weeks past now, I was utterly unsure of how well it was going to work. I honestly expected PR folk to reject it outright. To the contrary, all meetings that I proposed in my new fashion have been accepted, executed, and have been excellent.

I don’t have their permission to do so publicly, but I can state that various guests to my residence have noted that the format was quite amenable to a good laugh, and a real in-depth dive into their product. And this in Chicago, a city that is far harder to scoot about in than the relatively compact San Francisco.

Of course, in a city that is impassable, the rules might have to be bent.

I’ve learned that a personal relationship is the best possible thing to have between the leader of a company, and the press that covers their work. Obviously, this arrangement assume that both parties have scruples. When that relationship exists, emails can flow more easily, questions are answered more bluntly, quotes given in confidence that they will not be bent, and so forth. Obviously, what I meant by scruples is that the person on the writing end won’t treat the person any differently than if they were a stranger, and that the startup executive doesn’t expect a wit more than if they didn’t know the person at all.

It carries over into your world too. Have something to discuss with the boss, or perhaps a new client? Try inviting them over for two fingers of your favorite scotch instead of suggesting another dinner that you’ll just write off for your taxes. You’ll be amazed.

That familiarity can be forged over email, instant messages, the phone, but is best built in person. In my view, if you are going to take the time to meet up, do it right. And that, my friend, is why I have tech CEOs over to my house for a glass of whiskey.