Navigation app Waze hit the headlines over the past week for the $1.15 billion that Google paid to acquire it last year – not to mention hints that the company might not have quite been ready to become a small cog in a big machine.

Now several months down the line from the closure of that deal, TNW sat down for a chat with Julie Mossler, senior director of communications at Waze, to catch up with the social navigation company’s progress and talk about the potential future growth – and independence – of the service.

Billion-dollar deals and the backing of one of the world’s largest Web companies aside,  it’s the strength of Waze’s community that is one of its strongest assets, and a big driver of growth into new regions, Mossler said.

“We launched in every market without any PR or marketing… With us, the fact is, if one person downloads the app and gets in the car and drives they’re building the map in that city. So, we don’t really have a particular launch date for any market, it’s just whenever the critical mass gets together and starts using it.

“Historically, it’s pretty amazing that we were able to get to the point of being acquired by Google without ever doing that PR or marketing, but now, we’re still independent – we operate separately from Google Maps or Google – and it’s time for us to identify markets with a lot of potential, and maybe those that haven’t gone anywhere.”

Germany, for example, seems to be one of the markets with less than stellar uptake, although Mossler reminds me that there are still “thousands” of users in the country. Regardless, compared to other markets that it is active in, growth in Germany is slower. She attributes this particular challenge to the high percentage of people who already have satellite navigation systems built into their cars.

So, wouldn’t the obvious move – and not just in Germany – be to aim for some sort of Waze integration in vehicles? Mossler says not.

“[Auto-partnerships are] traditionally something that Google has done with Google Maps. We don’t have any plans right now.”

Part of the family 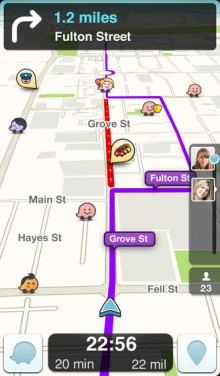 However independent Waze remains, it’s hard not to talk about Google. Despite the aforementioned recent headlines, Mossler says the deal has resulted in the best of all worlds for Waze: ultimate freedom, talent on tap and a corporate check book.

“Google has been wonderful in that we’re still largely autonomous, and they’ve let us just run at our speed, but with their resources, which is kind of an incredible position to be in.  So, by resources I mean we attract really strong talent now, because we have access to Google’s headquarters and they support us.

“I wouldn’t be able to come and meet you in person on a startup budget. As we get more into business development, that’s incredibly important, so it’s incredible that they’ve sort of left us to our own devices.”

With all the resources the company needs, the challenge isn’t deciding what new features it should add, it’s about keeping focused on its core mission. It’s more important to decide what it definitely doesn’t want to do, to ensure it stays on track.

“Because we are so flexible, pretty much anything you can think of to do with the app is possible, but that doesn’t mean we can consider everything, and many are distractions. So it’s our job to pare down what our focus is and remain committed to a common goal. Could we do cars? Of course, but it’s not really achieving what we want to achieve right now.”

What it wants to achieve right now is penetration in new and slightly floundering markets. One of the ways it plans to do this is through media partnerships, providing the traffic info for local radio or TV stations, for example. In the UK, radio is seen as the more likely of the two due to a lack of limited local TV.

Even without these deals, Mossler says Waze has a strong footing in the UK – and it’s already home to several of its top-performing community members; the engine driving Waze.

“The UK is one of our top markets. That’s pretty exciting because that’s an accomplishment of local citizens, Waze doesn’t take the credit for that. We have about 80,000 active regular users in the London area alone, without much interference from us.”

Mossler’s not kidding either, the number of contributors is impressive and a reflection of its success in building a strong community element. Those social skills were baked in from the start, not added to a mapping app retrospectively, which is the key.

For users, there are three ways to contribute to Waze’s ongoing refinement: just drive around with Waze open (this helps build maps), report accidents, roadworks or police on the map, or edit the map using the desktop editor.

It’s this last part that really seems to strike a chord with ‘Wazers’: there are 1,000 times as many map editors as Waze employees – 140,000 volunteer editors versus around 140 employees.

“Waze is the people’s map and people’s technology. If you live somewhere like Ecuador, there aren’t road sensors in the road that are going to update your village on the map, you may get a new map every 10 years. But if you live in Ecuador, it matters to you. If you live in the countryside in the UK, and there’s a pothole in your neighbourhood, that matters to you personally.

“It’s hard to see what you get out of it the minute you report a cop on the road or an accident, but with editing the map, you’re naming your street, or tomorrow we’ll [Waze] wake up and there’s a sub-division there thanks to you.”

To learn the editing process takes just a few minutes on the Waze website, but you’re not let off the leash straight away.

At first you get just “your own backyard” to edit, Mossler says. But the more you edit the map, the more geography you earn. And what stops any rogue map editors from renaming a local landmark as their own name, or something worse? The system is totally self-policed.

“There’s a whole community above you that worked their way up, so they’re not going to let you undo the work they’ve been doing,” Mossler said.

With such a strong investment in the sense of community from its users, not to mention time editing maps, the promise to keep Waze operating as an autonomous entity away from Google’s meddling will likely be an important one in its long-term success. It’s rather hard for a company working at the scale of Google to keep a product feeling as personal as Waze already does to its most loyal users.

Indeed, there are no plans to make it feel like less of a community, or less sociable. In fact, with our whistle-stop briefing drawing to a close, Mossler revealed that there will be socially-oriented Waze update rolling out in the next month. Keep your eyes peeled.