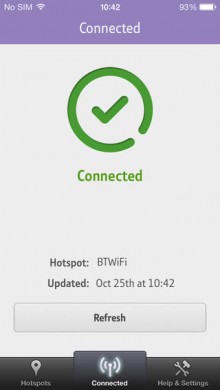 BT has rolled out an interesting update to its BT Wi-Fi app for iOS, one that means your iPhone, iPad or iPod touch can automatically connect to a BT public WiFi hotspot as soon as you’re in range.

The app is also available for Android – which is already enabled with this auto-connect feature – BlackBerry and Windows Phone, though there is no word yet on whether the update will be arriving soon for those platforms. However, BT did confirm that it will be launching an app for Windows 8.1 that will have similar auto-connection functionality, with users able to see if they’re online with the live tiles on the home screen changing color to reflect status.