Following the deal, Printi will start attending offset, large-size and high-volume printing requests made in any of AlphaGraphics’ 23 print stores across Brazil. In practical terms, it will be providing the franchise’s offline clients with a tailored version of its existing solution, while helping it diversify its offering.

“We will be integrating our online platform www.printi.com.br into [AlphaGraphics’] customer service terminals, in a slightly adapted format,” Printi’s CFO Mate Pencz explains. “This means that if a customer walks into one of their franchises, for example, depending on the type of product, the customer service representative will quote the price through our platform and order the product for the customer directly on our site. The orders are then automatically processed in our system and produced in a quick turnaround at our large, central printing facility outside of São Paulo. We then deliver the product to the store locations where the customer can pick-up the materials and finalize payment.”

According to Pencz, the demand Printi will attend is already responsible for a significant share of AlphaGraphics’ turnover – which also includes revenues from its marketing and business services. As you may know, the 42-year-old company is well established in its segment, and has a global network of 280 points of sale around the world.

If you are wondering why it decided to partner with a startup like Printi, the answer is simple: increased efficiency. “The store locations will be a lot less reliant on their relatively small printing machines (which are expensive to maintain and keep in these high-end real estate locations) – especially for larger orders, as they will be able to rely on us. More importantly, our centralized, industrial production enables us to offer higher-quality printing at a lower price (given effects of scale),” Pencz details.

On the other hand, having an offline presence will help Printi expand its customer base, and convince new users to make print orders online. Pencz confesses this behavior shift is crucial for Printi’s success:

“Given that the print industry remains quite old-fashioned and “traditional” in many ways, we are constantly faced with the challenge of making the purchasing process for print products more seamless and educating the customer about these advantages — especially as it comes to more efficient production and cheaper prices,” he says.

While Printi only started operating last August, the startup has already reached noteworthy milestones. In addition to the new partnership, its CEO Florian Hagenbuch unveiled that his company has printed over 3 million products since its launch. 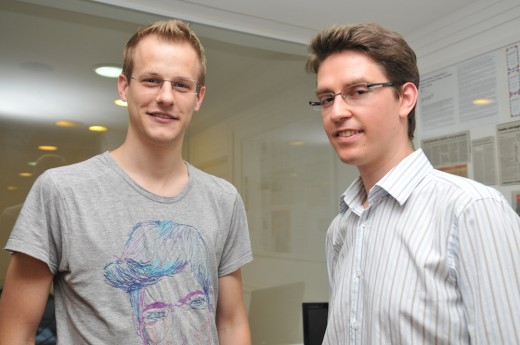 Hagenbuch himself acknowledges that the fact that his father worked at a major printing machine provider allowed him to get his foot in the door and get the first partnerships Printi needed to get started.

However, connections only get you so far, and that’s where the background of Printi’s founders comes in. Both Hagenbuch and Pencz have resumes that speak for themselves – their respective academic credentials include Wharton and Harvard. They also have a good knowledge of Brazil, where Hagenbuch has been living since the age of 4. As for Pencz, he developed a keen interest in emerging markets when working at Goldman Sachs and Morgan Stanley.

In other words, there is more depth to Printi than you may think, and its founders’ vision goes well beyond launching a copycat. While similar Web2Print companies already operate in Europe and the US, the concept is still new in Brazil. This makes it a huge market to tap into, but it also means that Printi can have a more disruptive impact than its foreign counterparts. As a matter of fact, the printing industry in Brazil still lacks transparency and affordable pricing, which means that a startup like Printi can help democratize this segment as a whole while it transitions from offline to online.

Unsurprisingly, this combination already caught the attention of several investors. As you may know, Printi raised a $1.2 million Series A round last August from backers that included Silicon Valley-based firm Greenoaks Capital, as well as several entrepreneurs turned angel investors such as OLX founder Fabrice Grinda.