It’s no secret that audiophiles and hi-fi enthusiasts are skeptical of wireless speakers. Sure, there are some successes – KEF’s LSX is a recent example – but wireless technology typically degrades sound quality at least a little, and almost certainly introduces some degree of latency. Hi-fi manufacturer Bowers & Wilkins claims to have solved these problems with its new Formation suite of wireless products. I had the chance to listen to the speakers, and they’re like Sonos on steroids. Expensive steroids.

The Formation family consists of five products at launch.

But the real star of the show is the wireless technology behind the speakers. While the speakers will connect via Wi-Fi to stream via Spotify Connect or Apple’s AirPlay 2, and they support high-quality Aptx HD and AAC Bluetooth, the units communicate with each other via a proprietary mesh network. This network has a ridiculously low one-microsecond latency. Again, microsecond, not millisecond. That means any latency from the source would be completely inaudible to human ears. They’re also capable of streaming at 96khz/24-bit resolution, safely in hi-fi territory.

I’m going to focus primarily on the Duo, as it’s the flagship of the family and the most interesting model. It’s clear B&W isn’t just trying to jump on the wireless bandwagon; despite the futuristic design, it borrows heavily from B&W’s traditional speakers. It has the same 6.5-inch ‘Continuum’ woofer on the company’s 800 Diamond series. The tweeter is borrowed from the 700 series. To this, it applies custom DSP and Dynamic EQ with custom tuned internal amplifiers to boost performance further. 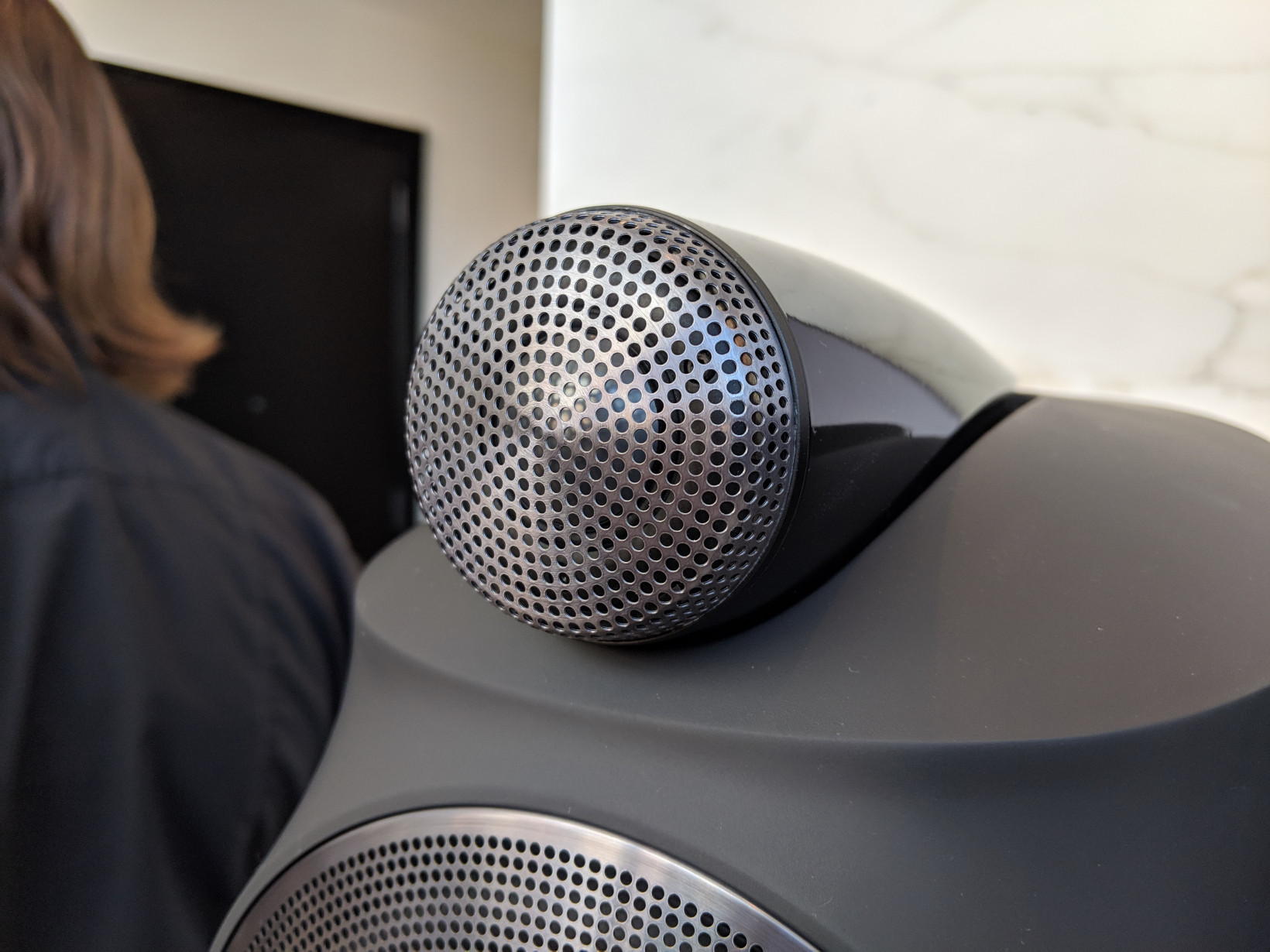 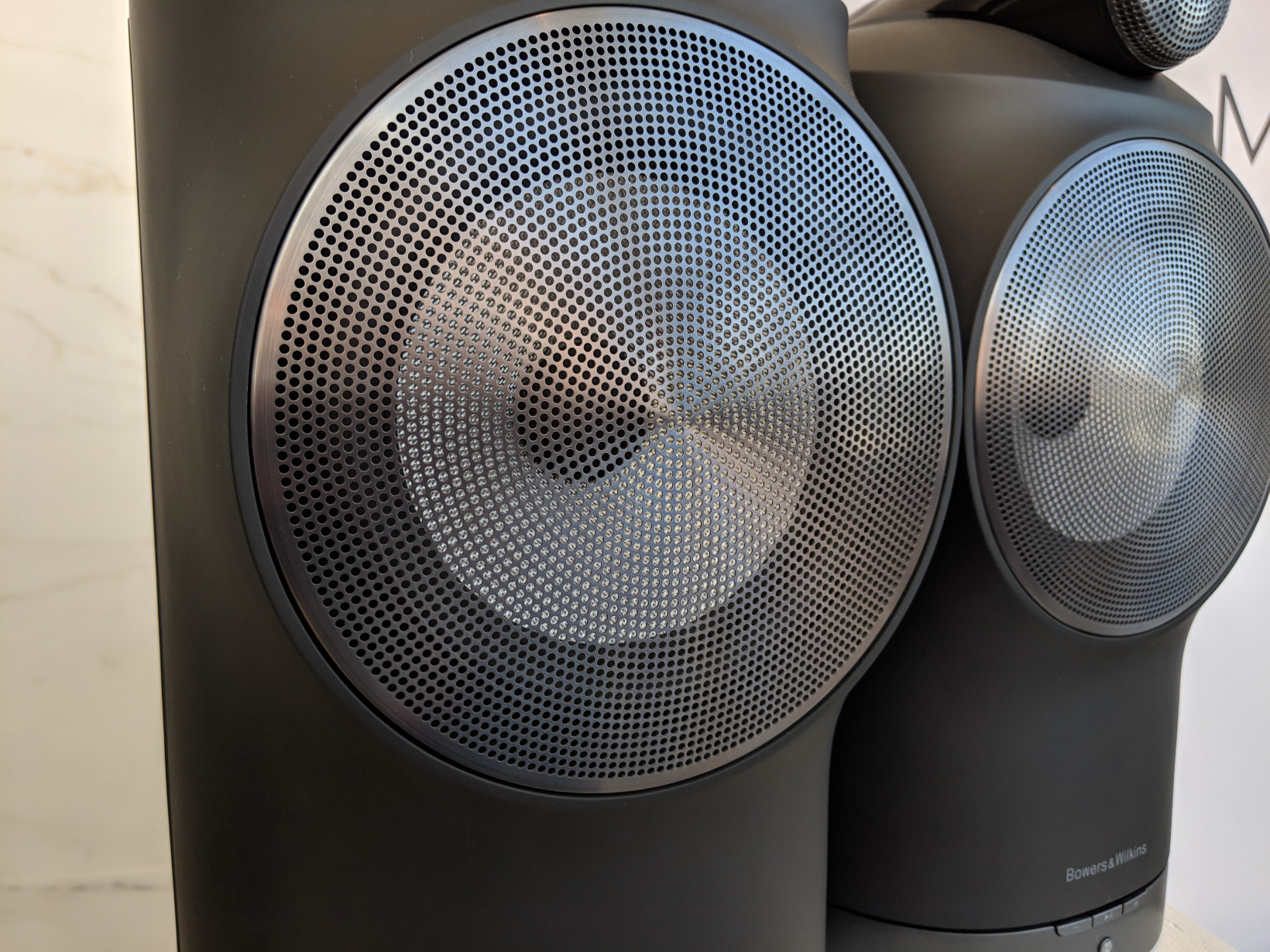 After B&W played a few tracks of different genres, including a few I was very familiar with, my initial impressions of the sound were quite positive.  I’m reticent to describe the speakers too much without listening to them in my own home, but a few things were apparent.

One, it’s obviously better than the typical mainstream wireless speakers. I would hope, for $4,000. I was sitting in the sweet spot, and tone, imaging, and soundstage were all obviously beyond what I’ve heard from a wireless speaker system, except maybe the KEF LS50W I use at home (and those aren’t truly wireless). The sense of dynamics and refinement made the Duos sounded like true “hi-fi” speakers, though I’ll save you from any more audiophile mumbo jumbo until I can spend more time with them.

Two, these things have bass – good bass. B&W rates them way down to 25hz, so a subwoofer will be overkill for most people. Granted, it’s not clear what method B&W is using to arrive at that figure, but the company played Beyonce’s Partition during the listening demo, a song I happen to use to test every speaker and headphone I review. The initial bassline is basically a sweep from about 65hz to the 20s, so it’s an easy way to get an idea of a speaker‘s bass extension. Most speakers simply wimp out halfway through. My KEF LS50W doesn’t make it all the way. The Duos did.

Three, these are lookers. The curvy shape might not be for everyone, but I think the Duos are stunning. It’s nice to see an audiophile-grade speaker that isn’t just another boring wooden or glossy box.

I also got a chance to listen to the Formation Bar, and it also provided impressive performance with music and movies alike. It was definitely more refined with music than I typically expect from a soundbar, though obviously a step behind the Duos.

My problem with the Formation line is its lack of additional features. For one, I’d have liked to see at least some degree of room correction. You speaker‘s placement can dramatically alter the sound – a speaker in a corner often sounds boomy, for instance. Many digital speakers include software or buttons that allows you to account for placement, or even calibrate themselves automatically (See: Sonos TruePlay).

Second is the lack of wired inputs. The Bar only has an optical port to connect to your TV. The Duos have no wired inputs at all. No USB, optical, RCA or even an aux jack. For that, you’ll need to shell out an extra $699 for the Formation Audio.

I’m all for making wireless tech better, but this needn’t come at the expense of useful features. I don’t know about you, but I don’t know anyone who only uses their fancy stereo speakers for streaming music. They usually double as TV or computer speakers. Sure, some audiophiles have dedicated listening rooms, but I imagine they must be in the minority. If you want to services other than Spotify or Apple Music without Bluetooth or Roon, you’re out of luck. Even Sonos, a more “techy” audio company, provides an aux jack.

Thankfully the Formation Audio maintains the system’s micro-second latency, so adding other sources shouldn’t impact sound quality, but it kind of defeats the purpose of wireless if you have to attach another power cable just to connect the Duos to your TV or turntable. I’ll never get why companies think they need to remove useful functions to make a product simpler. See: the loss of the headphone jack, a smartphone trend that’s benefited no one except dongle manufacturers.

Then again, if you’re willing to spend $4,000 on a pair of speakers, perhaps that extra $699 won’t faze you, and I’m giving B&W a pass for now because the speakers sounded so good. Bowers and Wilkins CEO Greg Lee says that the Formation suite is “proving that wired fidelity can be achieved wirelessly.” The wireless tech is unprecedented, so if the Duos can deliver on its acoustic promises in long-term listening, B&W might just be able to justify the hefty price tag. Stay tuned for further thoughts once we get our review unit in.