This article was published on December 12, 2008

“Everybody wants communication, why the hell do we need to pay for that?” That’s Antti Ohrling, founder of BLYK, talking at Youthwatching ’09 – a marketing conference in Ghent, Belgium. He started a free mobile network for young people, funded by advertising. Mind you, it’s quite a success – BLYK is the fastest growing interactive media outlet for young people in the UK.

Yes, there are actually some British teens lucky enough to make their calls for free. You know how much money that would’ve saved me?

“Most advertising in media shares benefit with the audience. Take the skin creme sample in a magazine for example.”, Ohrling explains. “What’s different for mobile? Exactly, nothing. What would happen if somebody would offer free calls and text for advertising? An operator would become a media company.” 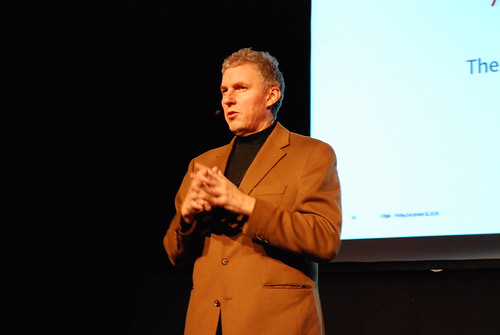 There’s no contract, no phone bill

BLYK focused on youngsters, as they’re a hard to reach but a profitable target group. Ohrling: “If you talk with them and use language they understand, then you have to change to get involved.”

One of the brands British kids most distrusted were operators, so BLYK had to develop a different way to talk to them. Here’s what Ohrling came up with it: there’s no contract, no phone bill. But you do have to get invited. (so that BLYK can get a balanced target audience).

When invited, people had to complete personal profile online so that BLYK can target the advertising better. 95% of the 200,000 people did so.

“If there’s a balance between value for advertisers and customers, BLYK is a success”. Well, it seems like that’s the case. The 2000 campaigns had a 25% average response rate. Normally this rate for mobile advertising is four percent. BLYK has 200 brands on board, of which 66 percent did repeated business.

The obviously proud BLYK founder mentions some success stories. Like a Will Ferrel trailer, 44 percent of the users requested to see it. A Penguin book, Slam by Nick Horby, was also a blast on BLYK. 67 percent wanted to hear a Skins star reading the first chapter out loud. Lucozade supplied users with free drink vouchers. 35 percent was redeemed.

BLYK has the highest net advocacy score among mobile networks in the UK and is closing in on YouTube and Facebook. Why? Ohrling: “In mobile marketing, interaction is key. The power of the question is much higher than the power of the answer. Make people think, and they engage with you. If they engage, you’re in the game. We’re in the game”.

British youngsters become slaves to advertising to avoid paying phone bills. Why wouldn’t they? What are the negative consequences for them? Other than clicking ads away.., none.