Apple has some timeless, gorgeous designs under its belt. Chargers don’t fall under that category, but a new accessory called the Blockhead can help.

It’s a simple little thing, but exceedingly smart. Rather than prongs that face forward, Blockhead’s look east. A charger that once needed four inches of clearance now only needs just over one inch — and the cord faces down.

Meant for the larger MacBook chargers, Blockhead is universally adaptable for the iPad or smaller Retina MacBook (anything rated 12 watts or higher). TenOne Designs, the company behind Blockhead, notes the original iPad mini shipped with an iPhone-style charger. 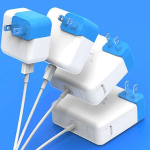 If you’re looking for a flaw, it’s probably that the prongs don’t retract or fold in. If you like to travel with your charger in-tact while stored in a slim bag, Blockhead won’t do. To get the same slim profile during travel, you’ll need to snap it off the charger.

Still, the tradeoff of having a low-profile charger may be nice. Just be mindful of your situation; if you were sharing a power strip (say at a hack-a-thon or tech event), Blockhead would probably annoy everyone around you if it meant your charger was blocking outlets.