There was a time, not so long ago, when I was in love with my BlackBerry. I owned a Curve, my wife had a Pearl. We thought that they were incredible. For their time, they really were powerful devices. When the iPhone came out, I remember seeing the commercial and thinking aloud that it would be incredibly cool if it could actually operate the way that it showed on TV. I, like many others, abandoned my BlackBerry for an Android phone, and then an iPhone. But if RIM has its way of things, the release of the Z10 will start shifting the winds back in its favor.

I think that, in order to best understand what the Z10 is trying to accomplish, we have to first look at what it’s not trying to do.

In that realm, it’s not trying to out-iOS the iPhone, nor is it trying to out-Android an Android device. iOS is known for its simplicity, Android for its ability to be customized. The Z10 is neither overly-simplistic, nor is it highly customizable. It’s a bit of a WYSIWYG device, but it works well for how BlackBerry is operating. It’s not the thinnest, or the lightest smartphone on the market. It doesn’t boast the best camera or screen that you’ve seen either.

So why would you want it? Because it has a load of redeeming features that the BlackBerry devout will love, and the company has spent its pas couple of years doing some serious homework. The decision to buy a Z10 comes down to how you feel about BB10, and we’ll get into more on that in a bit.

About the closest thing that BlackBerry (RIM, at the time) ever did that resembled aesthetic design was the release of the Pearl. The device wasn’t as wide as the rest of the BlackBerry lineup, but it managed to still be very much a BlackBerry in operation. It wasn’t groundbreaking by any means, but it was well received.

The Z10 could be seen much the same way. It’s thin, but not the thinnest. It’s light, but not the lightest. The screen is good, but not the best and the feel of the materials is solid, but not on par with, say, the iPhone. What’s left, however, is a rather great-looking device that fits well into your pocket, is easy to hold and operate with one hand and manages to be better in just about every way than non-flagship devices from any maker.

The outside of the Z10 is sparse. There’s a volume rocker, a screen power button and two ports on the side — one for micro-USB and another for HDMI. There’s a silver BlackBerry logo on the bottom, and another on the back. The patterned feel to the back of the device is nice, and manages to keep it from getting slick when handled for long periods of time.

Overall I found the Z10 very pleasant to use. It didn’t elicit oohs and ahhs when I took it out of my pocket, but that’s probably not what you care about. Though I will say that it’s by far the best looking BlackBerry device to date, the utilitarian design is almost surely done with business-oriented people in mind.

If you’re going to move away from physical keyboards and make the screen the showcase of your device, then it had better be good. For that task, BlackBerry went with a 4.2-inch, 1280 x 768 pixel display at 356 ppi. That’s a slightly higher pixel density than the iPhone 4S, which means that it does look incredibly good. Colors were rendered well, video looks excellent and the entire spectrum is delivered accurately.

The camera on the Z10 is good, but definitely not great. Photos tended to be darker than I’d have liked to seen them, and were most definitely darker than comparison shots that I took from my iPhone 4S. The camera app tends to lose focus easily, and operating it with one hand is more difficult than it needs to be. Adjusting focus points requires you to manually drag the reticle to the area that you want and then wait for the software to focus the lens again. 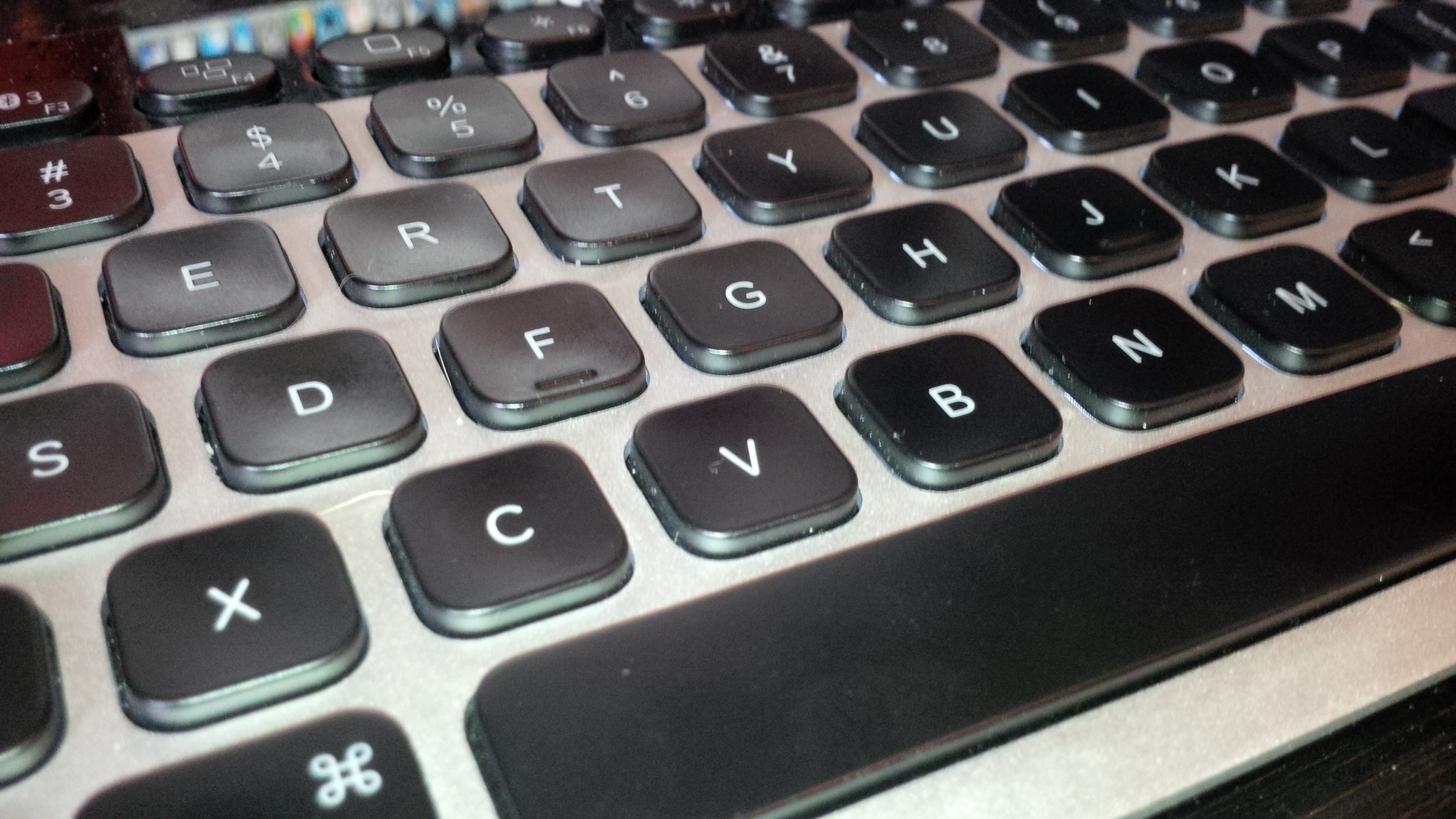 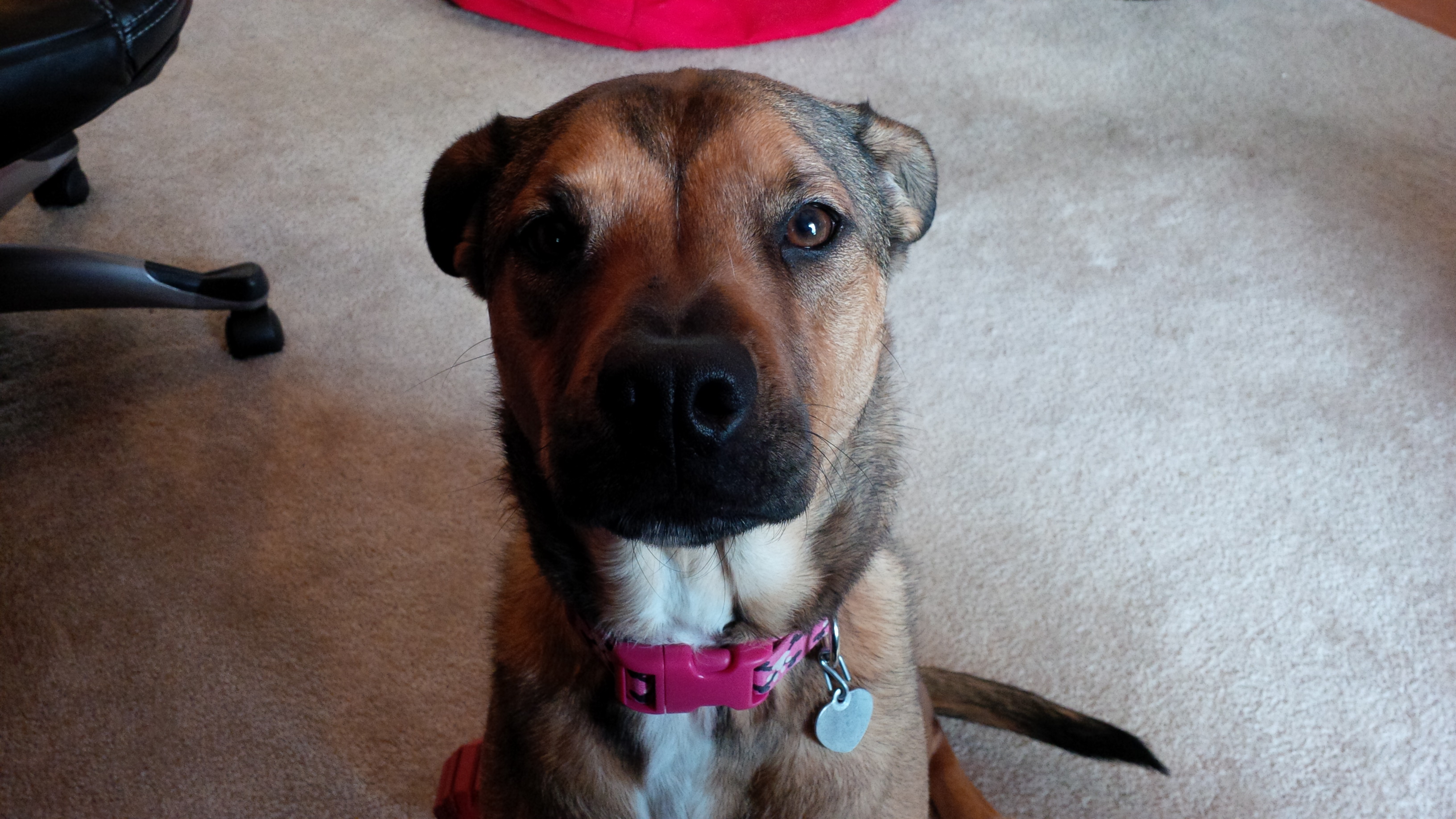 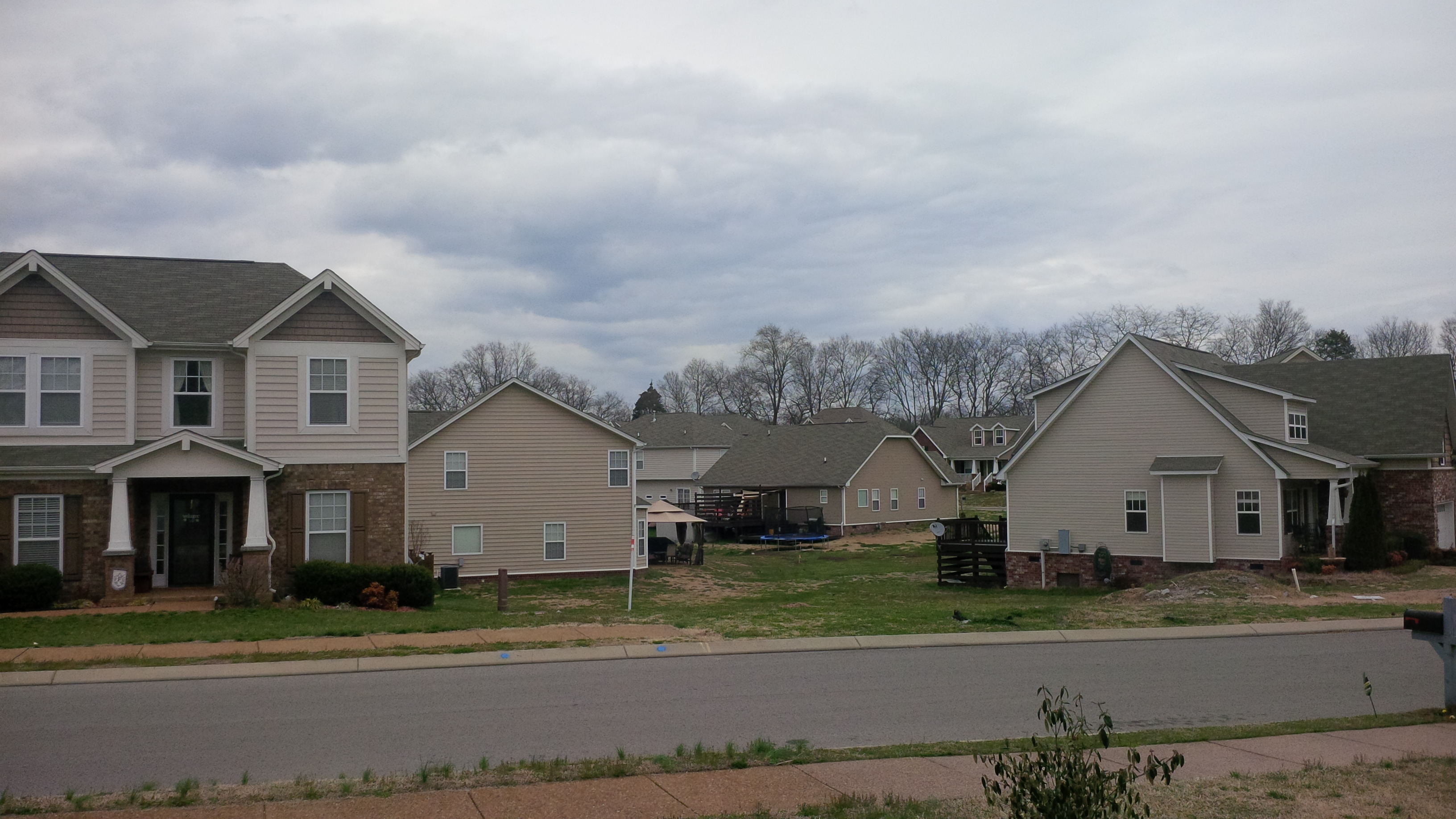 Battery life on the Z10 wasn’t fantastic, with the 1,800 mAh power cell clocking in a bit over 8 hours of straight video. I was able to make it all day, using primarily WiFi, without having to charge the device, so there are points to be given for the Z10 accomplishing something that my iPhone can’t do.

I promised myself that I wouldn’t make this a review about BB10, and I’m going to stick to this as best as I can. But you really can’t talk about the Z10 without mentioning the OS, so I’m going to take a few sentences to talk about that now.

BB10 is the most radical departure from previous BlackBerry OS versions that the company could have made while still holding true to its rabidly-loyal base of fans. Multitasking is probably my favorite feature of the OS. It uses WebOS-style “cards” for apps that are running in the background. Tapping the X on the bottom right of one closes out the app, while tapping anywhere else brings the app back to the forefront. It works exceptionally well.

Gestures within BB10 are also well done. Swiping up from the bottom edge of the device wakes it up and takes you to your last-used screen. Swiping all the way to the right reveals the BlackBerry Hub, which is an integrated inbox of your email, BBM, Twitter, Facebook and just about every other communication account that you can add to the device. 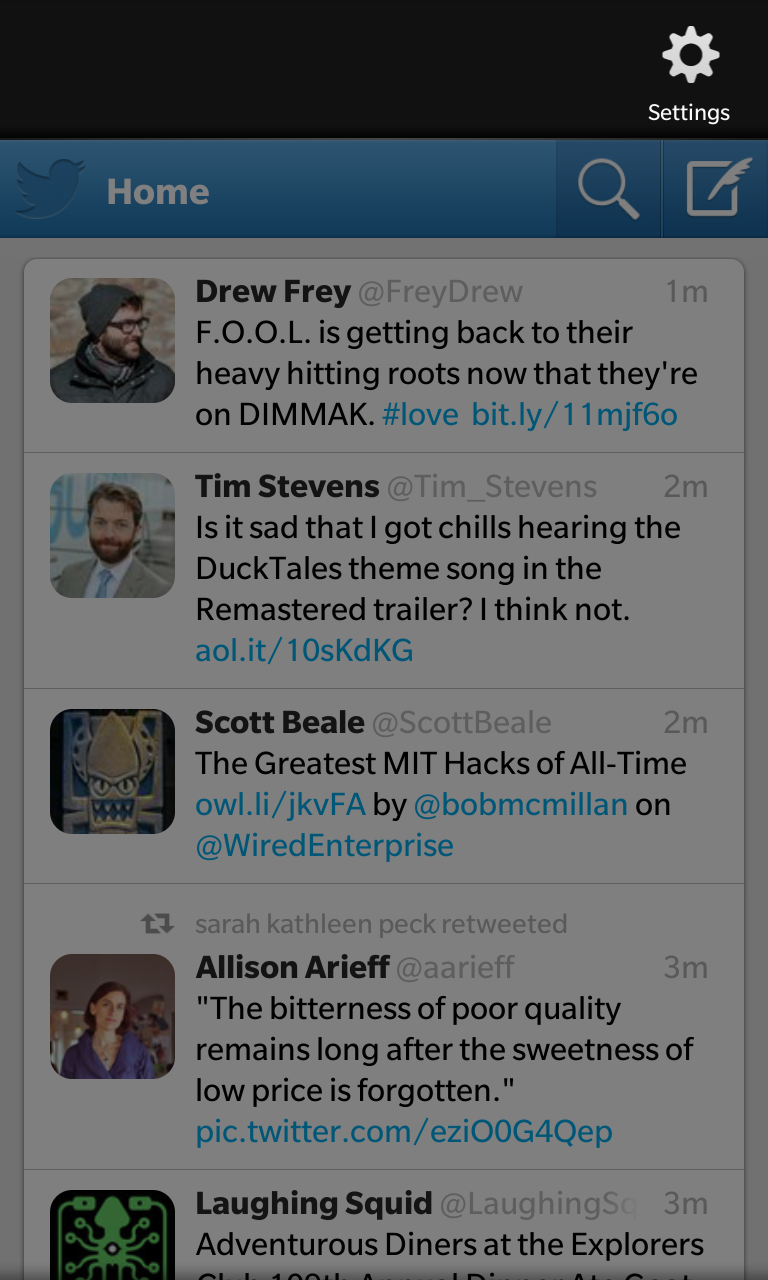 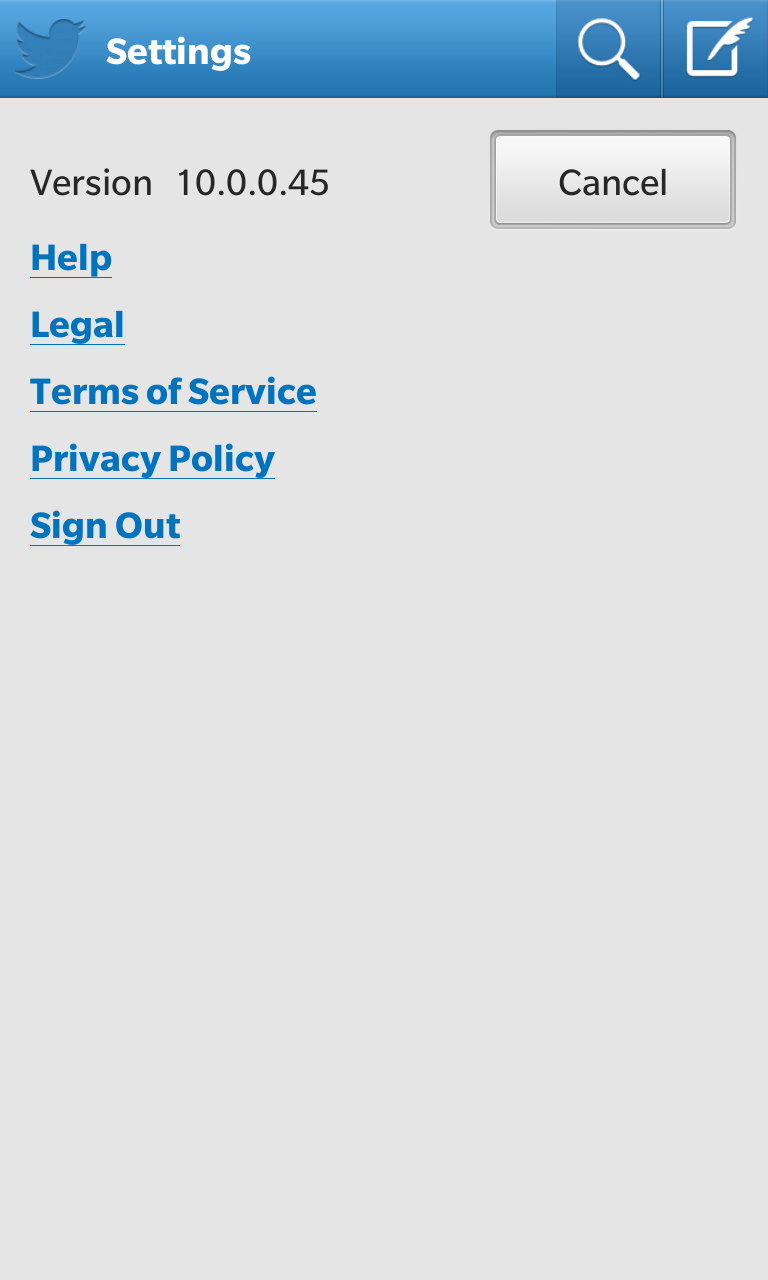 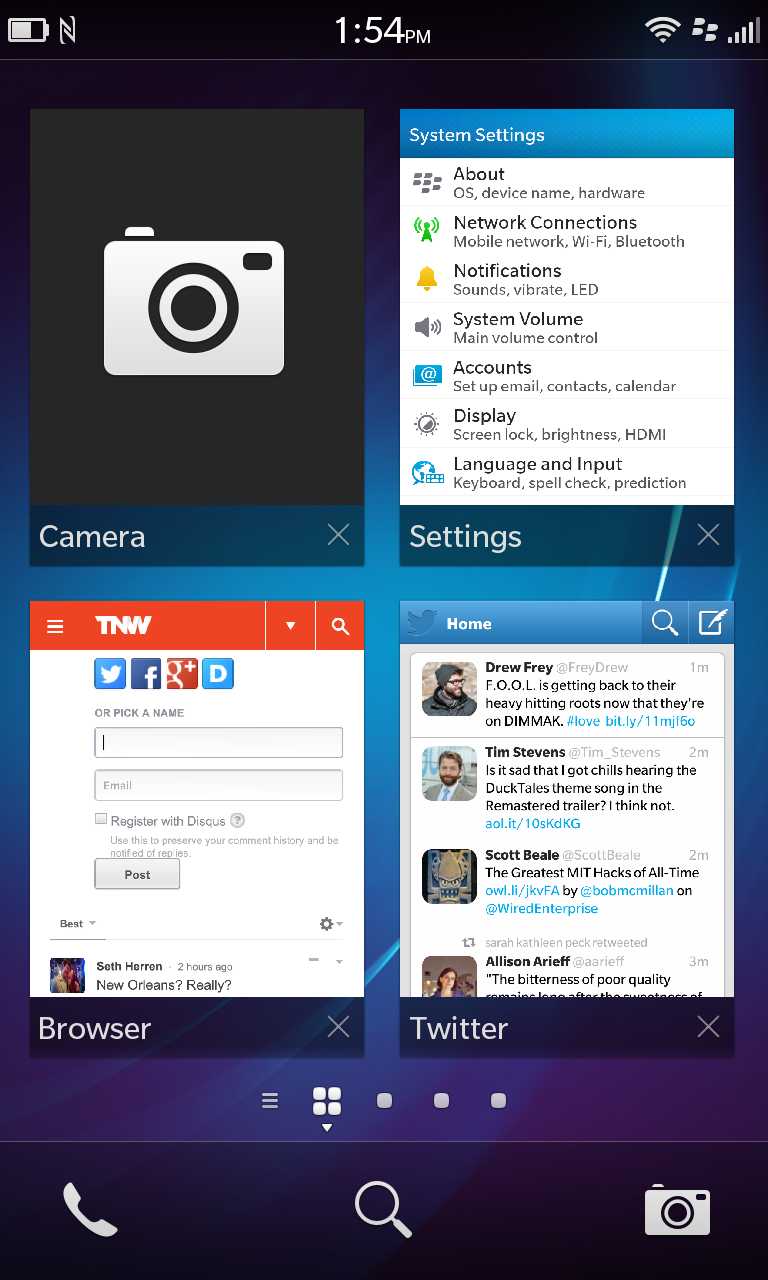 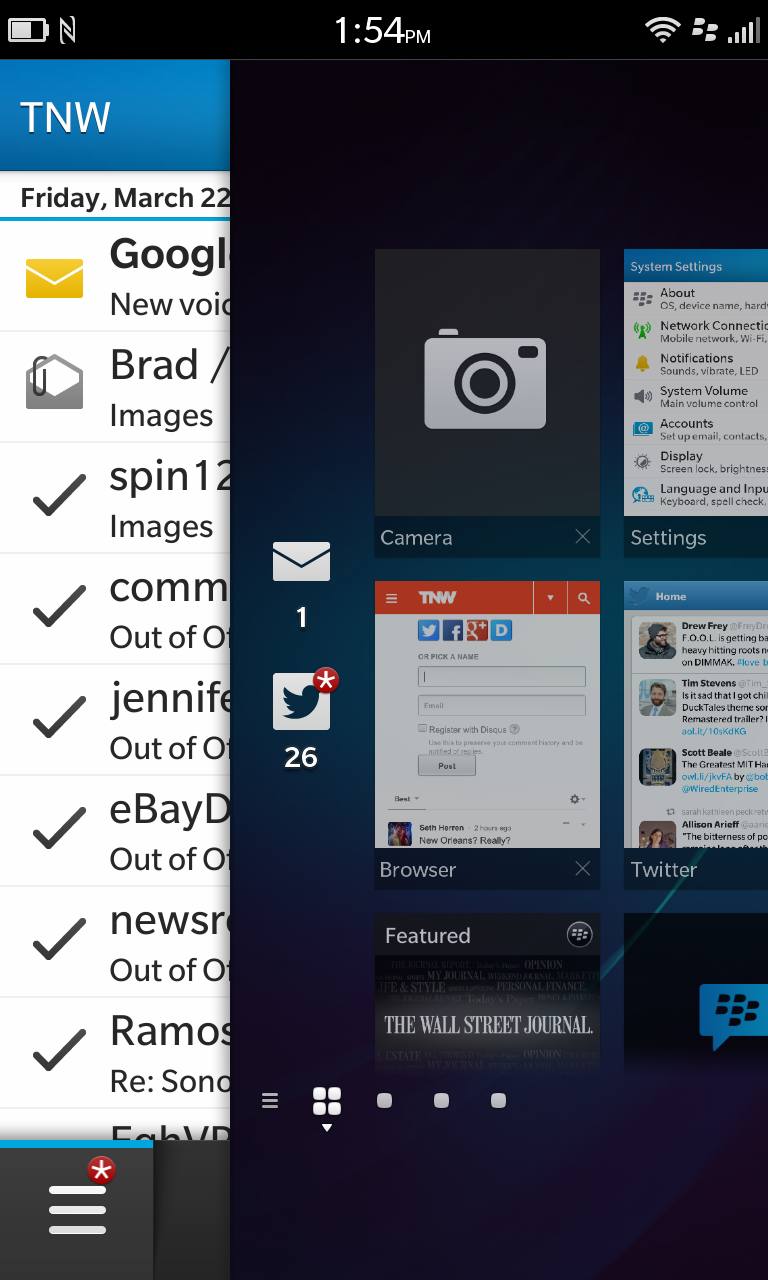 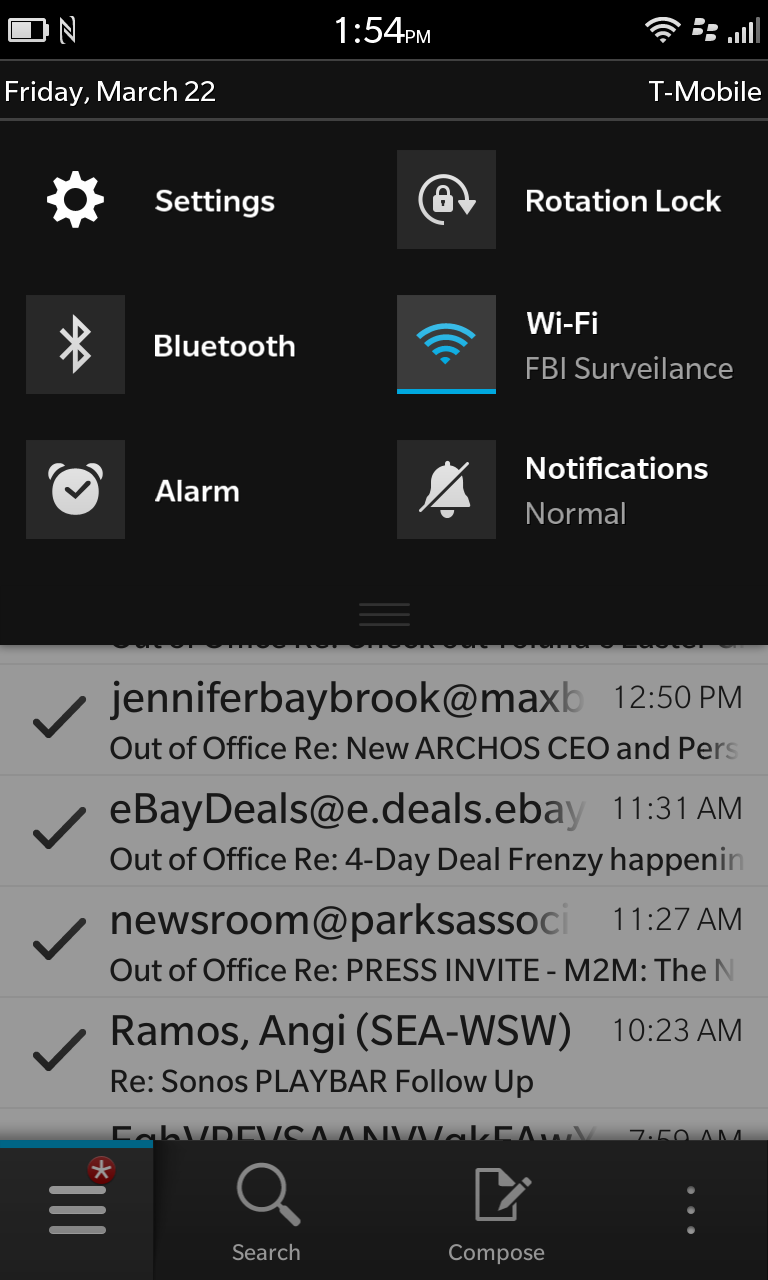 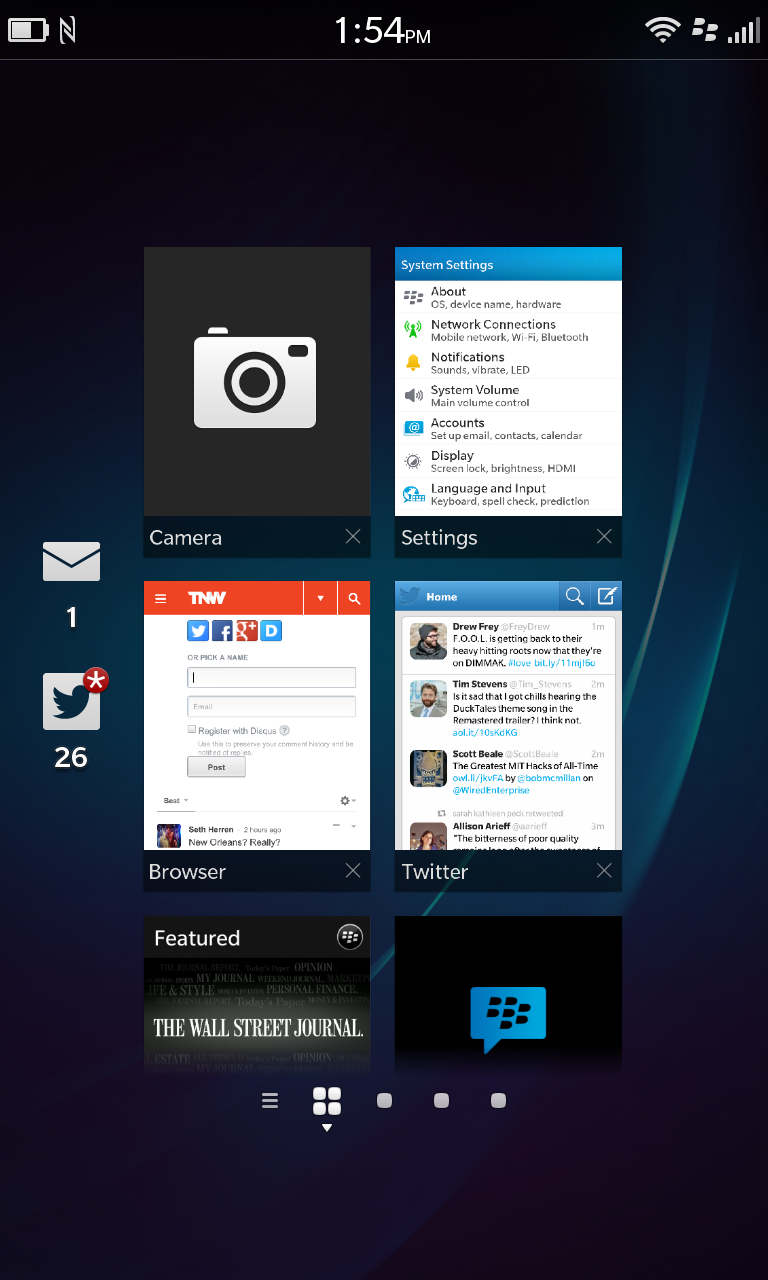 Peek is the feature that I think most people will ignore, but it’s very powerful. Swiping about halfway up from the bottom of the screen will show your unread message count. If you then swipe to the right (making an upside-down L shape) you’ll go straight to the Hub from whatever screen you’re presently on. Swiping down from the top of the screen takes you to the settings for whichever app that you’re using. If you’re on the home screen, it takes you to shortcuts for WiFi, rotation lock, Bluetooth and others. I found that most apps didn’t take nearly enough advantage of the Settings feature, but those that did were a pleasure to use.

The apps are a bit lacking, but you’ll find the standards such as Twitter, Facebook, Kindle and many more. Though BlackBerry is touting a catalog of over 100,000 apps, it’s worth noting that many of these are local translations of the same app, or they’re simply trash apps that you’ll never want to use so the number is a bit disingenuous. The OS itself is fantastic, even if the apps aren’t. It’s apparent that BlackBerry has spent a lot of time making BB10 true to what its core users would want, while trying to find a method by which to claw its way out of a rut.

The Z10 is launching in the US today, and it’s going to be a big deal for the future of the company. There’s the Q10 cousin if you want a physical keyboard, so BlackBerry isn’t betting the farm on the touchscreen. But it really does need to sell well in order for the company to keep moving forward.

Whether or not you’ll want to buy it comes down to a single question — Do you want the BlackBerry OS? Facing facts, everything about the Z10 is very good. But nothing about it is fantastic. As a device, it’s on par with top-tier offerings from other OEMs. If you like the BlackBerry OS, there’s really nothing to be disappointed about when it comes to the phone itself.

But herein lies the problem — As compared to Android or iOS devices, there’s nothing to be overly excited about. Yes, it has NFC, a great display and perfectly acceptable battery life, but so do many other phones on the market today. The excitement is truly limited to those people who have been waiting to see BlackBerry translated into a more modern device. For that market, the Z10 is the first, major step in the right direction.

If it sells well, and if the BlackBerry faithful can make it a hit, then the company can perhaps chip away at the massive domination that iOS and Android have on the mobile market. With 98% between these two, a few points shaven off and handed to BlackBerry could give it a strong #3 spot and bring the company back from the edge of obscurity.