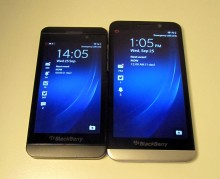 BlackBerry has announced that the latest version of its BlackBerry 10 operating system (10.2.1) will start rolling out to BlackBerry devices around the world from today.

The update is scheduled to start rolling out to all BlackBerry 10-based devices (subject to operator approvals) in the US, Europe, Canada, the Middle East, Africa, Asia Pacific and Latin America and brings “hundreds” of new features to the platform, BlackBerry said. Among them are actionable lock screen notifications, the ability to create SMS and email groups for mass mailing, and new filters for the BlackBerry Hub to allow users to more easily find what they’re looking for.

It also introduces the option of setting a picture password for a device, a new customizable quick settings menu and an offline browser reading mode. BlackBerry has also included a new device and battery monitor too – which provide users with details on battery usage, the impact of installed apps (on battery life) and memory usage and storage, as well as CPU stats. For Z30, Q10 and Q5 owners, the update also unlocks the built-in FM Radio present in the devices.