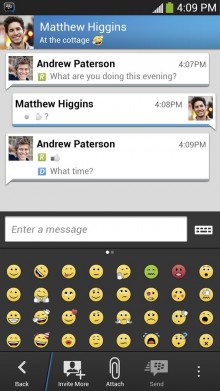 More than three months after launch, BlackBerry has announced that it’s now optimizing its BBM app for Android users on the Gingerbread version of the mobile operating system – more specifically version 2.3.3+.

While we knew the company was testing the app for Gingerbread, in a blog post today Jeff Gadway, head of product and brand marketing for BBM, said that the company is now “moving into an external beta” phase ahead of the proper launch in February. For now, BBM will continue to officially support Android 4.0 and up.

Believe it or not, Gingerbread still represents around a fifth  of the total Android platform, so this move should go down well among the BBM masses.