“How do you make lightning strike four times?” That’s the question that I asked filmmaker Sally Nellson/Barrett on day 1 of Big Omaha. I had the pleasure of meeting Sally at last year’s event, and she walked up and hugged me like an old friend. It’s still the most important conference you’ve never attended, and my hopes were beyond high. Was the 4th year of the conference a success? First, you need to know what Big Omaha is, so I’ll usher you to some of Sally’s work for the explanation:

Conferences surrounding technology exist for many reasons. There are trade shows, startup competitions, thought-leader gatherings and others. Big Omaha isn’t any of these. The conference has made a name for itself by bringing people to the stage that you can relate to, while they’re telling stories about how they (or people that they know) are simply going through life.

You’ll notice that I didn’t say that they want to change the world. Some of them do, but not all of them. Some of them even have, or they’re well on their way.

Donors Choose CEO Charles Best told us why he started the organization and relayed stories about the millions that have been impacted already. Yael Cohen of F Cancer brought many to tears, and then to roars of laughter as she talked of her personal struggles with life’s greatest thief. Square’s Jim McKelvey? He taught us how glassblowing is the same today as it was hundreds of years ago, and how a hollow pipe was considered disruptive technology.

This isn’t your ordinary technology conference.

But organizers Dustin Davidson and Jeff Slobotski wouldn’t have it any other way. Their idea is to gather people together who believe (or want to believe) that you can change things; that you “can push things forward” and you can do so from the flyover states. Because if you can make something magical happen in Omaha Nebraska, then you can do it anywhere.

Last year at the event, I found myself attempting to take notes on the talks and then I’d snap out of my daze to find that I had been so engrossed in what the speaker was saying that I hadn’t written a word. From the heart-wrenching personal story of Shervin Pishevar to the talk from Graphicly’s Micah Baldwin which quite literally changed the trajectory of my life, I was completely overwhelmed.

This year, for me, the conference held something different. The speakers were a bit less “famous” than in years past, but certainly no less dynamic. They were a well-vetted list of some incredible minds. But what changed was a definite influence in what Silicon Prairie News (SPN is the company and publication behind Big Omaha) had accomplished in the year since I’d last visited the city. 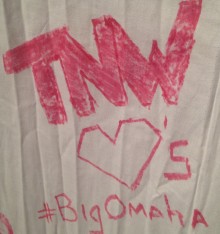 In the short span of 365 days, the Silicon Prairie has had some major happenings. SPN as an organization has started another conference, Thinc Iowa, and the energy of Iowa’s people is palpable. Where last year a few might have been milling around, this year they were out in force and ready to show the world what they were doing.

There has been a major, important funding round for one of the Prairie’s companies, as Dwolla closed $5 million from a-list investors including Iowa native Ashton Kutcher. SkyVu Entertainment‘s breakout hit BattleBears has been making huge moves in the gaming market and fashion icon Marc Ecko has seen so much promise from the area that he returned this year as an attendee, rather than a speaker.

There’s something big going on in the Prairie.

But that something big has perhaps more to do with the mentality of those who would attend, than simply a great lineup of speakers. mqVibe‘s Jeremy Tanner said it best:

My last night in Omaha was spent having a two-hour dinner with organizer Jeff Slobotski. We talked about the roots of the conference, how it is today and where he sees it going in the future. The Cliff’s Notes version? Big Omaha will resist change, because you don’t mess with perfection. Those are my words, not his. Slobotski is far too humble to ever say something like that.

As for the events surrounding the Prairie? Thinc Iowa’s planning is well underway, and Slobotski tells me that there are other ideas in mind for ways to bring the three main hubs of the midwest together more often. Omaha isn’t trying to be the next anything, least of all the next Silicon Valley. But the very fact that it’s the antithesis of the Valley is part of what makes Omaha so incredibly special.

If you missed out this year, you’ll be able to catch the videos as SPN puts them online over the coming weeks. But mark your calendars for early May of 2013. It wil be year #5 of Big Omaha, and you owe it to yourself to find out why many of us will be back again, no matter what it takes.