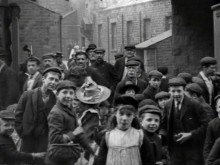 The British Film Institute (BFI) has announced that it will launch an on-demand streaming service called BFI Player on October 9.

The BFI Player, revealed today, will focus on delivering independent and specialised films, and will launch with more than 1,000 films – about 60 percent of which will be free, while the remainder will be available on a pay-per-view basis.

The launch has been timed to coincide with the BFI London Film Festival and will include seven ‘collections’ (channels) from day one, which include a behind the scenes look at the Festival, Gothic and Cult cinema and even 28 hours of rare Edwardian film footage from film makers Mitchell and Kenyon (whose work is pictured on the right), among others.