This article was published on January 1, 2012

Oxygen Accelerator is the UK’s latest mentoring programme on the block, and we reported on the 9 new startups to emerge from the 13-week programme back in early December.

One of the startups there was Bertie and Bean, which we described in our synopsis at the time as thus:

“Bertie & Bean is The Children’s Clothing Exchange. It’s a Web-based and mobile platform that enables parents to easily swap clothes that their children have outgrown.”

It follows a peer-to-peer ‘upcycling’ model that is built on the notion that young children grow very quickly, requiring new outfits every 3-6 months, which obviously can be very expensive. With Bertie and Bean, you pay ‘per bag’ of clothes, which is a flat fee of £15.

Company co-founder James Tabor pitched to investors at the Oxygen Accelerator event near London Bridge a month ago, and outlined where they were coming from with Bertie and Bean, and where they hope to go.

“We decided to focus on something that was common to all nought to four-year-olds”, says James. “They grow like wildfire. They grow so fast, that on average, they’re out of their clothes every 3-6 months.”

If you’re wondering how this translates into hard cash, James was on hand with the relevant facts. “The average UK family spends £700 per year, per child, clothing their kids”, says James. “This is important, because there are 3.86 million 0-4-year-olds in the UK. This means that £1.54bn is spent each year on kids’ clothes.”

It transpires that Bertie and Bean aims to help parents take that £700 a year figure down to around £500 a year. Sounds great, 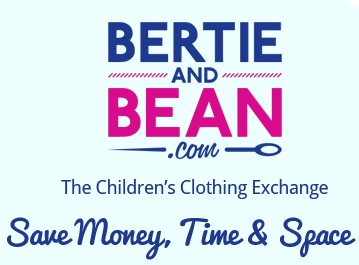 but surely this is already being done and there have been plenty of alternative options available for years? “We’re not going to lie to you”, says James. “There are alternatives out there. If you happen to have friends and families nearby with kids around the right age, you can call them up and say: ‘has Dan grown out of that coat yet?’, because Jake will fit it now. Or, you could get a little more 21st century with eBay and Gumtree. But you might get lost in the noise. Or you might be a member of the National Child Birth Trust (NCT), and take part in one of their biannual nearly-new sales.”

So…is there anyone doing this at the moment? “In the UK we’re unique”, says James. “In Europe, we’re also unique. Nobody else has come up with a logistics service which is as tailored as ours, or as targeted and as niche as ours.”

“In the USA, however, there is a company called Thredup, which has had amazing success”, adds James. “Launching last year, they now have over 250,000 users participating in a thousand swaps a day. They recently raised a category B funding round for $7m, which was led by one of eBay’s Co-Founder.”

So Bertie and Bean wants to offer an affordable, dedicated online platform for trading children’s clothes. “We wanted to design a service that was free for people to send on items”, says James. “Where you don’t have to go to the Post Office, buy a bag, queue with it, weigh it and worry about all the postage fees. We don’t want people worry about auctions either – we want a democratized, flat-rate service, delivered straight to your door. We want it to be as easy as possible. As an added bonus, we wanted to do something that gives back to charity too.”

How did James come up with the idea for Bertie and Bean?

“I had broken my leg badly this time last year and was faced with 6 weeks off work. My twin sister was pregnant at the time and I was playing with new business ideas. This young couple posed an interesting problem – they were going to go from having plenty of disposable income, regular holidays etc. to having a child who would turn everything on its head. After playing with business models for a while, Bertie and Bean was born! There have been some refinements but the core of the idea remains essentially the same – young families can send on clothes their children have outgrown and take on clothes from other families that will now fit their child.”

Provisionally penciled in for a March 2012 launch, Bertie and Bean strives to connect a national network of like-minded families. “Users can create a short profile, log-on, give their details and then we post them 2 environmentally friendly plastic bags”, says James. “The user can then go through their children’s wardrobe, pull out what they’ve outgrown, and they then create a short-listing which describes the items, and they can even upload images.”

They can then go into the system and pick a bag of clothes that will fit their child, they pay a flat-rate fee. The sender is notified, they drop it off at the Post Office, and a couple of days later they have a new bag of clothes.”

So, imagine there are two families: The Smiths and the Joneses. They are each sent a welcome pack, with these two environmentally friendly bags. They dig out a bunch of clothes, create a listing and then decide they want a bag of clothes themselves, to replace the ones their children have outgrown.

In this instance, the Joneses would pay a £15 flat-fee, and the Smiths send them a bag of clothes. And vice versa, if the Smiths happened to want a bunch of clothes from the Joneses. It’s important to note here that the family sending the clothes isn’t selling them. The money covers the logistics, courier costs, charity (£1 from every £15 bag) and, of course, Bertie & Bean take its cut. It’s all about supporting the ecosystem – you pay £15 for two bags of baby/kids’ clothes, and send them on when you no longer need them. And remember – to send, you pay nothing.

As with any venture such as this, quality and trust are paramount to its success. “We are asking parents to help each other”, says James. “Our research has hit upon a key point. There will be a rating service, so when an exchange is complete, feedback can be left.”

Their research found that parents were concerned that they may be sent ripped or stained clothes, when it has been described as in perfect condition. Whilst there will be systems in place to help mediate such circumstances, ultimately there will be a heavy reliance on this trust network of families wanting to help each other.

The future for Bertie and Bean

The founders went into Oxygen Accelerator looking for £200,000 to help build its Web application…have they secured it yet? “Our book is currently open and we expect to complete a round in the early part of 2012″, says James. With Bertie and Bean not even launched yet, it may seem a bit wrong to look too far into the future. But let’s do that anyway.

“We arrived at the accelerator with a nice idea on an otherwise blank sheet of paper”, says James. “We had some wonderful help from the mentors who asked us to go out and interrogate the market, and see if we could prove it would work. We started engaging with local focus groups, talked with nursery managers and parents, and engaged the online community, talking with bloggers.”

They’re currently in talks with Gurgle, which is the online magazine/portal for retailer Mothercare. They are also in talks with the National Childcare Trust (NCT) about helping them monetize the clothes that are left behind at the end of their nearly-new sales. “Both these conversations are going well”, says James.

At the time of writing, the platform is about ¾ built. “The aim is to have the full, finished product finished and tested by mid-January”, says James, before confirming that they’re hoping for a March launch. And 12 months from now…where can we expect to see Bertie and Bean? “Nine months old and growing fast – users and verticals”, says James. “Bertie and Bean will be celebrating Christmas by gearing up for our first January marketing push, which we believe will be a key time to promote the service.”