Berlin was once a political hotbed that divided a capitalist West and a communist East, but that stamp’s getting old. Berliners have long moved on to newer things – turning the city into an international startup hotbed, for example. The German capital now attracts creatives from all over the world, looking for their chance to break through.

For this second in a series of awesome tech company offices, here’s a look at some of Berlin’s finest, starting with Gidsy and finishing with… Well, that would be spoiling things wouldn’t it? Don’t forget to check out our look at Amsterdam startup offices, too. 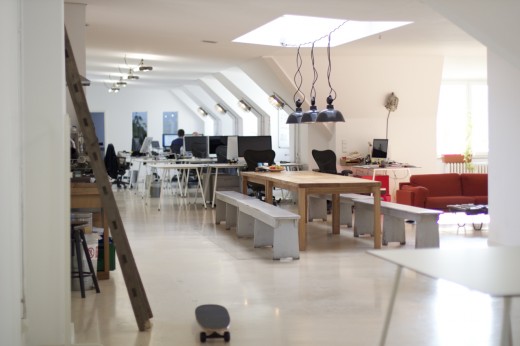 Gidsy’s Dutch and Austrian founders originally came to Berlin to run a design studio, but they quickly grew distracted by a side project: a community marketplace for authentic experiences. Gidsy as we know it was born. Things took off quickly: January 2012 saw an investment boost, with actor Ashton Kutcher stepping in as an investor, and it looks like becoming a solid name for people looking to book an activity during their trip. The team recently opened their office in Kreuzberg, a predominantly Turkish neighborhood with a vibrant arts and counter-culture scene. 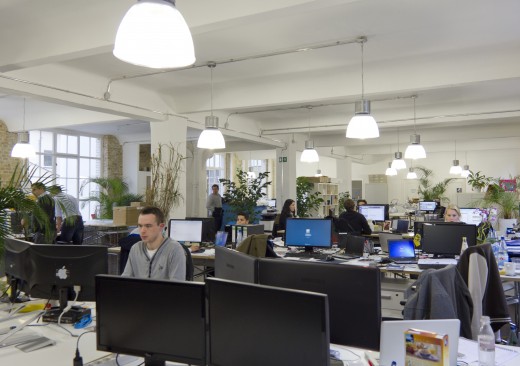 Few believed in Madvertise’s plans for mobile advertising, but the tables quickly turned when Google acquired AdMob, a similar company, for $750 million. Like many Berlin startups, Madvertise works in an early 20th century industrial-building-turned-office. It’s a tightly packed space, with a tech department that feels like a quiet haven in the storm. But looks deceive: team members here have a habit of attacking each other with toy guns and helicopters, probably making it the rowdiest part of the office. 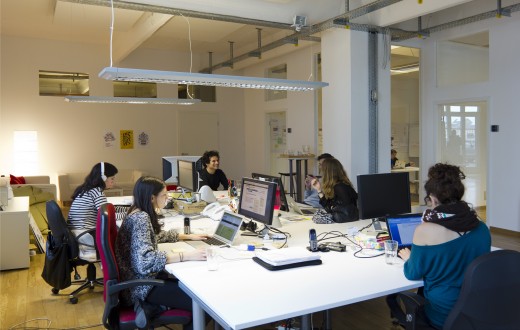 Australian-founded online marketplace for graphic design, 99designs entered the European market by acquiring German counterpart 12designer in August 2012. Continuing both brand names, they now share a former industrial building by the waterside with an array of other startups. We saw some of their creative attitude reflected in how the team (solely a female affair at the moment) uses its space: the conference table doubles as a ping pong arena. 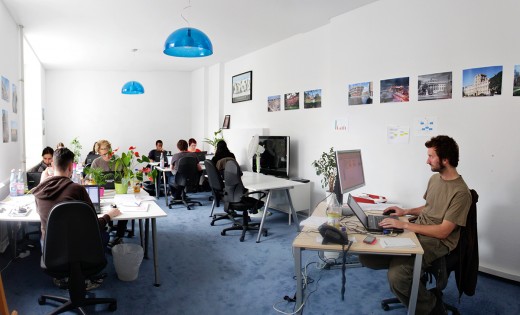 There’s a social media platform for just about every conceivable niche, but scientists and researchers are still confined to a university’s internal network. Or are they? Virologists Dr. Ijad Madisch and Sören Hofmayer, and computer scientist Horst Fickenscher decided to fill the gap with ResearchGate, a platform that facilitates collaboration between researchers and scientists. Staying true to their roots, perhaps coincidentally, their office is right around the corner from the Museum für Naturkunde (which translates into ‘Physics Museum’, but covers just about everything related to science). 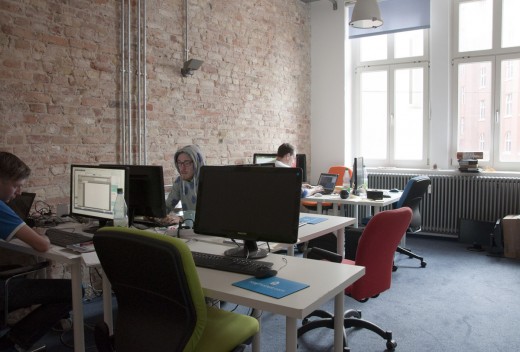 Veodin is the result of Jan Mechtel’s and Matthias Mayrock’s desire to create innovative productivity software. Their core product is KeyRocket, a tool that offers users an easier way to quickly learn keyboard shortcuts. The company’s located in BACKFABRIK, a former industrial bakery that today houses more than 40 companies. 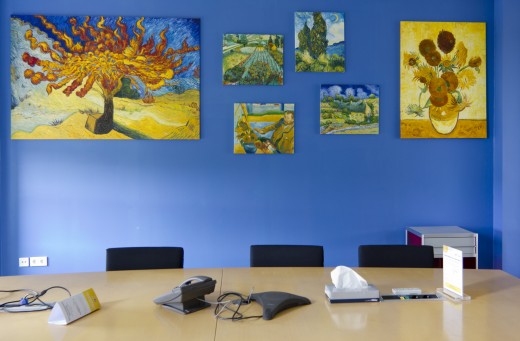 Okay, so it’s not a startup, but it definitely deserves mention. You can find eBay’s German campus (too big to be called an office) at one of the only places where you can still see parts of the Berlin Wall standing. Employees designed their conference rooms and workspaces into themed floors, using items they bought on eBay. For example, the human resources floor is all about famous artists.

Rooms here carry names like ‘Shakespeare’, ‘Van Gogh’, or ‘Kraftwerk’. With a gym on site that will soon allow relatives to join in on work-outs, you could easily mistake this place for a little indoor town. 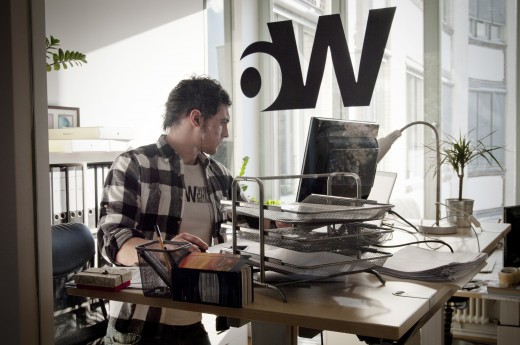 As the name implies (‘Wunderkinder’ means ‘prodigy children’ in German), 6Wunderkinder was founded by six friends in Berlin. They design and develop cloud-based, platform-independent productivity applications, like the the task management tool Wunderlist. Team members here get to mount ergonomic and comfortable chairs, work behind height-adjustable desks and hit the keys of brand-new MacBook Airs. The company lives ‘work hard, play hard’, doing the latter in a hangout lounge that’s fitted with an Xbox and a ping pong table. 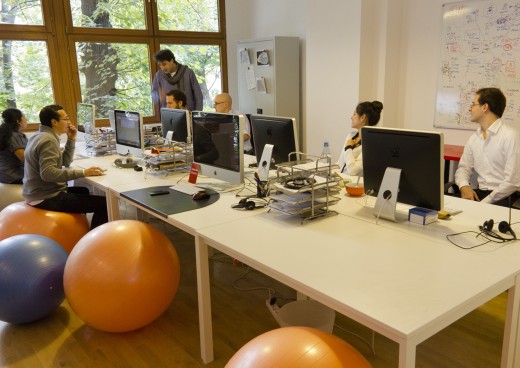 Architect Giulio Sovran, who helps Italian expats get settled in Switzerland, and Andrea Santini, a recruitment entrepreneur, noticed a gap: they saw lots of companies that had a hard time finding the right people in their own country, and lots of job seekers who were moving abroad to find work. So they created Expaway, a recruitment tool that matches expats to prospective employers.

Launched in April 2012, Expaway already counts a full-fledged team. This Berlin crowd bounces on exercise balls in one of Frei Otto’s ‘eco-houses’, the architect who also drew up Munich’s Olympic Stadium and Saudi Arabia’s Tuwaiq Palace. 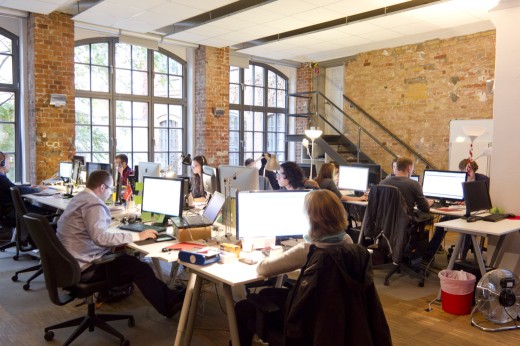 We’re being overloaded with ads; so true that it’s close to a fact. Companies know this of course, so value-exchange platform SponsorPay wants to engage consumers by providing them with value. For example, by offering them exclusive premium content after watching a video ad or after signing up for a newsletter.

Its team works in – yep, that’s right – an old factory that previously housed MTV and German director Wim Wenders. SponsorPay started out with a single space here, but it quickly took over most of the building. Which makes us wonder how long it’ll be before we can schedule a visit to its new office. 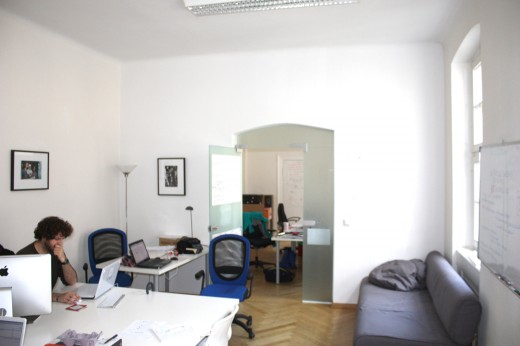 Probably the first startup ‘garage’ in the list, Roomsurfer is Germany’s answer to Airbnb and Couchsurfing. Created in 2012, Roomsurfer allows travelers and hosts to connect, using their Facebook interests to create the right match. Operating from a cosy office in a downtown Berlin apartment, a building they share with another company, they’re just a short walk away from the famous Alexanderplatz.

It’s an international team, which makes sense for a company in the travel business. But Roomsurfer takes it to the next level: the number of languages spoken at the office exceeds the number of team members. 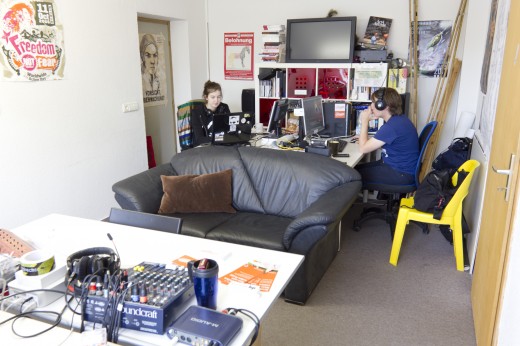 If you think open source is only for techy geeks, this company may help you think again. From the fifth floor of a former textile factory, Newthinking works to extend the collaborative open source mindset beyond the tech and hacker scenes. Newthinking organizes events that unite people from different branches in creating cool new things. One example is ‘re:publica’, a global digital society summit. And true to the open source philosophy, one of their employee benefits is a company desktop crammed with open source software. 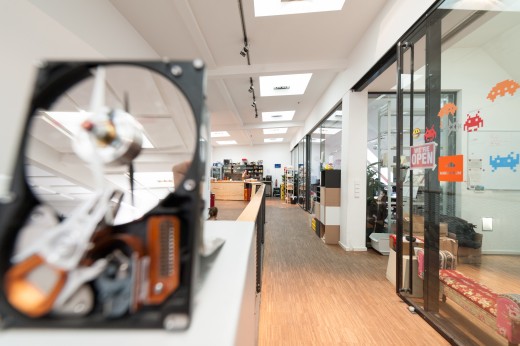 Together with eBay and Gidsy, SoundCloud is probably the most well-know name on this list, but for those who don’t know: SoundCloud allows users to easily create and share any kind of sound across the interwebs.

Started in Sweden, founders Alex Ljung and Eric Wahlforss moved their company to Berlin in 2007. The office in Mitte (one of three SoundCloud offices in Berlin) was built in the beginning of the 20th century. Before the the Wall came down it housed the DEWAG, the only legal advertising company in East Germany. SoundCloud now uses it to serve its more than 20 millions registered users worldwide – and to maximize their office life with rituals like weekly cooking contests and weekly yoga classes. Developers get hacker-time to work on personal projects, and there are of course the Friday afternoon drinks, also known as beer o’clock. Or gin o’clock. Or Martini o’clock.

Next month we’ll be in the land of Guinness, leprechauns and St Patrick’s Day. But we’re not going to talk about stereotypes, we’re going to show some offices and your tips are appreciated! Which startups would you like to see featured? In Dublin or somewhere else? Feel free to leave your ideas in the comments!

All photos are published under a Creative Commons licence.