A few weeks ago I ordered a pizza from Domino’s and saw a special for the company’s new side item, Parmasean Bread Bites. I took the bait and quite liked them, but this isn’t about a side item at a pizza delivery place, this is actually a story about how that side item came to be. It was an idea from a Domino’s franchise owner named Brian Edler. But Domino’s is no stranger to the gathering of ideas and information, and the Parmasean Bread Bites are really just an extension of the company’s central values, which brought about a project called Domino’s Think Oven.

Flash back a few months ago and Domino’s was fighting off some complaints. The company had some upset customers over a few different, very public issues, and it was doing damage control. But instead of simply apologizing, Domino’s opened the floodgates and began asking for people to give not only the problems that they had, but also ideas about how to make things better.

That spawned another question – how do you take this influx of ideas and capitalize upon them? From there, the Think Oven campaign was born.

Think Oven is a Facebook page. But instead of just being a typical Facebook page, it’s a conglomeration of tools that Domino’s uses in order to gather submissions for its Projects and Ideas sections. Projects is something directly from Domino’s, where the company looks to gather submissions related to a specific point, such as new uniforms or how to improve a certain factor. But the company is also using an Ideas section, where customers can submit their own thoughts about what the company should be doing.

To get help making this all come together, Domino’s contracted Crispin Porter + Bogusky, an advertising and marketing powerhouse based out of Boulder, Colorado. CP+B knew how to make everything look great and come across in the right manner, but it turned to another Boulder company, Napkin Labs, to get the tools that would let them gather the data.

According to stats from CP+B’s David Whitney, Think Oven has generated over 3,500 ideas for Domino’s thus far, after launching in February of this year. For the Projects section about uniforms, over 650 submissions were given. But it’s not a one-way street. Domino’s gave the two best ideas $500 prizes.

Associate Creative Director Matt Talbot tells me that what’s probably most surprising is not necessarily how good the ideas are, but rather that the suggestions are helping Domino’s to do QA as well. For instance, any time that you order Domino’s from a hotel, you’re supposed to have napkins and utensils included, but time and again, the idea came in to get napkins and utensils, which helped Domino’s spot a problem in the quality of its delivery service that it might not have known about otherwise.

For the most recent phase of Think Oven, in which submissions are being accepted in how to improve the company’s online ordering process, Domino’s realized that it needed to change things somewhat. With so many great submissions, it seemed a bit constraining to only have two prizes. This time around, 8 different winners will get $250 each. 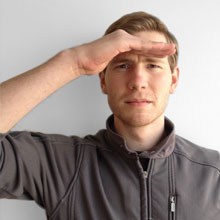 While the campaign is cool, what’s really exciting to me is the technology behind it. For that, we have to go back to Napkin Labs. CEO Riley Gibson sums up Napkin Labs like this:

“We provide a suite of Facebook apps for brands to turn their pages into a hub of crowdsourcing. To do that, we had to ask how we push beyond sweepstakes, coupons and the like to really be an epicenter for brands to collaborate with customers.”

For Domino’s, the Brainstorm app, combined with Pipeline and Superfans is what has made it a success. Gipson tells me that the company is mapping out its next apps, and its using its own Brainstorm app to uncover what apps its customers would like to see.

But Gibson is quick to point out that you don’t have to be Domino’s Pizza or CP+B to use Napkin Labs’ services:

“We can help any business get that information from their customers and a company can run their own product with Napkin Labs. It’s really not hard to decipher the data that we’re collecting”

In fact, Napkin Labs has learned a bit about itself, as well, by working with Domino’s:

“It’s helped us to understand how we can use data with other companies moving forward. Facebook campaigns aren’t about gathering fans; it’s about learning and action. That growth is important, but the real magic in social media is when you can blend growth with engagement to come up with a campaign that’s worth sharing.”

For Domino’s, Crispin Porter and Napkin Labs, Think Oven has indeed been a campaign worth sharing. We’ll be keeping our eye on all of these companies as time goes on, because there are valuable lessons to learn when social media gets real.