£23 billion is spent each year on 2 million tons of clothing in the UK, 50% of which winds up in a landfill. According to Stefan Siegel, the founder of the London-based fashion startup Not Just a Label, clothes bought on the high street are worn an average of only 4 times before being thrown away.

For those outside of the U.S., “high street” is the equivalent of main street, a metonym for the common name of the primary business street in towns and cities. This is the street you’ll find popular retailers and clothing shops like H&M, Top Shop and Forever 21.

High street has a lot of power in the fashion world as more and more people shop cheaply to completely reinvent their wardrobes season after season. But this is a very dangerous cycle — one that has economic, environmental and cultural impacts.

In London, and the world over, there is no lack of fashion startups aiming to reinvent the model, but many come and go with the seasons. Siegel launched Not Just a Label (NJAL) in 2008 as a networking platform for fashion designers. In the past four years, he’s concentrated on developing a style of “authentic luxury” with talented designers who use top quality materials, sustainable practices and eco-friendly processes. The idea being that if you buy something that’s beautifully crafted, you’ll keep that piece for longer. The site now represents over 9,000 fashion designers from around the world who create a total of 50,000 design objects a season.

The 33-year old entrepreneur was born in Meran in South Tyrol in Northern Italy, a region synonymous with artisan craftsmanship and high fashion. After studying economics, business, and working alongside local fashion design houses and media agencies on five continents, he graduated with an MA in International Economics. Before he started working for companies such as Ernst & Young and Sal. Oppenheim in Switzerland, and the Merrill Lynch M&A Investment Banking group in London, he appeared in campaigns and catwalk shows for Prada, Gucci, BMW, K-Swiss and Calvin Klein.

He left all this behind to start NJAL at his kitchen table in East London and bootstrapped it with his brother until it became cash positive in its second year. The now 15-person team monetizes through advertising and commissions earned via the online store, sales from which have doubled each year.

In the past year, Stefan has worked closely with the European Union and Tech City to promote the entrepreneurial community. In March, NJAL traveled to India with a grant from the British Council to develop business relationships in the country, specifically in the creative sector. Siegel spent seven days meeting the country’s finest artists, creatives and key leaders, as well as visiting the three renowned fashion design schools and traveling to four cities — Mumbai, Delhi, Ahmedabad and Goa.

“India is a very inward market– and not just for fashion,” says Stefan. “McDonald’s, which was trying to sell hamburgers to a country that’s 50% vegetarian, unsurprisingly almost closed down there until they started offering the McAlooTikki. MTV came in with Euro and American crap music and didn’t succeed until they changed their programming to offer Indian reality shows.” 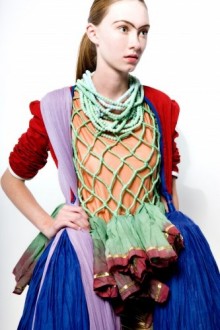 On his trip to India, Siegel met with his existing designers and signed up 50 new ones. In thinking about how he could help create a uniquely Indian product and sell it to the world, he worked with designer Karishma Shahani to produce designs beyond the traditional sari. The designer’s beautiful prints, exquisite cuts and hand-dyed fabrics are now on sale at Not Just a Label (pictured right).

Not only does Stefan help his designers with business tactics like ecommerce, contracts, pricing models and PR but he helps put them in touch with talented artisans and old school Italian producers.

Why is this so important? In the Veneto region of Italy where 44% of all European high end fashion production comes from, they’re losing one traditional artisan technique a week. Whether it’s a certain kind of saddle stitch or manufacturing process, the industry is weakening and high street brands accelerate this fate as well as contribute to retail’s homogenization

“NJAL is about giving each other access in an industry that hasn’t continued to work together,” he says. “In the future, we want to create physical spaces in London, Paris and NYC so we can showcase what these creative designers are capable of.”

If you’ve kept up with the “slow food movement” NJAL is fighting a similar battle — but for fashion. As we become more aware of the processes behind the products and experiences we have, the more educated amongst us will choose higher quality over higher quantity; we’ll choose boutique over canned; and long-lasting over one time use.

One of the best examples of this trend can be seen in the NJAL Malaysian designer WEAREULTRA, who produces one collection per year. You can’t buy just one piece, you have to buy all 10 pieces with the understanding that those can be mixed and matched to last you the whole year. At the end of the year, you can turn in the pieces to be upcycled and receive a discount on the next year.

To educate consumers about the costly production process of sustainable clothing, NJAL launched The T-Shirt Project over the summer of 2010. Working with 3 designers, NJAL produced 500 beautifully designed, hand-stitched black and white eco-friendly t-shirts. Adding up each designer’s time, the cost of organic, fair-trade cotton and sustainable production, each t-shirt cost £55 and came with a poetic label that told the shirt’s story. UPS provided free delivery and sustainable packaging for the project. Hoping for press, Stefan reached out to his friends in the editorial world. “But we didn’t get one editorial feature,” Stefan said. “We were told the project was too confrontational for most of their advertisers. That was a wake up call on how wrong the industry is at a very high-level.”

“This past year has been really character building,” Stefan explains. “We had received notable inbound interest from financial backers. This winter, when I was speaking to VCs in London and New York, I literally had my head against the wall explaining our business model and why we don’t want to scale the company to an infinite proportion… you can’t just scale this kind of curation.

During that time, I saw 50 fashion startups all approaching the same problems. And 80% of them had VC backing. Since this January, nearly 1/5 of them have folded. This proves, you cant just open an online store and say, ‘Hey were going to do this now!’ without credibility or a special story.”

Backing Not Just a Label, you’ll find an army of designers, the UK and European governments, as well as traditional businesses like Valentino, Chanel and the Marzotto Group, a 175-year old textile producer. “But it’s still tough. We’re against the wind the whole time,” says Stefan.

While VCs in New York City have poured millions of dollars into light-hearted fashion apps, Siegel and his 15-person team at NJAL are busy building a business that aims to shift an entire industry and reintroduce pillars of authenticity, creativity and sustainability.

“When will we be able to build up real businesses again and get something done? Because most of these startups make money on the backs of other people’s business models,” Stefan says with concern.

I’m so happy we said, ‘I’m sticking to our business plan and that’s it’. It’s a cultural experiment — in order to give young designers an opportunity to revive artisanship around the world. We’re slowing down the process, slowing down fashion, increasing the value and revolutionizing how retail works.”