This article was published on December 18, 2014

In 2010, after AOL acquired Bebo but struggled to do anything with it against formidable rival Facebook, the company shut the social network’s doors.

The original founder of Bebo has since purchased it back from AOL and have reimagined the social network as a new mobile app to message friends.

The new Bebo, which quietly launched this week, is a considerable shift from what it used to be. It’s now a messaging app, but not just any old messaging app. I used Bebo heavily back in highschool (it was extremely popular in Australia and New Zealand) and the new app is a fun throwback to my lost years on the social network. 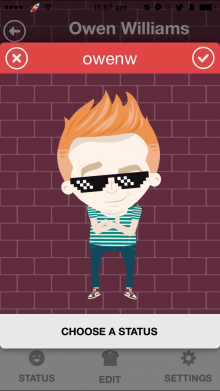 Bebo’s messaging app mashes up hashtags, messaging and avatars to create a bizarre stepchild of all three that actually works quite nicely. The very first thing you do is set up your avatar to your liking; no profile pictures here, just avatars.

Once you’ve got a nice likeness of yourself, you’re thrown straight into the new mashup world that is Bebo. Conversations and hashtags are integrated together and do all sorts of unexpected things.

I don’t know many folks on Bebo just yet, but luckily you’re able to send test messages to the team behind the app. When you send a hashtag in a message, the company puts your avatar into the situation you just sent.

For example, a simple #allthesingleladies puts my avatar in the classic Beyonce dance move and #twerk puts my poor avatar in Miley Cyrus’ now-infamous dance move.

But hashtags do far more than you expect, writing #draw opens a canvas where you can draw an image to send to a friend or #tictactoe brings up a game.

The rest of Bebo’s new app is fairly basic, for now. You can send or receive a ton of unique hashtags, get a list of what’s trending by typing #trending or set your status using a hashtag as well as, you know, messaging your friends. 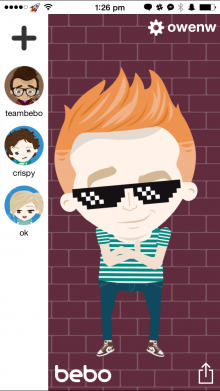 It’s not clear if Bebo wants to take on big messaging players like Line or Whatsapp, but the hashtag mechanism the company has latched onto is addictive, unique and fun. I haven’t had so much stupid fun with a messaging app since stickers came to Facebook Messenger.

But Bebo faces a problem. With the plethora of messaging apps now available and my friends fairly well entrenched in the ones they use, why would they switch to this messaging app?

The spin of avatars and hashtags are cool, but I don’t think it’s enough to make someone want to make the jump from Line or WhatsApp. Two years ago, it might have been perfect, but now Bebo feels late.

The company said that in the first six hours after launch, it saw 500,000 messages sent on the network and that it was trending in the UK overnight.

Bebo is back. Will it stick with consumers the second time around? We’ll have to wait and see.