This article was published on November 11, 2008

I’m touring around China with bloggers. I hope to give you as many updates as possible about this land of endless opportunities. Thanks to Spil Games for sponsoring me.

After breaking with their “do no evil” principle, Google is running smoothly in China. But this wasn’t always the case. Here’s an interesting blast from the past.

There’s a story about Google which functions as a fun icebreaker when discussing censorship in China. It certainly caused some laughs here and there during lunch yesterday. Back in 2002, the Chinese government blocked Google in a rather original way. Instead of using, say – just a black page, the government linked to a search engine that did have their blessing. 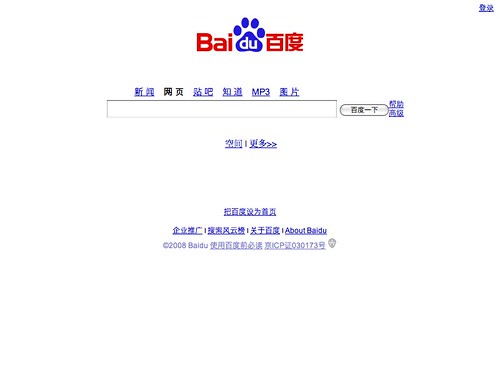 That’s right, if you typed in google.com six years ago, you’d be redirected to Baidu. This is China’s largest search engine, better known as “the Google of China”. A few years ago, you could take this literally. Baidu indexed 740 million web pages, 80 million images, and 10 million multimedia files. The domain baidu.com attracted at least 5.5 million visitors annually by 2008 according to a Compete.com study.

When we, the China 2.0 group, later visited a presentation of upcoming social network Kaixin001 – it turned out that the founders were proud of the high Google usage under their users. Why? Well, it proves their users have a good education, as Google is mainly used by students for English searches. When searching for info in Chinese, Baidu is the better option, author Andrew Lih told us.

He also mentioned that Baidu has a huge marketing machine rolling. When going to a James Bond movie, you can’t miss the message saying Baidu made this movie possible.