Box of Awesome recently launched as a subscription service aimed at kids in the UK and Ireland, sending them a box of music, movies, games, collectibles, books and the like every two months. Now the Dublin-based startup plans to drop some entrepreneurial science on its young recipients, courtesy of everyone’s favorite robotic guru, Fake Grimlock.

Fake Grimlock, the shadowy, trademark-tickling figure whose capslocked advice has garnered a cult following in the startup world, recently launched a Kickstarter campaign for his ‘Book of Awesome’. The book promises to feature both new and classic Fake Grimlock writing, committed to paper for the first time “SO PUNY WORLD NOT FORGET.”

Now Box of Awesome has announced that it plans to match all donations on the Book of Awesome campaign up to $75,000. At the time of writing, the book is already way past its $10,000 goal, having reached $52,188 on Kickstarter. To ensure that children learn about entrepreneurship as early as possible, the book will be sent to all recipients of a future edition of the Box of Awesome. 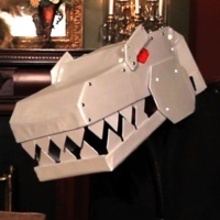 Quite what young people will make of Fake Grimlock’s book remains to be seen, but when I was a child, career advice from a Dinobot (even a fake one) would probably have been far more likely to sink in than anything my teachers could say.

Box of Awesome was launched six weeks ago by serial entrepreneur Dylan Collins, who previously co-founded Demonware before selling it to Activision and is also known for Jolt Online Gaming and Fight My Monster. Collins says that Box of Awesome has got off to a good start, being over-subscribed on the first box and having seen numerous children’s unboxing videos posted to YouTube.

Box of Awesome seems well placed to help brands reach the kids market in a unique way. “I describe what we do as being in the ‘new place’,” says Collins. “It’s the result of two things happening in kids/teens market: 1) too much content (need discovery) and 2) too little physical retail (need physical discovery). We’ve found that a lot of the bigger media companies are actively looking for ways to communicate with this audience but through alternative platforms. We’ve a lot of people coming to us, which is quite flattering and clearly shows we’re on the right track.”

Interestingly, it’s not just traditional children’s brands who are approaching Box of Awesome; Collins says that Web startups see it as a way to break into the youth market too.

Meanwhile, if you want to back Fake Grimlock’s Book of Awesome on Kickstarter, you have 15 days left. Awesome.