This article was published on February 24, 2013

In San Francisco, there are several great places to visit, including the Asian Art Museum. Yesterday, I was invited to check out its latest exhibition, China’s Terracotta Warriors, and test out its new iOS application that it hopes visitors will find enhances their experience.

About the Terracotta Warriors

China’s Terracotta Warriors is all about these ancient Chinese objects from the Qin dynasty (221-206 BCE). It features ten life-size terracotta figures along with 110 rare objects found from underground sites surrounding Qin Shihuang’s, China’s First Emperor, tomb. If you’ve ever traveled to Xian in China and visited the sites, you’ll know that it’s a massive complex and it’s still being excavated. The Asian Art Museum has brought a very small piece of the findings to the US. 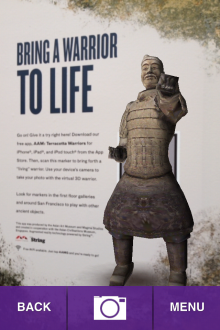 With its augmented reality app, the museum not only offers information about the exhibit, but also a camera feature to display the content. What this means is that throughout the three exhibition rooms, there are six placards that when scanned using the app, will display 3D content and videos onto “real space”.

The museum says that users can view these virtual objects at various angles in real environment, take photos, and share it to Facebook. The app will work for the iPhone, iPad, and iPod touch.

While this is all well and good, there were some quirks when I began my tour. Because of security, all bags are checked and it’s here where the guards instruct you to silence your phone — you are in a museum after all. The downside here is that two of the Terracotta Warriors placards play video, which presumably have sound, but you wouldn’t be able to tell because your phone is supposed to be silent. Of course the video is not stored locally on the device so you cannot play it at your leisure later.

Another small concern is that I found myself with little cell reception in the museum. Granted, I’m sure it was probably just the fact that Verizon didn’t have a strong signal in that area and other carriers were just fine, but with an app that invites users to push photos to Facebook, this could be a bit of a concern. There is, however, free WiFi in the museum, which solves this problem, but I didn’t see any signs mentioning this. 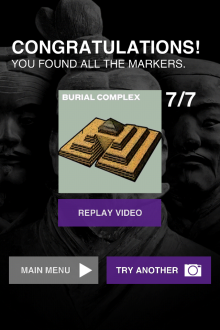 While walking around the museum, visitors will notice that there are six different placards for the exhibition. However, there are actually seven — one is hidden away from view, which I found to be slightly annoying because unless someone had told you where it was, it would never be scanned.

These concerns aside, I found the Terracotta Warriors exhibit to be rather fascinating and worth checking out. If anything, these artifacts and objects are astonishing in their detail and an important part of China’s history and civilization.

It seems that augmented reality is becoming more popular among museums and attractions. The team that built this app for the Asian Art Museum, Magma Studios, has also produced other apps for the Asian Civilisations Museum of Singapore and for the Science Centre Singapore exhibition of Dinosaurs Live!

Last year, the Smithsonian Magazine reported that augmented reality is still making its mark on small screens in the museum world. According to the publication:

Those who run museums know that the people walking around their buildings are already spending an inordinate amount of time using their phones, whether it’s taking pictures or texting friends or taking pictures to text to friends. So it only makes sense to find ways to turn phones into storytelling tools that can bring the inanimate to life. Or shift time. Or add layers of knowledge. More museums are taking the leap and while the results can sometimes still seem a bit gimmicky, it’s a move in the right direction.

Many museums around the world are taking part, including the Royal Ontario Museum in Toronto with its Ultimate Dinosaurs exhibit, the Getty Museum in Los Angeles with its “Life of Art” exhibit, and the Laguna Beach Art Museum in California which is using augmented reality to bring motion to still photos. Additionally, there’s also the iPhone app created by the Science Museum in London that turns “Top Gear” co-host James May into a virtual museum guide.

If you happen to be in San Francisco and have some time, it’s probably worth seeing China’s Terracotta Warriors exhibit. The show runs through May 27, 2013.

Note: While I was given a complementary pass to the exhibition, I was not instructed on what to write about the museum, exhibit, or app. These words are my own.