(Bloomberg) — If your car can hit the brakes in an emergency and check your blind spots, will that make you a worse driver? Increasingly, automakers are worrying it may.

Driver-assist technology that keeps cars in their lanes, maintains a safe distance from other vehicles, warns of unseen traffic and slams the brakes to avoid rear-end crashes are rapidly spreading from luxury cars to everyday Hondas, Nissans and Chevys. But these automated aids aimed at improving safety are having an unintended consequence: They’re degrading driving skills.

“There are lots of concerns about people checking out and we are trying to monitor that now,” said Adrian Lund, president of the Insurance Institute for Highway Safety. “Everything we do that makes the driving task a little easier means that people are going to pay a little bit less attention when they’re driving.” 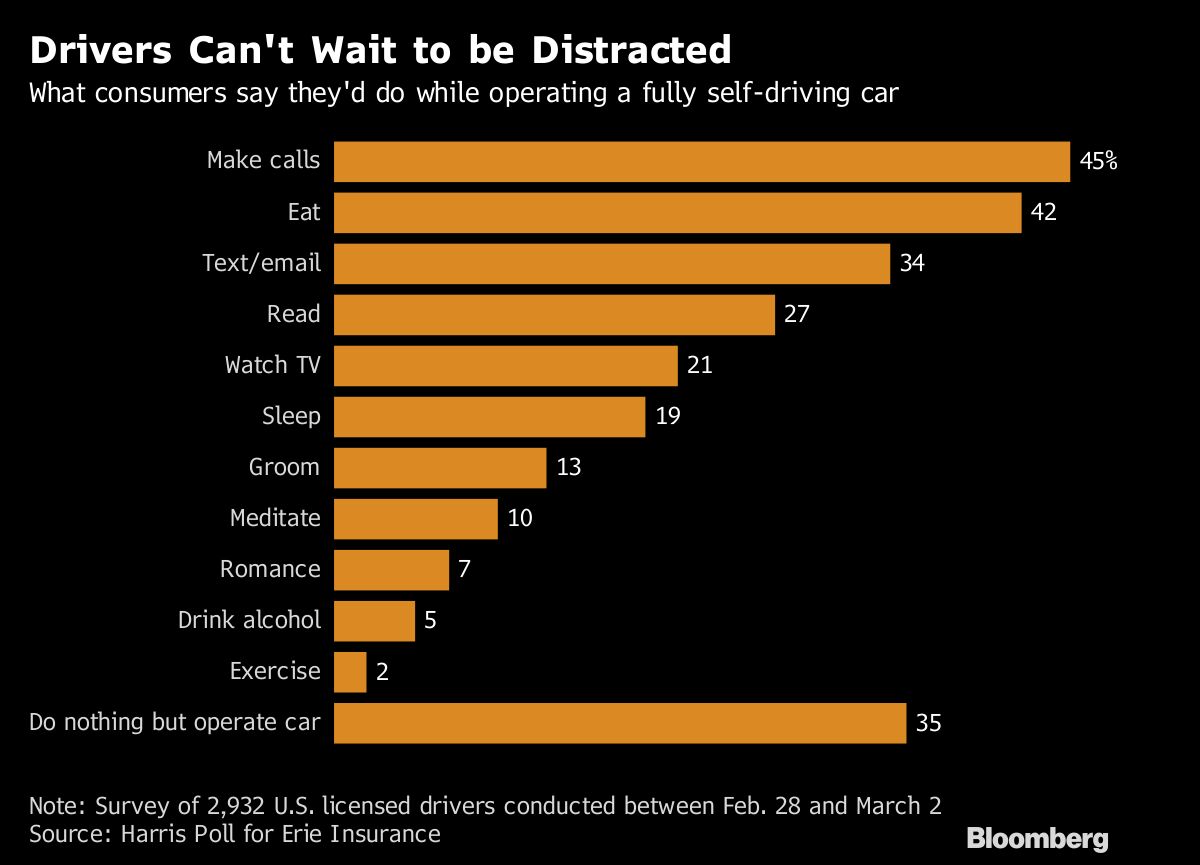 For carmakers trying to address deteriorating driver skills, the stakes are immense. U.S. roadway deaths jumped 14 percent over the last two years, with more than 40,000 people dying in crashes in 2016. While speeding and more congested roadways bear some of the blame, distraction is another key culprit. Data released by the federal government show manipulation of handheld devices while driving, including texting or surfing the web, has been on the rise.

The semi-autonomous features that are the building blocks of tomorrow’s driverless cars were designed to compensate for inattentiveness behind the wheel. Instead, they may be enabling drivers to place too much faith in the new technology.

The auto industry is “terrified” about the unwanted side effects of their popular new features, and companies are scrambling to find ways to keep drivers engaged rather than glued to their smartphones, said Mark Wakefield, managing director and head of the automotive practice at consultant AlixPartners LLP.

General Motors Co. is installing eye-tracking technology on the Super Cruise feature coming to Cadillac models later this year, which allows drivers to take their hands off the wheel but requires watching the road. Nissan Motor Co.’s ProPilot Assist keeps the car centered and brings it to a stop in its lane if the driver goes more than 30 seconds without grabbing the wheel. Tesla Inc. last year implemented limits on drivers’ ability to go hands-free while using the company’s Autopilot system.

“You can be conservative in your design and emphasize safety over convenience to protect the consumer from themselves, which clearly is needed, but the whole industry is not going to do that,” Wakefield said. “So you’ll be right, but you didn’t sell a car.”

Toyota Motor Corp. researchers recognize the new technology is changing the way people drive and has initiated studies with major universities to learn how driving habits might evolve.

“What are the new risky behaviors going to be?” Chuck Gulash, director of Toyota’s Collaborative Safety Research Center, said in an interview. “Is it going to be people testing their vehicles to the limits? Or showing off to their neighbors?”

Consumers recognize the perils of relinquishing control, even if they don’t always heed their own advice. Fifty-seven percent said driver-assist technologies will eventually erode driving skills in an informal survey of 847 visitors to researcher Kelley Blue Book’s car-shopping website, conducted for Bloomberg News in July. 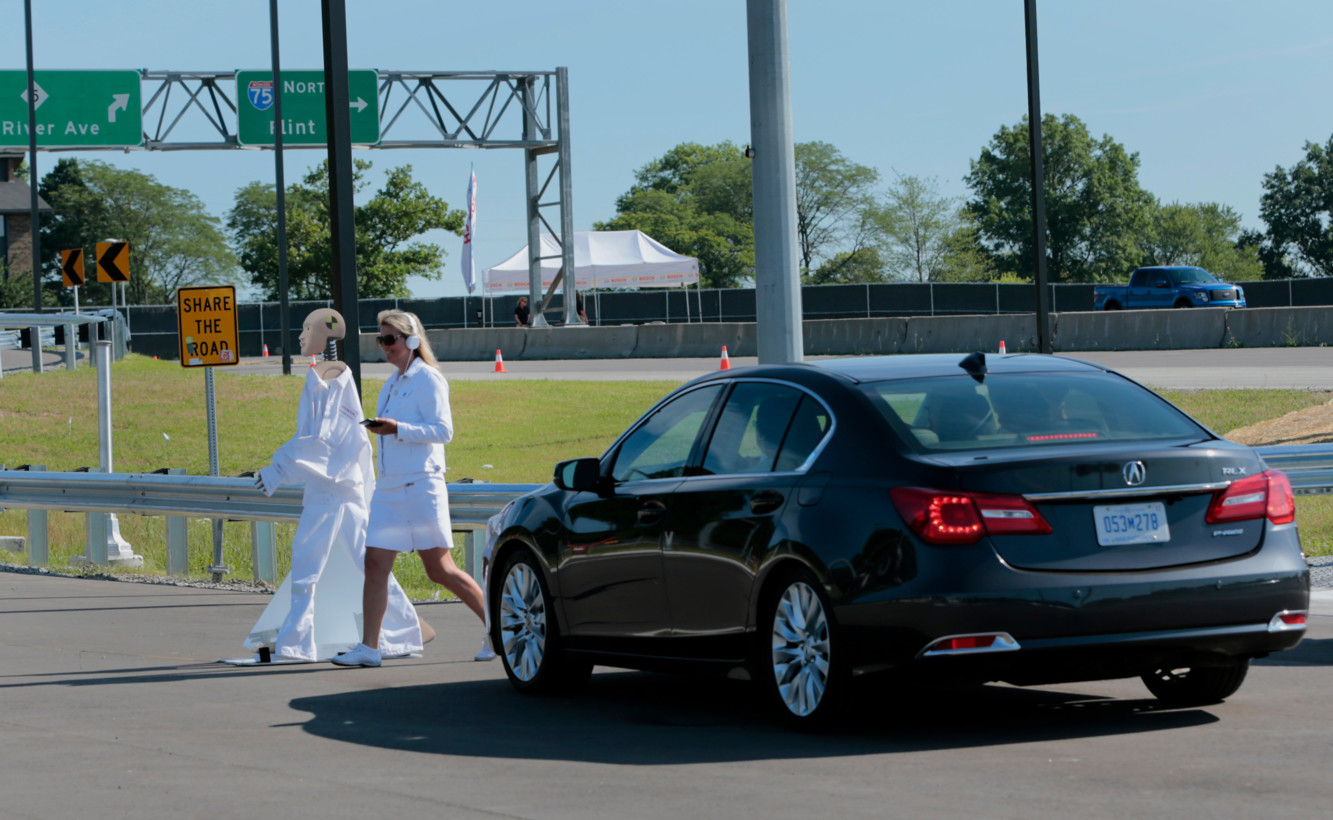 A University of Michigan study showed that may already be the case. The school recently conducted research for an automaker concerned with how people are using blind-spot detection systems that alert drivers with chimes and warning lights when another car is in a difficult-to-see area. The study found a significant increase in drivers failing to look over their shoulder to check for themselves when changing lanes.

Surveys have shown consumers are fond of semi-autonomous features because they take the stress out of stop-and-go traffic and alleviate the monotony of long trips. But the freedom afforded by the new aids has invited abuse by drivers who treat the technology as if it’s fully capable of taking control, with little or no human input necessary. YouTube videos have emerged showing daredevil drivers hopping in the back seat as they trick the technology to believe they have hands on the wheel.

A federal investigation into the fatality last year in a Tesla Model S traveling in semi-autonomous Autopilot mode showed the driver had his hands on the wheel for just 25 seconds in the final 37 minutes before crashing into a semi. Tesla, which was cleared of responsibility by safety regulators, has modified Autopilot to require more driver input.

“At a very basic level, consumers don’t have any idea of how these systems work because they’re all named something different and they all function differently,” said Greg Brannon, director of automotive engineering and industry relations at the American Automobile Association.

Although AAA is urging automakers and regulators to come up with standard terms and parameters for semi-autonomous features, that conflicts with automakers desire to develop and market unique systems and seek an edge over competitors.

Some manufacturers are pushing the boundaries of safety to make their cars appear more advanced, Wakefield said, by fielding systems that allow drivers to keep their hands off the wheel for too long before a chime and dashboard light remind them to take hold again.

“The idea that you can take your hands off the wheel for 15 seconds and the driver is still in control, that’s not realistic,” said Lund, of IIHS. “If they’re taking their hands off for 15 seconds, then they’re doing some other things.”

It’s difficult for drivers to understand what driver-assist systems can and can’t do because automakers sometimes send mixed signals. The seldom-read owner’s manual takes a cautious approach to explaining the aids because corporate lawyers water down wording to avoid exposing automakers to legal liability, AAA’s Brannon said.

Another risk, Lund warns, is that drivers become so accustomed to the aids that they forget when getting into older vehicles or rental cars that aren’t equipped with the technology.

Even if a driver hops into an unfamiliar car that is equipped with a system, performance varies widely by brand. Some adaptive cruise controls, for example, can bring a car to a full stop during low-speed driving, but not at highway speeds.

“So a driver may become accustomed to it working in town, but not realize that above speeds of 50 miles per hour, it’s not going to bring the vehicle to a stop,” Brannon said. “And that could end badly.”