General elections began this morning in Argentina when 28 million registered voters were able to elect a new President and Vice-President, 24 senators, 130 deputies to the lower house of Parliament as well as nine provincial governors. Facing such an important event, Google decided to participate and developed a series of initiatives around the election.

The most visible of these initiatives targeted at Google users in Argentina is today’s doodle on google.com.ar:

However, this drawing is only the emerged part of the iceberg. Indeed, Google recently announced on its local blog that it would dedicate a specific website to the election. When visiting the page google.com.ar/elecciones2011, Argentine users can find resources and links to locate their polling place.

The page also displays the latest trends and real-time news around the seven Presidential candidates. Users interested in researching further can also find out more about local candidates thanks to a partnership between Google and the project YoQuieroSaber, whose ambition is “to enhance the democratic quality of Argentina.” This election is the seventh since Argentina has returned to democracy in 1983.

Google’s dedicated page also leads to a dedicated channel on its video platform, YouTube, which hosts interviews and other news reports on the election, in partnership with the Spanish press agency EFE. 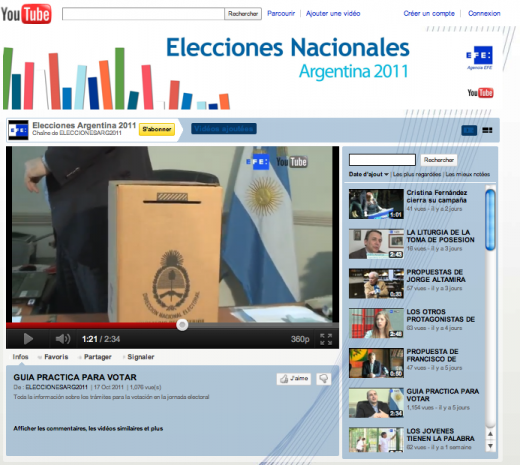 It’s not the first time Google has created  websites dedicated to an election (see our previous post ‘Google rolls out new mobile site for US midterm elections‘) though it’s a premiere in Argentina. It also seems to come at a good time, as participation has been a concern in an election where analysts expect the President Cristina Kirchner to be reelected.

What do you think of Google’s initiatives around elections?