The new #Homescreen app for iOS is a fun way to share, well, your iPhone’s homescreen on Twitter. Now the whole world knows that you care enough about Snapchat to keep it front and center. Now, thanks to the power of data collection, we can see just which apps are the favorites of TNW readers. 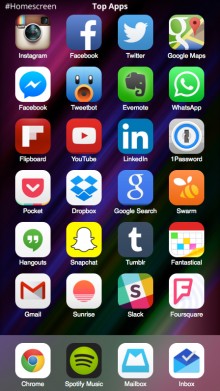 The #Homescreen developers posted the top apps shared by TNW readers this week. In addition to sharing the top apps in descending order, the dock portion of the line up is based solely on apps that inhabit that space on our readers’ homescreens.

Unsurprisingly, Instagram and Facebook come in at spot one and two respectively. Twitter rounds out the top three with Google Maps taking fourth place. It’s good to know that our readers are concerned about security with 1Password hitting the 12 spot and it’s interesting to see that Swarm has beat out Foursquare at spots 16 and 24 respectively.

The Dock yielded some surprises with the Chrome browser popping up on 15.97 percent of TNW reader’s dock. Music service Spotify and email client Mailbox both make appearances, but the real surprise is Google’s new Inbox app that appeared on 11.25 percent of TNW readers’ homescreen docks. The new email app from Google app is relatively new and is invite-only although Google keeps setting up online events where it hands out invitations to anyone within a certain time period (usually an hour).

So get to sharing.