At FutureStack, the company’s inaugural user conference, it’s not only launching a few new features and products, but also unveiling its vision for “Rubicon”, New Relic’s software analytics solution that will roll out in the first half of 2014.

Time for a second act

Calling it the “first of its kind”, New Relic’s believes that its software analytic solution (codenamed “Rubicon”) will enable companies and developers to make better use of billions of daily metrics in its system to make smart business decisions in real-time. Although not available right now, CEO and founder Lew Cirne says that it will be built on top of its database, providing business insights, performance views, dynamic visualization, and responses to application queries quickly.

In a statement, Cirne said:

Organizations struggle to find easy, cost-effective ways to collect and make sense of data about their business and their customers in real-time. Software Analytics fills this gap in the market because the state of the business can be found within the application transactions and data.

There is something very powerful about being able to ask your applications questions and get answers back immediately. It can have a measurable, meaningful impact on your business. 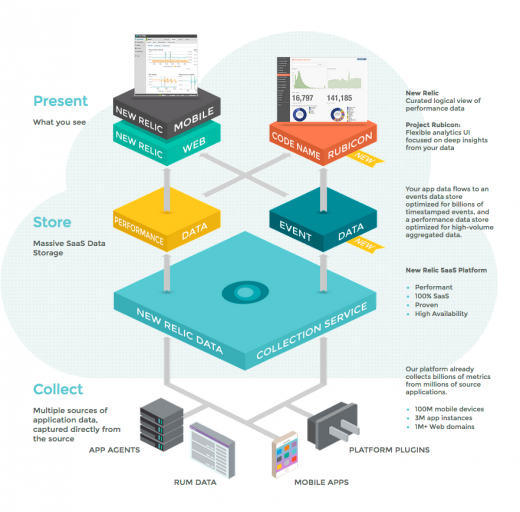 It’s not that New Relic hasn’t enabled its users to be proactive about improving their apps — it’s just now moving into real-time decision making. This new product is being called New Relic’s “Second Act” whereby it will help democratize business information and enable businesses to access analytic data easily and seamlessly.

If you happen to be a developer, imagine being able to find answers to questions such as How many people are live on our application right now? or How do response time trends impact customer adoption? or even What is the uptake of our newest product? These questions are more than simply querying the database to find out where people are having problems on the app — New Relic says it’s about helping to build a better business.

Until now, “Rubicon” was only available for New Relic employees to use and provide insights to its customers. It is now opening up to existing customers as part of its beta program.

The first products to be built using “Rubicon” will make their appearance in the first half of 2014.

Along with “Rubicon”, New Relic is doubling down on its mobile strategy. It is now bringing real-time insights to its New Relic for iOS and Android apps, which will be available in Q4 2013. This comes nearly eight months after the company first unveiled in mobile apps when it set out to offer developer ways to gauge the health of their work and understand any network or web server level errors.

So far, more than 5,000 apps have installed New Relic’s mobile SDK, including those from Sony, ModCloth, RunKeeper.

When the new SDK is released in Q4, developers will be able to implement user interaction traces, which can help track different activities like screen loading, transitions, etc. at any stage of the user experience and help you understand where exactly needs to be optimized. In addition, on-demand metrics can be accessed like CPU and memory usage, or even understanding the performance of the operating system.

New Relic is probably hoping that developers will not only be able to monitor activity on mobile apps quickly, but better understand friction points that their customers have.

The company says those already using the mobile SDK will automatically be upgraded to this “extended version” when it’s released later this year.

In this string of updates, we can’t forget that there have been additional updates made to New Relic’s core product. We’re told that there are additional update being made to help “extend its service”. Here’s a list of the features the company is rolling out today:

None of the above listed features and products will change what users are currently paying for any of New Relic’s three pricing tiers.