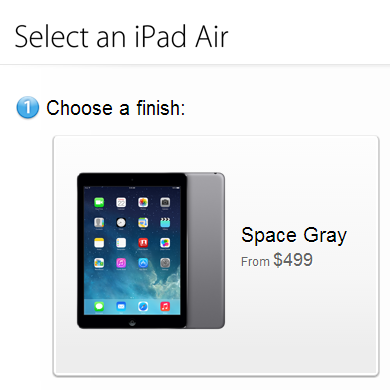 Apple unveiled the iPad Air last week and now the tablet devices are available to buy from the company’s website in an initial 42 countries, including the US, China, UK and Canada.

The iPad Air is available in silver/white and gray/black and is priced upwards of $499 for a 16GB Wifi model and $629 for the 16GB and cellular version. Sporting a 9.7-inch Retina display, it weighs just one pound and includes an A7 chip, 5-megapixel camera and a claimed 10-hour battery life.

The new iPad Mini, which features a 7.9-inch Retina display with a 2048 x 1536 screen resolution, is coming sometime in November and will cost $399 for the 16GB WiFi-only model, while the cellular data-equipped version will be $529.

The iPad Air went on sale at Apple Stores across Asia this morning, and stores in Europe and North America will follow suit at local times.

Correction: The Retina iPad Mini is not on sale yet as we initially reported, apologies for any misunderstanding caused. (Obviously we’re so keen to see it.)

Roundup: The first hands-on reviews are full of praise for Apple’s iPad Air