This article was published on December 16, 2015

Hey, did you know the new Star Wars film was opening this week? If the intense marketing didn’t tip you off, this might: Apple Music now has its own Star Wars radio station. 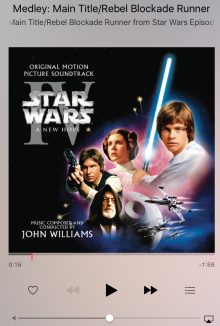 What will you find when you press play? A whole lot of legacy soundtrack tracks and random sound effects. When I pressed play, there was a seven-second soundbite of what I assume was a tractor beam.

It led right into the main theme song from the original movie, though, so at least it’s not completely random.

You’ll also hear things like R2 beeping at you (it’s likely subliminal messaging for you to subscribe to Apple Music after your free trial is over) or Darth Vader breathing in your general direction.

While it’s definitely advantageous of Apple, it’s good for listeners, too. Casual Star Wars fans will like the new station, and aficionados will love it.