Apple is granting refunds to international customers who signed up for iTunes Match before the official launch in their countries, evidence shows.

As we reported yesterday, Apple had apparently rolled out the service across multiple locations, including the UK, Australia and Canada, where users were able to sign up – and pay – the annual subscription fee for iTunes Match: 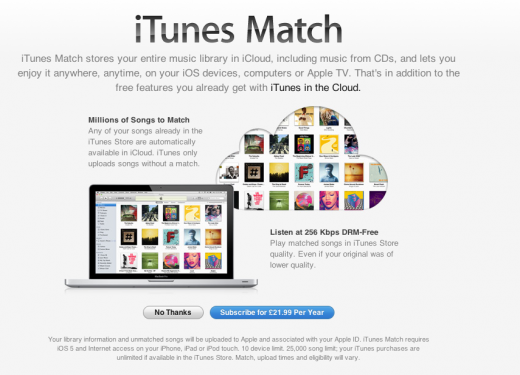 The problem? iTunes Match’s service is not working yet, nor is there a public set date for its launch in these countries. Yet, subscriptions run for one year from sign-up date, which means clients are wasting money on a service they can’t use.

This obviously explains why Apple has been granting refunds to customers who requested it – a straightforward procedure we experienced first-hand after accidentally signing up while testing the service in the UK.

In other words, it seems the bugs we had noticed during the sign-up process were actually an indication that Apple has accidentally launched the service prematurely.

While iTunes Match is mentioned in Apple’s terms and conditions in other countries, such as Chile, the service is currently available in only two countries: the US and Brazil (see our post). It remains unclear why iTunes Match has started to show up outside of these two countries, but this incident will certainly fuel hopes of an imminent launch across multiple locations.