Searching for apps is typically pretty straightforward, so long as you know what you’re looking for. But when you don’t, both Apple and Google’s respective shops (the App Store and Google Play) do an absolutely terrible job of helping you out.

I’m sure you’ve noticed by now that GIFs are basically our new way of conversing with one another. At TNW Europe, Giphy’s CEO Adam Leibsohn asserted as much in a talk about how GIFs were taking over the world and replacing speech.

He asserted that with a GIF, you could replace entire lines of text when digitally communicating with others. It’s true, too — and probably why Twitter added Giphy support and a dedicated GIF button.

Long story short: GIFs are rad and we all love them. So why is it so difficult to find a really good GIF-making app?

When I say ‘good’ what I really mean is that I want a GIF app that can make a GIF out of anything, even other GIFs.

That’s surprisingly hard to find, too. A search through the App Store for ‘GIF maker’ returns some absolute nonsense. I don’t mean nonsense in the fact that the apps returned via search aren’t what I was looking for; I mean nonsense in that something called ‘Cool Texts — Cool Fonts, Emoji 2 Stickers, Color Keyboard Symbols &’ (it cuts off there) was found in the mix.

More to the point, it was found ahead of actual GIF making apps, of which there are plenty. 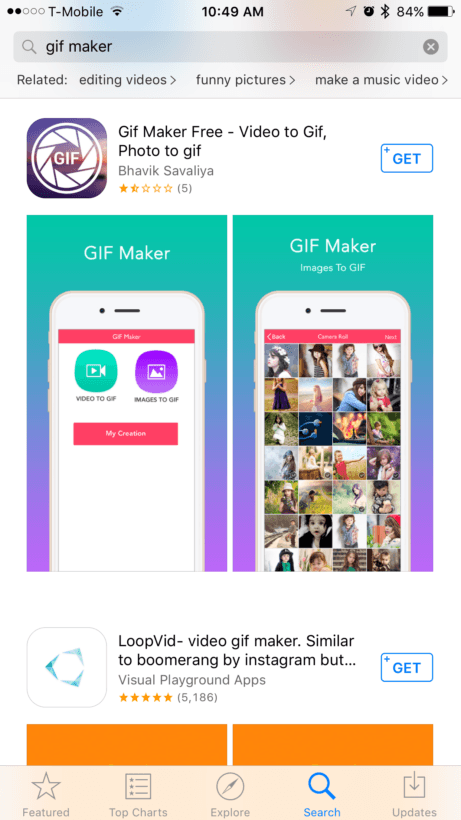 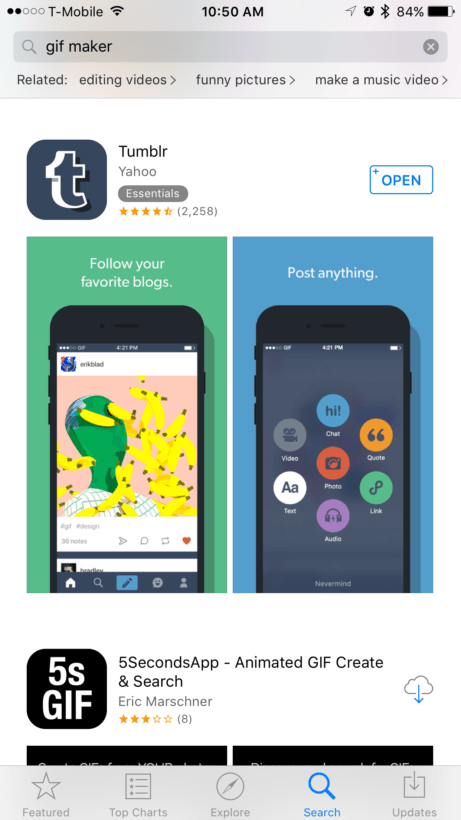 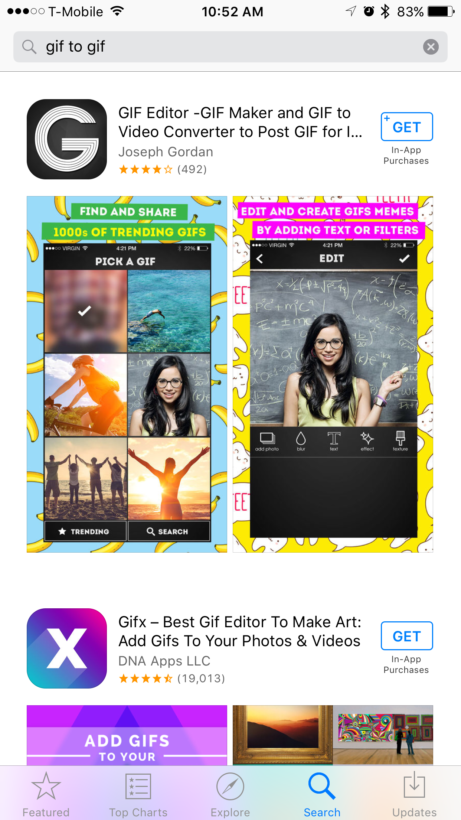 Let’s walk this down further: not only did I get some not-really-a-GIF-maker app clumsily placed in my search options, there were apps with 1-star reviews in there — and they were ahead of apps that had better (and more) reviews.

Not-really-GIF-making apps were also placed ahead of apps Apple deems ‘essentials,’ and apps I’ve downloaded before.

New searches also don’t really help. ‘GIF to GIF’ returned the same kind of junk I wasn’t looking for, most of it not even making GIFs out of GIFs (#meta). 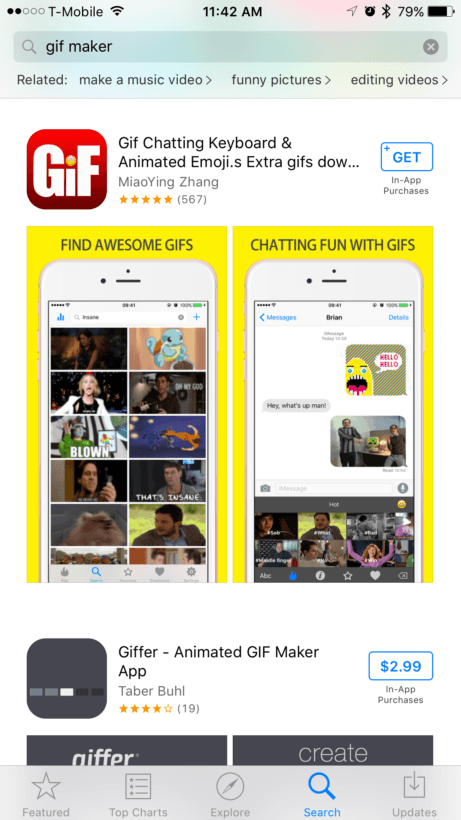 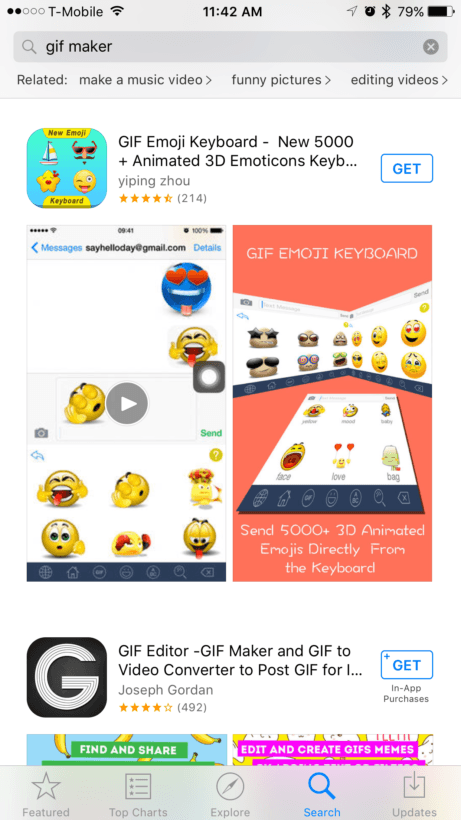 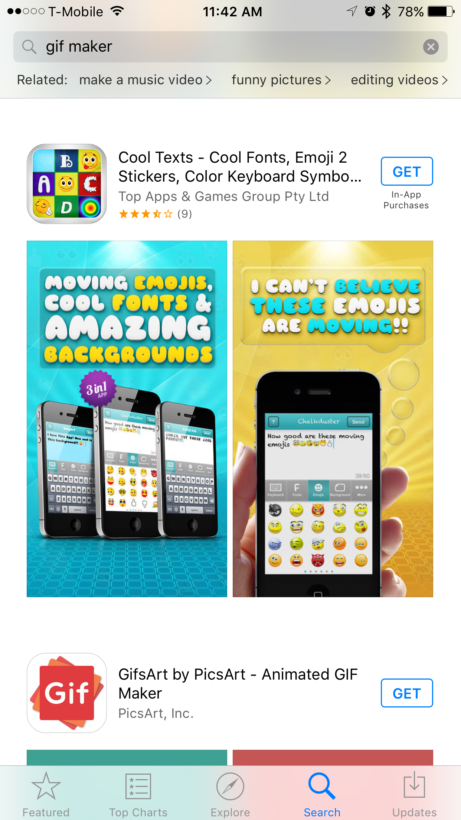 What prompted all of this was Product Hunt. Someone resurfaced an app originally published in 2014 named GIF Toaster, which added some new features on June 24.

More to the point, GIF Toaster added GIF to GIF support as part of its update — the very thing I was just looking for via App Store search. I grew tired of scrolling in the App Store before I even found GIF Toaster.

GIF Toaster isn’t perfect, and it offers a $1.99 in-app purchase to unlock a lot of features. But even if you don’t spend a dime, it’s one of the best basic GIF making and editing apps there is. I’d consider it ‘pro level GIF-ing,’ which I assume will also soon be an Olympic sport for millennials to lazily compete in soon.

So here’s this all-in-one GIF app that doesn’t surface near the top of any GIF search results except for ‘video to GIF’ where it’s fourth — behind ‘Video to GIF’ which ranks first with a 2.5 star rating.

Because it was just updated, GIF Toaster’s four-star rating doesn’t register. Another travesty.

A problem that needs addressing

I’d like to see both Apple and Google make changes to App Store marketing guidelines to help the language of app titles and descriptions tie more directly to what they do. I shouldn’t be seeing apps like ‘emoji search’ when I’m looking for something to make GIFs with.

Similarly, why would a GIF keyboard find a home ahead of apps meant for the creation of GIFs? It doesn’t make sense.

The App Store algorithm needs a bit of tweaking, too — but that dovetails with marketing language. I would rather see apps I’ve previously downloaded, essentials and highly rated apps ahead of everything else in the category.

And when I do dig past the surfaced app segments listed above, make the descending list make sense. Show me well-reviewed and widely downloaded apps instead of stuff that apparently has no place in that search.

Apple has done a pretty good job of curating app updates of late, but lets take GIF Toaster as an example of how it fails.

Apps are updated all the time, and many end up finding their way into the ‘New Apps We Love’ category towards the top of the App Store. The apps aren’t really ‘new’ per se, but the update qualifies them to be there. 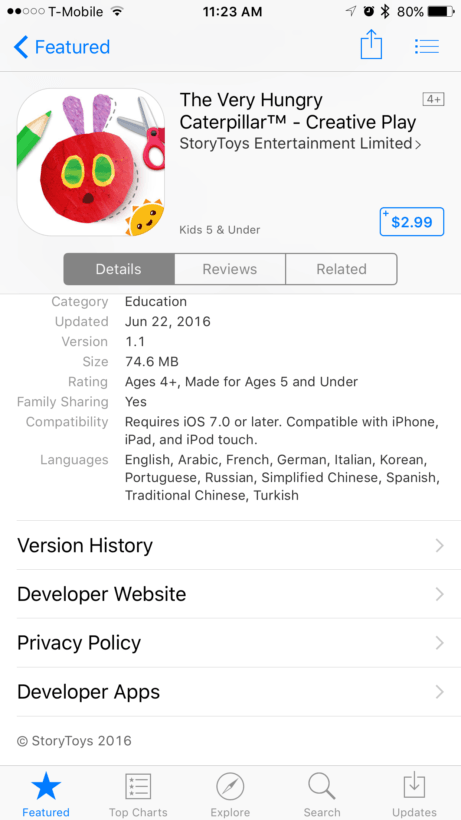 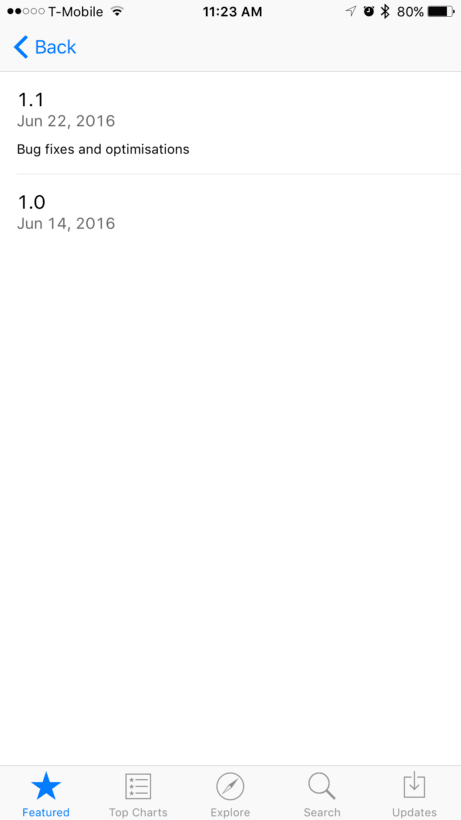 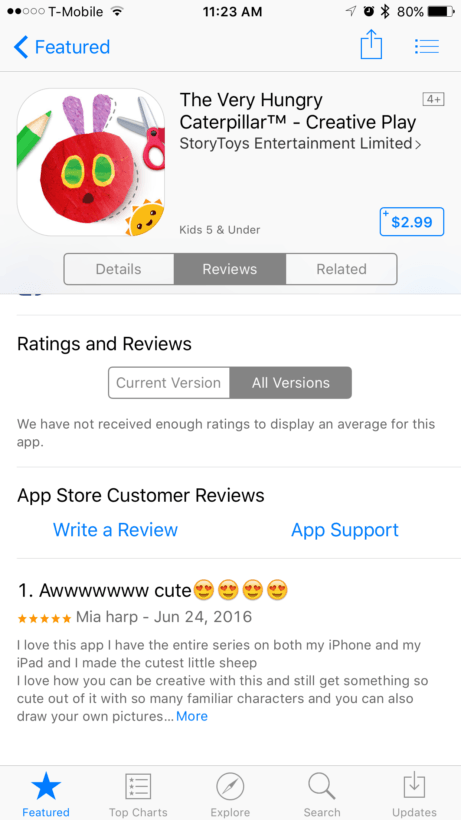 In the case of GIF Toaster, there’s reason to consider the process a complete failure. Its latest update was a massive one, adding a ton of features. In the same timeframe, apps like ‘The Very Hungry Caterpillar’ were surfaced with an update that included ‘bug fixes and optimisations.’

The ‘new apps we love’ section is obviously coveted, and there’s a lot of chatter about ‘it’s who you know at Apple that gets you featured’ within the developer communities — but that’s conceptually wrong.

An app like GIF Toaster deserves to be featured; it’s been in the App Store for about two years, has (overall) great reviews and the development team just committed to a gigantic update. The developers are doing exactly what Apple wants — making a home in the App Store — but they’re not being officially lauded for their efforts.

Sadly, that’s an empty victory if I can’t discover those apps. Here’s an example:

This is real. A tarot card app shows up when I’m looking for fitness apps.

I shouldn’t have to rely on Product Hunt to show me anything, but I feel as though I have to. GIF Toaster — stupid name and icon withstanding — is exactly what I was looking for. The fact that we’re now turning to a secondary source to find user-submitted apps to be surfaced is sad.

But Product Hunt works. App Store search does not. I hope there’ll parity between the two at some point, and if that day comes — I’ll make a nice GIF to celebrate it.