App.net, the ambitious, year-old project to built a social platform, has released a new feature that it hopes will be the first killer app that helps it gain serious mainstream traction. Broadcasts is a push notification system that delivers messages to users who opt-in to follow channels from content providers.

App.net founder Dalton Caldwell tells me that he believes push is “a new medium” waiting to be explored, in the same way that photos and short video are hungrily consumed by Internet users today. As we’ve discussed before, App.net is a platform dedicated to hosting developers’ apps, with the aim of hatching a connected ecosystem that is supplemented by the proceeds of user subscriptions rather than Twitter of Facebook-style advertising.

The basic principle of Broadcasts is simple: it allows third-parties to connect directly with audiences. For users, it represents a medium to receive news and information without the noise found on social networks — but anyone can create channels for any kind of alerts that they want.

For example: a band could use Broadcasts to notify its fans of tickets for an upcoming gig, a journalist could push out their latest feature to readers, a filmmaker could canvass for a new crowdfunding campaign or Twitter-like emergency alerts could be dispatched.

The potential usage cases are wide, but Caldwell cautions that good channels will ‘curate’ content and push out a maximum of two updates per day, to avoid bombarding their audience — who can unsubscribe at any time.

The feature itself is baked into the App.net app — which was formerly known as Passport for App.net and is available for Android and iOS — and is also integrated into App.net’s Twitter-like alpha microblogging service.

To get started, broadcasters simply set up a channel — via the app or the alpha site — and then push out messages that consist of a title, description and optional image and URL. The feature also supports RSS feeds (only one post will be broadcast per day) and there’s an API allowing support to be built into third-party services and apps. Additionally, Channels also support multiple users.

Channels and notifications themselves can be promoted to a multitude of social networks to attract subscribers and a larger audience, but notifications are only received via the App.net app — which is the hook to bring new (or inactive) users aboard.

Caldwell admits that App.net — which he says has 190,000 registered users — has thus far “struggled to find a core value proposition or solve a problem” for many people, but he’s optimistic that Broadcasts is a service that could genuinely broaden the appeal and audience of the App.net platform, which is often mistaken for merely being an ad-free version of Twitter.

“I’m excited about this new feature because I think people really want it. There’s a crispness where there are already accomplishments of this elsewhere,” he says, referring to chat apps out of Asia that are seeing some success with push messages, albeit as a more commercial platform for marketing.

As we recently noted, Japanese app Line’s ‘official’ accounts model is generating traction among companies and celebrities. Former Beatles singer Paul McCartney secured 3.8 million followers on Line — double his Twitter following — in just two weeks, each of whom receives push notifications from McCartney’s official account — which the star pays Line to use. (He’s since nearly doubled his Line follower number.)

Caldwell isn’t intending Broadcasts to be such a cash cow — the feature is free to use for broadcasters and their audiences — the aim is really to gain traction among new users, and expand App.net’s potential. The company expects to offer paid premium features around Broadcasts in the future — such as analytics or specific geo-targeting — and of course those wanting to receive notifications from channels must join App.net itself, which costs $5 per month (or $36 per year), although a limited, free option is available.

On future plans, Caldwell is candid that App.net must continue to bring developers on board, and give them the tools to create compelling apps and services for users.

“It’s up to us to find that killer app to drive adoption,” he admits. “The developer updates [that App.net regularly releases] are great and all is going well on that side, but we need play to our strengths and find user cases for the next level of traction. There are lots of developers who want to build apps, but many are waiting for us to get bigger first.”

App.net already provides a range of APIs for developers to build on — including Messaging, Files, Search and Places — but support for games, a segment with real viral potential, is noticeably absent from the list. Caldwell admits, once again with honesty, that this is an area that requires focus.

“I want to see our whole ecosystem of apps performing well in app store charts. There are some things that we can do around games, but it needs to be attractive to game developers, and it isn’t attractive right now — the offering is not good enough in its current state.” 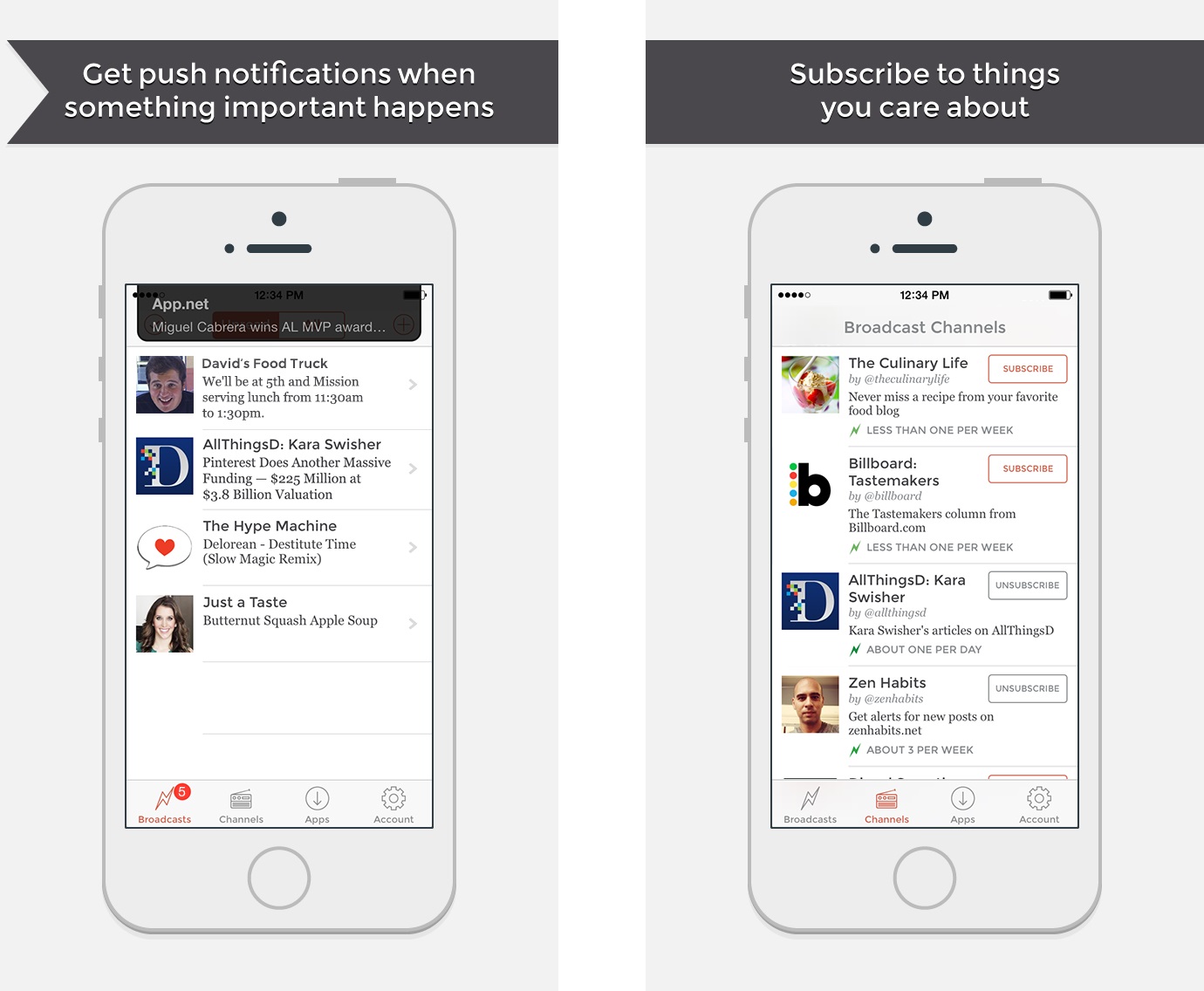 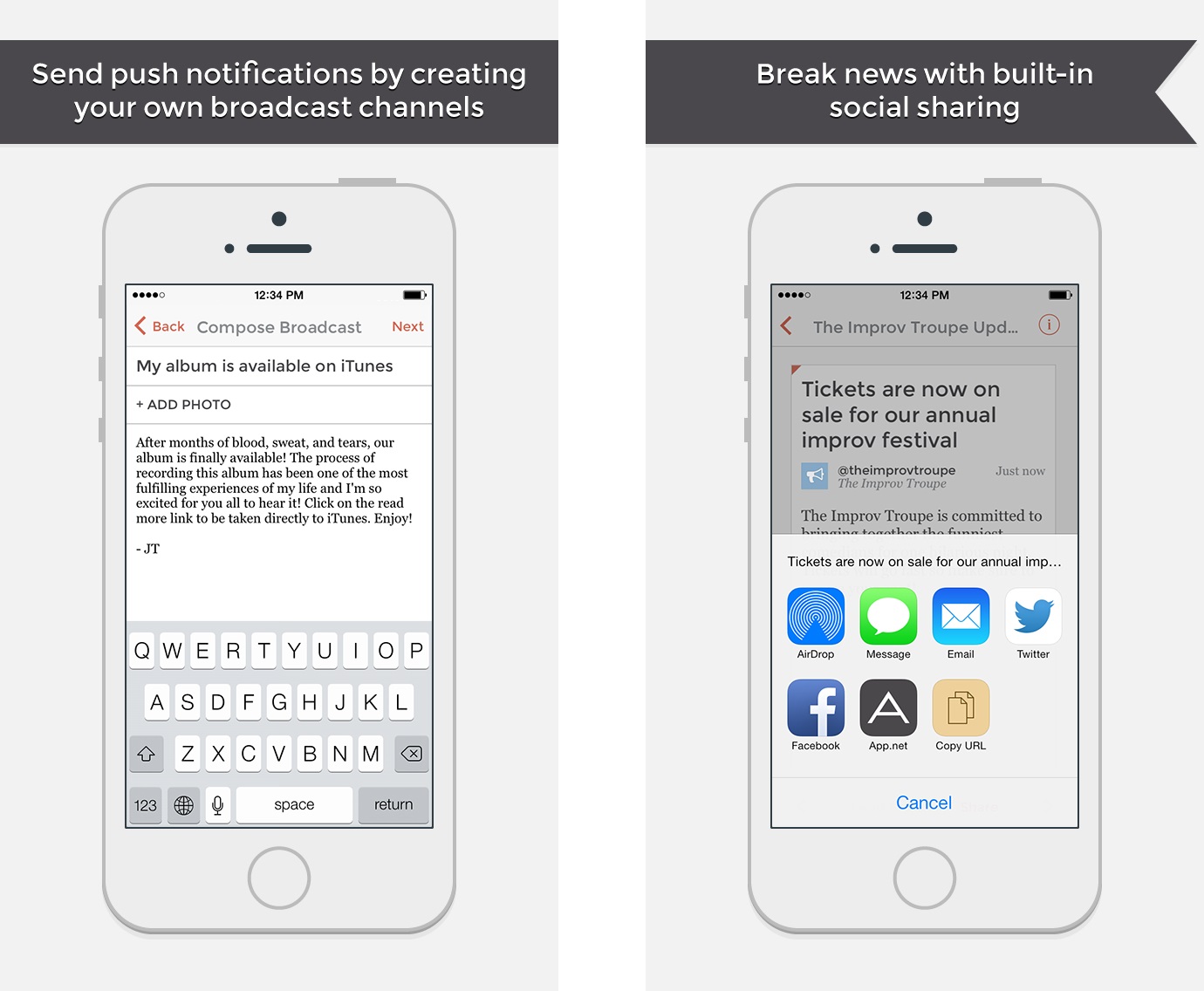 As it stands, App.net is making a big push with Broadcasts, which is launching on iOS, Android and Web, while a Chrome extension, embed code, WordPress plug-in, support for Hootsuite and API are all available on day one.

“We’re making the tools as simple and flexible as possible so developers and the community can surprise us with what they do,” Caldwell says.

It remains to be seen if new users will pay $36 per year to access breaking notifications alone, but the feature is arguably the first that App.net has shipped that could appeal behind its demographic of geeks and developers. A few more — and the potential addition of games — could turn it into an altogether more attractive proposition for the average mobile app user.

Broadcasts will compete with a number of existing apps in different ways, including the Breaking News app, Twitter’s Eventparrot and TNW’s own Push.co, a product of our Labs.

You can follow TNW’s breaking news channel here — we are also on App.net alpha.