Huge news this morning: Web services giant AOL (note: my employer until very recently) and Microsoft have struck a deal that will see the former sell more than 800 of its patents to the Redmond software juggernaut. In addition, Microsoft will (non-exclusively) license more than 300 additional patents and applications.

Aggregate proceeds of the agreement is a whopping $1.056 billion, in cash.

According to the terms of the deal, AOL will retain over 300 patents and patent applications spanning technologies for advertising, search, content management, social networking and mapping, among others, following the sale.

AOL also received a ‘perpetual’ license to the 800 patents being sold to Microsoft.

AOL expects the deal, which includes the sale of a subsidiary on which AOL expects to record a capital loss for tax purposes, to be completed by the end of 2012, pending satisfaction of customary conditions and regulatory approvals.

Update: AllThingsD says the subsidiary in question is … Netscape.

For some insight into AOL’s overall intellectual property, check Envision IP’s recent dive into its patent portfolio (see screenshot below, via AllThingsD). 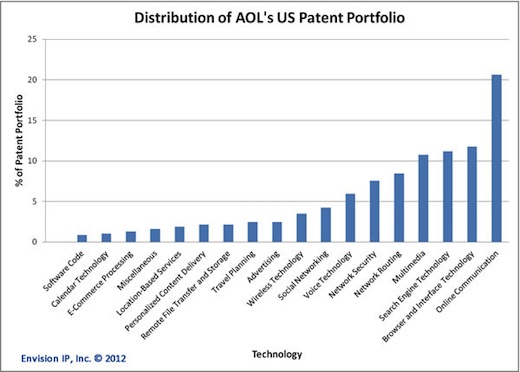 Tim Armstrong, AOL’s chairman and CEO, in a statement said the deal with Microsoft is “the culmination of a robust auction process” for its patent portfolio.

Armstrong had been pumping up AOL’s patent trove in public to anyone on Wall Street who would listen a lot lately, as recently reported by AllThingsD.

It’s not surprising that AOL sought to monetize its patents in some way, with pressure from shareholder Starboard Value and others mounting of late.

Now that AOL has turned a great deal of its patents into dollars, a transaction that it says is “tax-efficient” and will result in a significant return to shareholders, it’s worth asking the $1.056 billion question: what is Microsoft going to do with these patents?

(Sidenote: Microsoft is an investor in Facebook and a partner of Yahoo – both companies currently embroiled in bickering over social networking patents.)

AOL to sell more than 800 patents to Microsoft; Microsoft to license more than 300 additional patents and patent applications from AOL

Transaction is tax-efficient for AOL

Upon closing, AOL expects to return a significant portion of the proceeds to shareholders

NEW YORK–(BUSINESS WIRE)–AOL Inc. (NYSE: AOL) (the “Company”) today announced that the Company has entered into a definitive agreement to sell over 800 of its patents and their related patent applications to Microsoft Corporation (NASDAQ: MSFT) (“Microsoft”) and to grant Microsoft a non-exclusive license to its retained patent portfolio for aggregate proceeds of $1.056 billion in cash.

Following the sale, AOL will continue to hold a significant patent portfolio of over 300 patents and patent applications spanning core and strategic technologies, including advertising, search, content generation/management, social networking, mapping, multimedia/streaming, and security among others. AOL also received a license to the patents being sold to Microsoft.

The patent sale includes the sale of the stock of an AOL subsidiary upon which AOL expects to record a capital loss for tax purposes and as a result, cash taxes in connection with the sale should be immaterial. Additionally, AOL expects to utilize approximately $40 million of its existing deferred tax assets, representing approximately 20 percent of its total deferred tax assets, to offset any ordinary income taxes resulting from the license of its remaining patent portfolio.

AOL management and its Board of Directors intend to return a significant portion of the sale proceeds to shareholders and will determine the most efficient and effective method to do so prior to the closing of the transaction. Pro forma for the sale and license, as of December 31, 2011, AOL would have had approximately $15 per share of cash on hand.

“The agreement with Microsoft represents the culmination of a robust auction process for our patent portfolio,” said Tim Armstrong, AOL’s Chairman and CEO. “We continue to hold a valuable patent portfolio as highlighted by the license we entered into with Microsoft. The combined sale and licensing arrangement unlocks current dollar value for our shareholders and enables AOL to continue to aggressively execute on our strategy to create long-term shareholder value.”

“This is a valuable portfolio that we have been following for years and analyzing in detail for several months,” said Brad Smith, General Counsel and Executive Vice President, Legal and Corporate Affairs, Microsoft. “AOL ran a competitive auction and by participating, Microsoft was able to achieve our two primary goals: obtaining a durable license to the full AOL portfolio and ownership of certain patents that complement our existing portfolio.”

The transaction is expected to be completed by the end of 2012, upon the satisfaction of customary conditions and regulatory approvals, including expiration or termination of the applicable waiting period under the Hart-Scott-Rodino Antitrust Improvements Act of 1976, as amended.