If you live stateside and hadn’t heard of Amphion Loudspeakers, I wouldn’t blame you. The small Finnish audio company has been around for over two decades, offering a neatly curated line of speakers for home and professional use alike, but doesn’t have a huge presence in the US. Needless to say, I was curious when the company reached out to let me try the Argon1, a high-end compact bookshelf speaker coming in at roughly $1,600.

Truth be told, part of my interest in Ampion was its design approach; I’m a sucker for speakers with clean lines, and the Amphions fit the bill perfectly. The boxy white cabinet — framing a 5-inch woofer and 1-inch tweeter set massive waveguide — feels timeless; this is a speaker that could look good in your home for decades to come.

This is in part because Amphion provides a rare option in the speaker world… colors! While the cabinet itself comes in white, black, and walnut finishes, the included metal grilles can be customized with a multitude of color options. I’m a sucker for blue, so that’s what I went with for my review unit. Aesthetics aside, lifting the hand-made speakers onto their stand revealed a surprisingly hefty cabinet that feels solid to the touch; the Buchardt S400, a speaker that bears a passing resemblance to Amphion’s lineup, does not feel quite as dense as its Finnish competitor.

Aside from being an aesthetically pleasing touch, the Argon1’s large waveguide serves an acoustic purpose: controlling directivity, or how a speaker radiates sound into a room. The quality of a speaker‘s soundstage depends not only on the sound that travels in a direct path from the speaker to your ears, but also on the sound that reflects off your walls before you hear it. After all, it’s these reflections that provide a pair of speakers with a sense of space; without reflections, speakers would be little different than headphones.

It is not so surprising, then, that optimizing directivity is important for any speaker that claims superior sound. Woofers and tweeters have inherently different directivity patterns due to their different sizes; a good waveguide helps smooth the transition in directivity from low frequencies to high frequencies by effectively matching the directivity of the tweeter to match the woofer at the crossover, where one driver ‘hands off’ its sound to the other.

Larger waveguides can also serve to narrow the directivity, lending to a more focused soundstage and minimizing room interaction. This isn’t always preferred, but it can be desirable if you have a particularly bad room.

I was glad to hear, then, that after a bit of experimenting with positioning my impression of the Amphions was very positive.

It was the speaker‘s soundstage that immediately impressed me, with a sense of clarity to the soundstage that was among the most focused I’ve heard in the price range. Mind you, I don’t always prefer this quality — I usually gravitate towards a more diffuse but expansive soundstage — but I could find no fault in the Argon1’s imaging performance.

In terms of tonality, the Argon1 mostly hits the right marks. My initial impression with the speakers pointed towards my listening position was that they were a tad bright — we’ll see why in the measurements section — but it seems like Amphion tuned these speakers for how most people use them, pointing straight forward, or with a minimal amount of toe-in. This balances out the sound nicely.

Female vocals and brass seemed to shine in particular, with clarity and neutral tonality that was immensely pleasing. Male vocals were also good, albeit a bit more uneven. Amphion says it focuses in particular on the region between 2-5kHz, where our hearing is most sensitive. Call it confirmation bias if you will, but I think this helps give the speakers a sense of clarity that eludes others.

I was also impressed by the speaker‘s bass output. Placed about 10-20 inches away from my uneven wall, these little speakers hit the lows with surprising fortitude without being too bloated (Amphion includes foam port inserts should you want to tame the bass when placed near a wall, but I found I didn’t need them). The speaker was able to keep up with heavy bass tracks much better than I expected from a compact cabinet and a single 5-inch woofer, with a good amount of energy into the 40hz region.

That said, keep in mind that I do not listen to music at ear-splitting levels and that any small woofer will run into limitations with volume. A subwoofer is always useful with small speakers as aside from digging deeper into the bass, it frees up the woofer to perform better within its designated frequencies.

As with most of my speaker reviews, I performed an extensive suite of measurements to capture the Argon1’s frequency response and directivity characteristics. Decades of research have shown these to parameters to be the most important in characterizing a speaker‘s sound. Directivity, as implied earlier, is especially crucial; nowadays, its easy to fix the direct sound with an equalizer, but directivity cannot be changed.

The Argon1’s measurements tell an interesting story, showing both how Amphion achieves its primary design goals — solid directivity and a particularly smooth region between 2-5khz — as well as where improvement can be made.

Using a technique that allows me to remove room reflections from my measurements, I can approximate the speaker‘s “true” sound without the influence of my room. We begin with a graph called a ‘spinorama,’ so-called because it involves rotating the speaker to capture its sound at a whole bunch of horizontal and vertical angles — 70 total. The spinorama distills all that data, giving us a detailed overview of both the speaker‘s direct sound and its directivity tendencies.

Explanations of how to interpret these lines are provided over at Speaker Data 2034 and Audioholics, but here’s a quick summary:

What we see above has some very good qualities, along with some notable flaws. I was actually a bit surprised by these results — I performed the measurements after listening to the speakers, and I expected a cleaner response based on how much I enjoyed these speakers. But digging deeper into the data helps us understand Amphion’s approach.

In particular, there is some messiness from 500Hz to 1.5kHz that I wish weren’t there. This appears to be caused by interference from the port output (shown in the gallery below). It’s possible this could be reduced by using the included port plugs (and placing the speakers closer to the wall to compensate for the reduced bass) but I did not test this.

And yet, even after seeing the measurements, the uneven response in this region did not bother me as much as expected. This may be because room interaction increases at lower frequencies; it’s possible the deviation here is more offensive to the eye than to the ear. We can see also see that the mess smooths out substantially predicted in-room response.

There may also be some merit to Amphion’s approach to emphasizing performance where our ears are most sensitive. Above 2kHz, the Amphions are smoother than most speakers I have measured, and this seems to provide the speaker with their ‘refined’ sound. My experience is that this region is also the most responsible for our perception of soundstage and imaging.

The direct sound does seem to be tuned a bit bright, but as noted before, my guess is that Amphion expected people to use the speakers without much toe-in, as is fairly common practice among speakers designed for home listening.

Taking a look at the detailed horizontal response, we can see the response evens out by 20 degrees and maintains a very similar contour all the way out to 90 degrees.

This means that in a typical setup the direct and reflected sound will have very similar characteristics – lending to that impressive soundstage.

Another welcome aspect of the Argon1’s design is how well-controlled its vertical response is.

The Amphion’s feature very good horizontal directivity, but are not necessarily better than other competitors with decent waveguides. But by using an unusually low crossover(1.6kHz) the Argon1 is able to maintain a vertical response that is much smoother than most non-coaxial speakers.

For the speaker nerds, further directivity plots and individual measurements of the port and woofer are included below. It’s also worth noting Amphion emphasizes its work on the speaker’s phase-coherence, but that’s beyond the typical scope of my reviews. 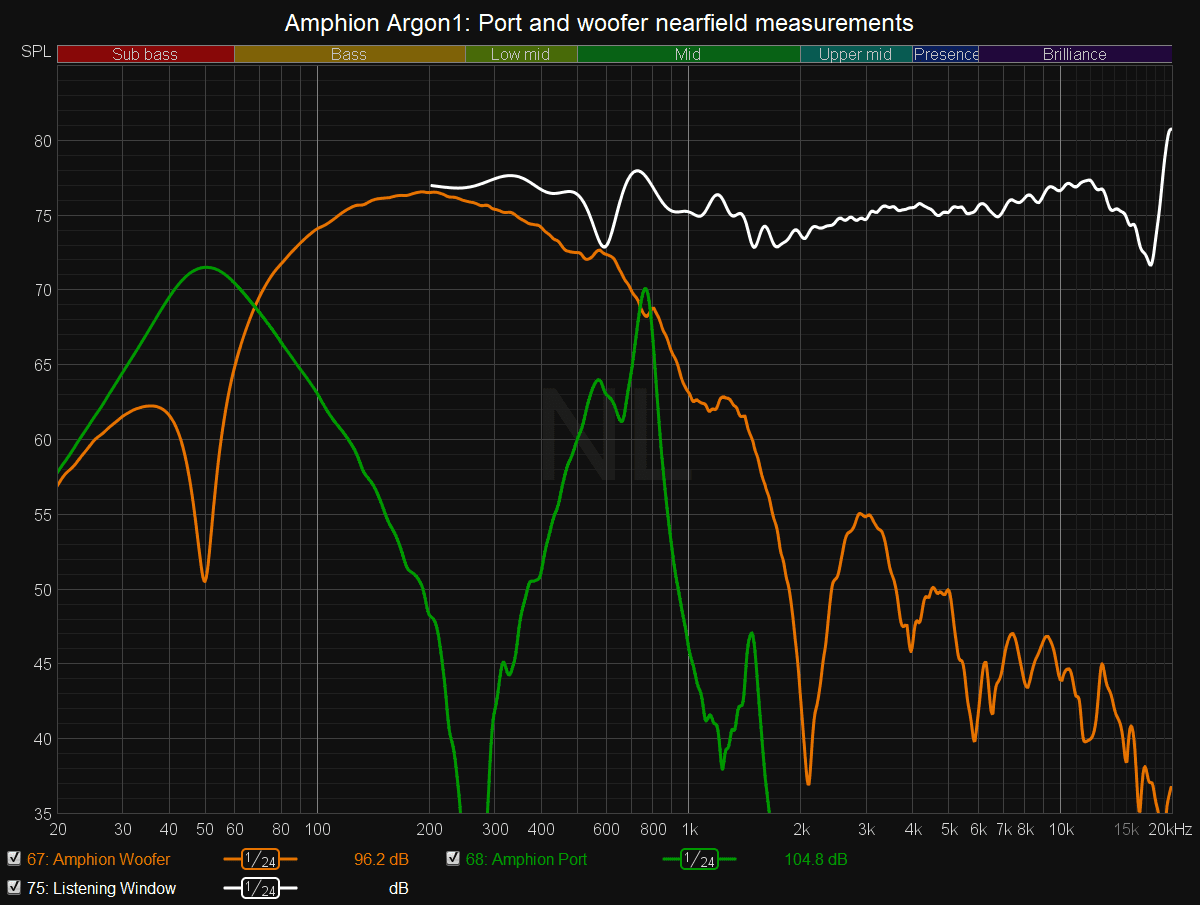 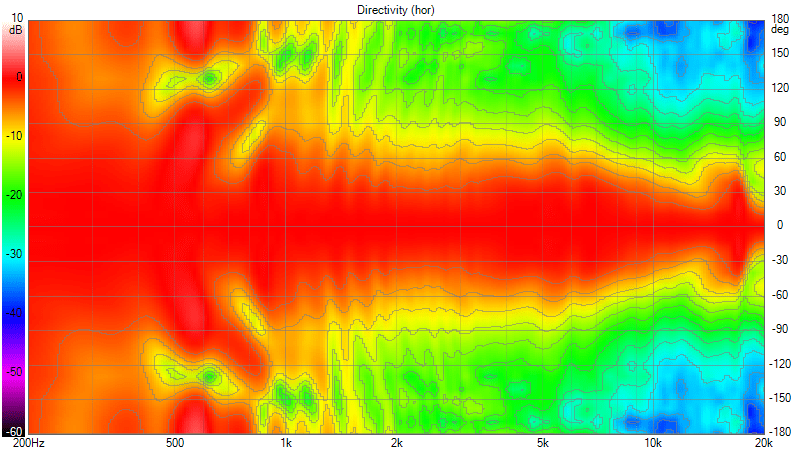 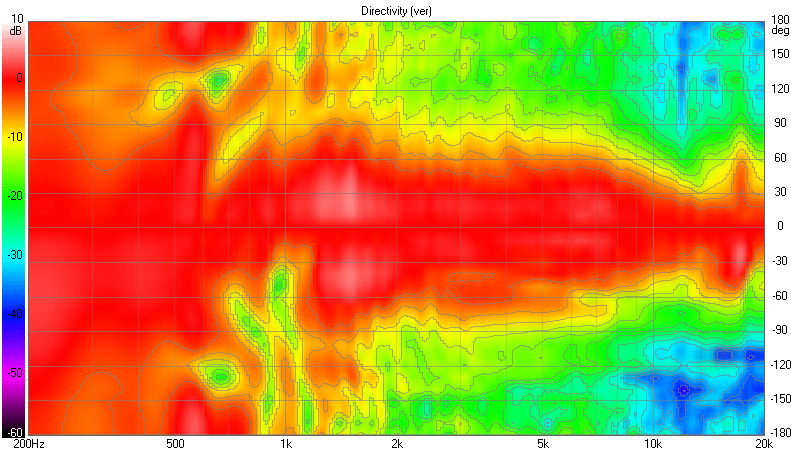 Due to unevenness in the midrange, the technical performance is just shy of excellence, but, the Argon1 also does a lot right where others stumble. Directivity is smooth in its most crucial region, and the vertical directivity gives them an edge over most non-coaxial speakers.

Turning back to my more subjective impressions, the Argon1s are beautiful, and their hand-made design and multiple colorways are pretty rare at this price. If I’m being honest, its looks alone are enough to make me interested, but luckily the speakers sounded excellent to my ears too, with some of the best spatial presentation I’ve heard from a compact pair of passive speakers.

For a $1,600 pair of well-built, stylish compact passive speakers, the Argon1s are well-worth your consideration.