Alipay, the mobile payments company spun off by Chinese e-commerce giant Alibaba in 2011, has announced a significant relaunch of its Android app which has become a digital wallet enabling payments. Alipay — China’s top online payment services — says a version for the iPhone will be available “soon”.

The app, which has been downloaded more than 50 million times, has been rebranded ‘Alipay Wallet’, and that change of name perfectly represents its shift from merely facilitating e-payments to handling online-to-offline (O2O) payments. Overhauled with a significant redesign, it can store and manage a range of payment methods, including credit cards, gift cards and coupons.

Money is transferred via the Internet, barcodes, QR codes and an interesting ‘sound wave payment’ technology. The first three will be familiar to most, but the latter is a feature that uses white noise to communicate between devices and transfer funds between Alipay Wallet users. 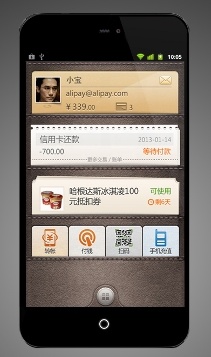 To put it in basic terms, Alipay is moving away from a Paypal like mobile app to a Google Wallet-like solution that can be used offline, and that’s motivated by increasing competition.

Alipay brings extensive expertise and support from the payment world, but it is coming under pressure from Sina’s Weibo microblogging service and Tencent‘s WeChat messaging app, both of which are moving into payments from a background of social.

Sina — which recently passed 400 million registered users — is focused on monetizing its popular, Twitter-like service, and it has tested various payment trials. The most recent saw it work with Chinese smartphone Xiaomi to sell the firm’s smartphones via Weibo, using Sina Pay — its own payment service, formerly known as Weibo Wallet. That partnership saw 50,000 units sold in just five minutes, showing its potential for the future.

Tencent, on the other hand, is a more obvious competitor since it owns the Tenpay payment platform.  Last year, the company confirmed that Tenpay is being integrated into WeChat, a messaging service that passed 300 million downloads this week. WeChat is tremendously popular in China. Already users share photos simply by ‘shaking’ their phones, and it isn’t difficult to imagine a scenario whereby payments could be made in the same way using the app. Given its popularity, WeChat is likely to become a major competitor to Alipay.

Alipay appears to make reference to its socially-focused rivals when it says that smartphone payment “adoption will be retarded until credible standards emerge”. As the sole member of the trio to have an established history in payments, it is unsurprisingly emphasizing the robustness of its own solution.

Like Paypal in the West, Alipay is in a good position in the e-commerce space in China. As we reported last month, the company captured 47 percent of the RMB 976.4 billion ($157 billion) in online payments that were made during the third quarter of 2012. Tenpay took second place with 20.4 percent and, with Tencent’s WeChat strategy emerging, it is looking to increase its share of the pie.

Alipay is arguably in the best position to become China’s de facto digital payment platform, but it will be interesting to see what strategies the challengers adopt.