MessageMe, the US-based chat app looking to rival Line, WhatsApp, Viber and co, has confirmed that it has closed a $10 million round of seed funding and, furthermore, that it has passed 5 million registered users, just 75 days after launch. That follows an impressive start which saw it hit 1 million users within its first week.

The mobile messaging newcomer sprung a surprise last week when we dug up a filing that showed it had closed the new investment just months after it announced a $1.9 million round, which was assembled in late 2012.

The startup has revealed that the new round was led by existing investor Greylock Partners and included participation from a number of other existing backers. 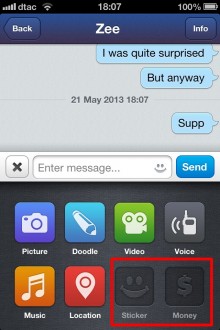 The service adopts a multimedia-rich approach to communications to its iOS and Android apps.

Chats can be one-on-one or in groups and, beyond basic text-based messages, users can share images, drawings, videos, voice recordings, music and their location.

In addition, there are two blank spaces that are reserved for stickers and money; two features that the company will switch on when it turns its focus to making money, CEO (and one of four co-founders) Arjun Sethi told TNW recently.

Speaking prior to the latest round of funding, Sethi said that the primary focus is on growing the service’s user base for now. Indeed, with fresh cash in the coffers, there is less pressure on making money and the company has the resources to grow its team, develop the product and increase its user base.

“We’ve got some ground breaking additions in the pipeline, aiming to change the way we look at communication happening in our world. We’re excited to help lead a team that pushes the envelope on what’s possible, while focusing on a first-class product,” said the founders in a blog post.

But, the service is certainly growing at a fast clip, and the founders shared a range of other statistics to illustrate that.

A recent Informa report found that the number of messages sent by chat apps overtook the volume of SMS worldwide for the first time last year. And, while Message is very much standing in the shadow of giants on that front, one particular thing that is notable about its plans: the founders’ background in gaming.

Sethi and fellow co-founder Justin Rosenthal were part of game maker Lolapps, which merged with game publisher 6wave in 2011. Sethi was centrally involved with a number of top Facebook games, so has experience in scaling social games and making money from content.

That’s crucial because a number of messaging services are moving towards becoming content and games platforms, with promising signs of success.

Line made $58 million during Q1 2013, up from $30 the previous quarter, and Kakao Talk’s games ecosystem is grossing $40 million each month. Equally tellingly is that two billion dollar mobile games firms, GREE and DeNA, are moving into the space with their own messaging apps, Tellit and Comm, respectively.

Yet, in the US — MessageMe’s primary market thus far — no company has stepped up to dominate the mobile messaging with content.

WhatsApp service remains focused on providing communications services, but there are also that are moving. Canada-based Kik is gradually developing its content play — with its HTML5-based Cards platform — while Line and WeChat are translate their overseas success into growth in the US.

That gives MessageMe a decent shot at being among the early movers in the space. Or, at least, the odds are far better than its potential to topple WhatsApp.

Kakao Talk is proof alone of that potential. The Korean service has fewer users than its global competitors, but yet it has built an ecosystem of games firms that is bringing in money an impressive, and growing, rate each month.

In the immediate term, MessageMe will focus on continuing to gain traction among new users and grow engagement on the service. As we said when it landed its $1.9 million round in March: the company has done well so far, let’s see what it can do next.