But while the not-for-profit is renowned for its crowdsourced, text and image-based online encyclopedia, it typically isn’t known for its video content. It’s a lot harder to collaborate and co-edit an uploaded video, right?

Now, however, Wikipedia is looking to ramp up its video offering by tapping Kaltura’s HTML5 video player and suite of tools to allow users to add video content to any Wikipedia article.

It’s worth noting here that users could already add video to articles, as you can see here, plus broadcasters around the world have previously donated footage to Wikipedia and Wikimedia Commons. But with this latest Wikipedia initiative designed to make it a whole lot easier, it could become one of the largest digital video libraries online.

The Wikimedia Foundation first announced the early stages of this collaboration almost five years ago, way back in January 2008, with Kaltura’s technology integrated into the MediaWiki (the software that powers Wikimedia’s sites) platform as an extension called TimedMediaHandler. It replaces the older Ogg-only player that has been used since 2007 and, true to the underlying ethos of Wikipedia, it enables users to collaborate on uploaded videos.

TimedMediaHandler comes with a slew of handy features, for example it supports the royalty-free WebM video format, which makes it easy to import videos encoded to that format, such as freely-licensed content from YouTube’s library. It also supports server-side transcoding – converting from one video format to another – to deliver the appropriate video stream to the user, depending on their bandwidth and the size of the player. For example, support for mobile formats is available.

Some TimedMediaHandler features have already been made available to users of Wikimedia Commons during the development phase, but only in experimental mode. Registered users could enable the beta features in their personal preferences to view a nicer interface and edit subtitles.

Given that the new player is compatible with existing subtitles created during that bedding in period, there is already an existing body of captions it can load and display, for example in this little medley of interviews with Wikipedians:

Wikimedia Commons is the central media repository for Wikipedia and associated sites, acting as a silo for all the multimedia content – it makes sense for it to work like this, because if it merely links to content hosted elsewhere, there could be a lot of missing content if these third-party sites disappear.

Kaltura was founded in New York back in 2006, allowing publishers to manage, monetize and analyze their online videos. After this extended beta, a myriad of infrastructure integrations and review cycles, the Wikimedia Foundation is deploying the “enhanced” video platform across the Wikimedia network from today. These include the English Wikipedia and the Wikimedia Commons media repository, which will now feature the same Kaltura HTML5 player already used within the Kaltura open source platform.

Way back in March 2010, the Open Video Alliance launched its Let’s Get Video on Wikipedia campaign, with a view towards encouraging more folk to upload video content to Wikipedia. It featured a tutorial and a wizard to insert videos into Wikipedia articles. This UploadWizard passed 1-million video-uploads earlier this year since its launch in 2011, and has played a pivotal part in enabling multimedia content on the Wiki sites. 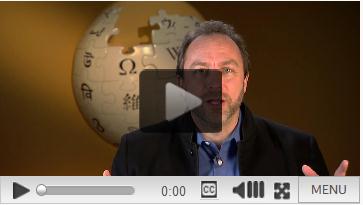 As for the the very long delay from beta through to public launch, well, it seems the reasons are simple. The Wikimedia Foundation has been rebuilding its infrastructure to cater for this dynamic medium. It’s not like YouTube whereby you upload a video, and it remains there in that form – Wikipedia is all about evolving content, and Kaltura’s sequencer lets users remix videos online.

As for the existing video content, you may still see the old video player for now but the newer one is recognizable through its large play button in the middle.

“Successfully translating its radically collaborative nature to multimedia content will be critical to Wikipedia’s transition into the age of video,” said the Wikimedia Foundation in a statement today.

Earlier this year, Wikipedia was credited as killing off the Britannica Encyclopedia after 244 years in print. Can Wikipedia become the number one go-to for educational video content too? Quite possibly.