Fixed broadband prices in Africa have fallen by over 55% in the past two years according to a report by the International Telecommunications Union (ITU).

In the ITU report, out of the top ten countries showing the steepest decline in prices worldwide, nine of them were African countries including Nigeria, Kenya, Uganda, Mozambique, Tanzania, Mauritania, Benin and Zambia. Hamadoun Toure, secretary-general at ITU, said:

“With ICTs as primary drivers of social and economic development, these results are encouraging. Our next challenge is to find strategies to replicate the ‘mobile miracle’ for broadband, which is fast becoming basic infrastructure. Countries without affordable broadband access risk falling quickly behind.”

The fall in prices have been led mainly by the launch of various undersea cables on the continent ranging from the  East African Submarine Cable System (EASSY) to the recently launched West African Cable System (WACS).

Here is an interesting infographic detailing submarine cable launches across the continent: 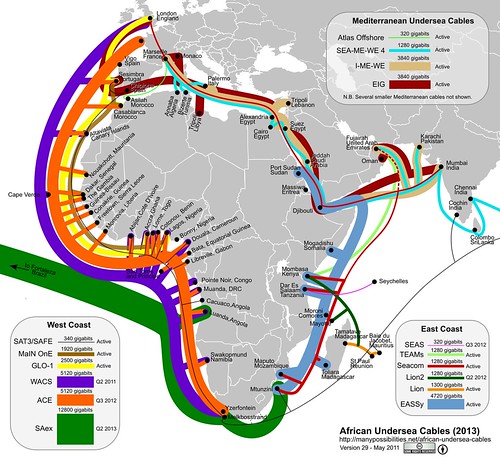 Despite the decline, broadband prices on the continent remain one of the highest in the world. Currently, only one in ten people in Africa use the internet. These statistics are expected to improve over time as more undersea cables are laid.

In addition, there is a need to create broadband policies within regions and countries to help establish operational strategies and frameworks for industry players.

“We think that with increasing demand for broadband accessibility by Nigerians, the time has come for the government and key players in the sector to articulate and develop a policy framework which regulates broadband service delivery and lays out a pragmatic roadmap on how we can get the capacity which is now available across the shoreline to the hinterlands.”

As the African broadband space develops, the hope is that access expands from the continent’s urban areas to rural areas where the majority of people live on less than $2 a day.