If you’re a subscriber to Adobe’s Creative Cloud, you’ll be happy to know that the platform has received some significant updates. Included in the latest release is support for 3D printing within Photoshop CC, the addition of Typekit integration in Illustrator CC and InDesign CC, and new intuitive and seamless tools for designers to take advantage of.

With the popularity of 3D printing, Adobe sought to help make it more appealing to the mainstream so anyone can design and print their own creation. The new feature allows users to do is take objects they find online, from a 3D scanner, or from a modeling tool and import it directly into Photoshop. This will enables designers to implement automated mesh repair and support structure generation in order to protect the quality of the models so when it’s ultimately printed out, it’s exactly how its envisioned.

The new 3D print capabilities in Photoshop CC take the guess work out of printing 3D models for everyone. Before today, there was a gap between the content produced in 3D modeling tools and what 3D printers need in order to deliver high quality results. Now, by simply clicking ‘Print’ in Photoshop CC, creatives can bring 3D designs to the physical world.

Once you’re done creating your 3D model, where can you print it out? If you have your own 3D printer, chances are that Photoshop CC will support it. The software has integration with the most popular desktop 3D printers, including the MakerBot Replicator. But if you need to send the file off to a third-party service, Photoshop CC has a partnership with printing community and marketplace Shapeways or to the publishing service Sketchfab. 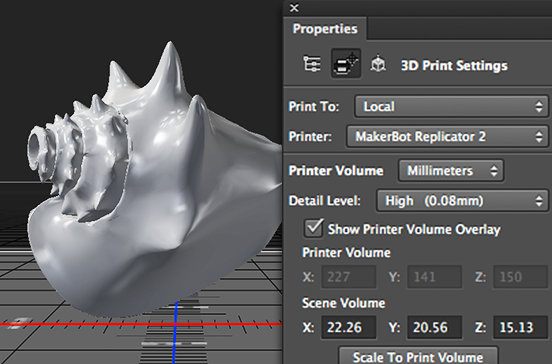 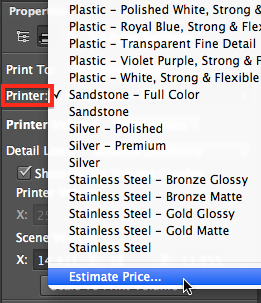 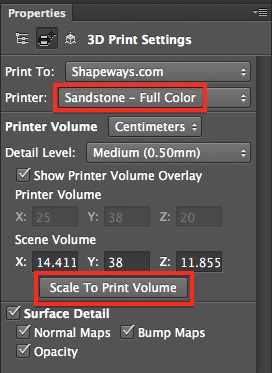 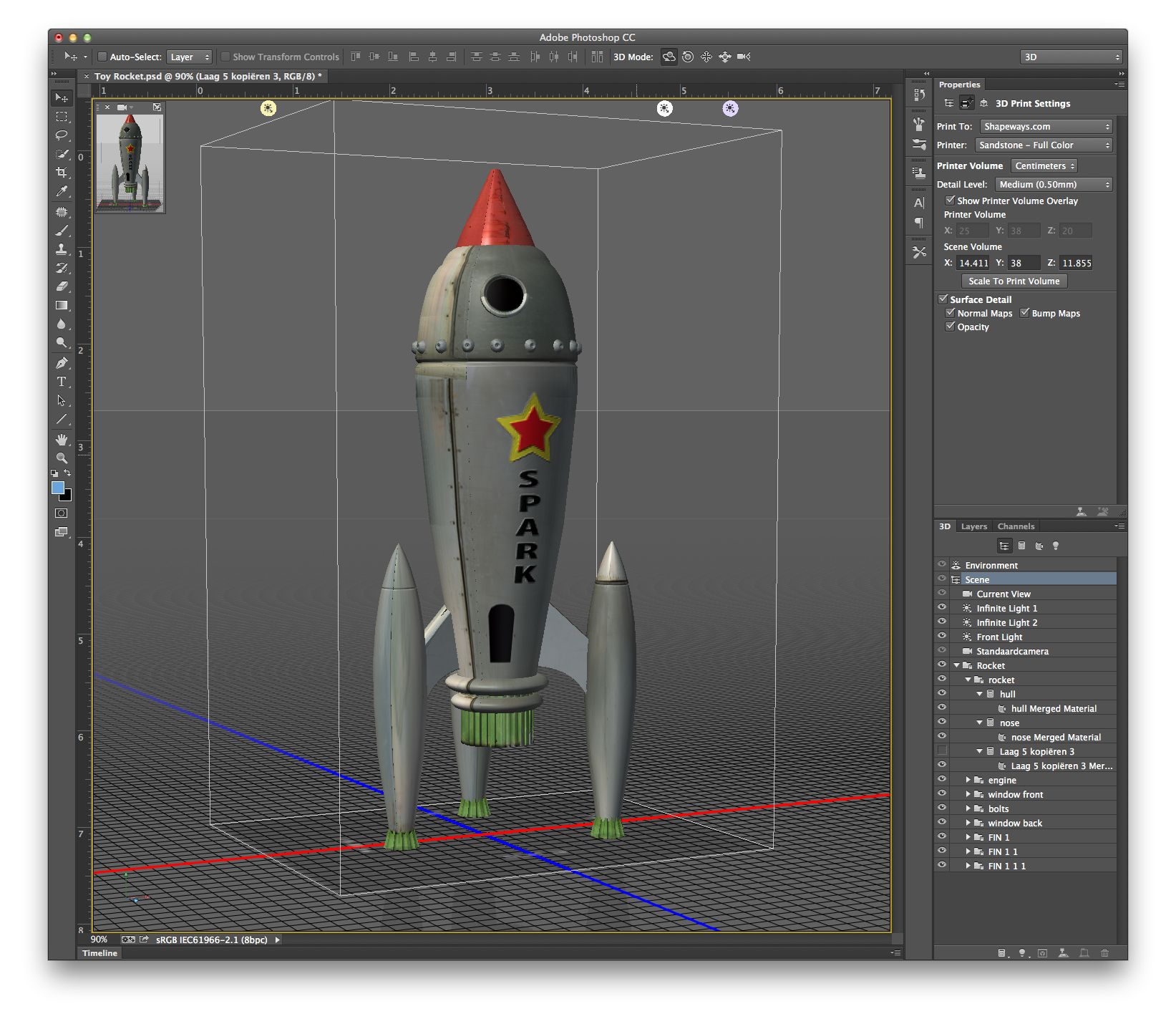 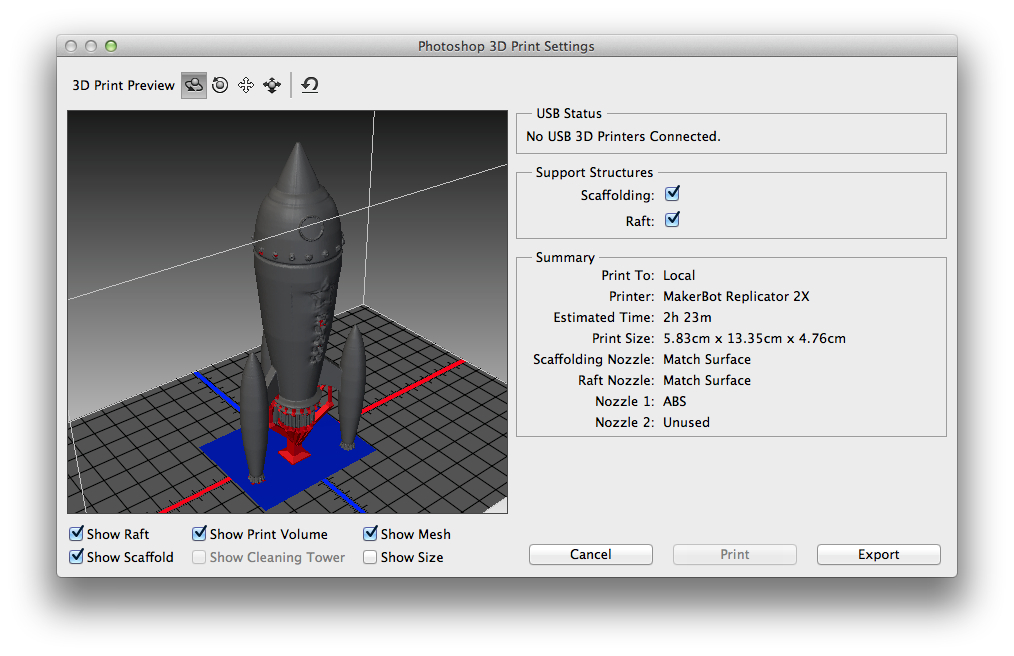 Adobe touts several benefits of this feature, specifically that Photoshop CC will enable designers to produce and finish high-quality, high aesthetic, and full-color 3D content. Projects can be passed to printers with just a single-click and there’s support for a broad range of materials and colors.

While the MakerBot Replicator is the main local printer supported, Adobe says that it will be adding more printers in the future. However, as its software has a open architecture, Photoshop CC ships with a manual to enable users to create their own printer profiles using an XML file.

While 3D printing is a pretty major feature, it’s only for Photoshop CC. However, it’s not the only update Adobe is making to its creative suite of tools.

The company is also adding a new perspective warp feature that enables designers to manipulate images in Photoshop CC like never before. If you have two images overlaying one another but wish them to appear as a single composite image, perspective warp will adjust it using a grid system. It alters the viewpoint from which an object is seen and adjusts the perspective while keeping the rest of the image intact.

Additionally, Photoshop now supports Linked Smart Objects, an evolution of the existing smart objects tool that the software has had for a while. Specifically geared towards team collaboration projects, it functions like an “include” file where a change to that file will modify it no matter what other composite design it’s featured in.

An example of Linked Smart Objects would be if you have a logo featured in multiple designs. If there’s a change to that logo, instead of modifying it in every single design it’s placed in, you can simply access the linked file and modify it there. When saved, the changes will be made universally. This new process eliminates the single file, single designer workflow.

Adobe Illustrator is also receiving an update that makes its tools more intuitive. One addition users will notice is the new Live Corners controls that helps create perfect, editable, rounded corners on any design. This is a feature that Adobe brought over from Photoshop and tells us has been highly requested for years.

The pencil tool is also receiving an upgrade — it’s been completely rewritten to help it be more precise. Basically, although you’re drawing using a mouse, this tool now will respond like you’re holding the actual pencil. It’s described as having the accuracy of the pen tool, but with the fun of holding a pencil. Designers can adjust the fidelity and accuracy of the pencil.

Illustrator CC now includes a path segment reshape option that will take any straight line or existing object and transform its perspective. Lastly, the application includes a responsive scalable vector graphics (SVG) mode to help designers produce images for responsive websites. Once enabled, if a browser window is reduced or enlarged, the vector graphics will scale accordingly and be made responsive. Previously, these file types weren’t affected.

If you’re an InDesign users, Adobe hasn’t forgotten about you. It has added in a new tool to help create hyperlinks faster and easier, integrated itself with TypeKit to help prevent that pesky “Missing Fonts” error message from showing up, and added support for EPUB 3.0 specifications and pop-up footnotes for eBooks. Japanese Vertical Composition and Hebrew and Arabic text support is also included in this version.

Adobe’s code-free site builder is also receiving a few updates. Specifically it now has a new library panel that makes it easy to add objects like contact forms and other things that you don’t want to keep designing over and over again. Additionally, social widgets have been included, giving designers quick access to Facebook Like, Google+, Twitter, LinkedIn, and PayPal buttons.

Other new things include an improved Exchange, a community marketplace where you can browse and download other work designers have create to add to your own site. Being able to animate objects on sites has also been improved with more scroll effects. And you can even have a full screen slideshow.

It’s been nearly a year since the company decided to shift its focus entirely on the Creative Cloud, a service that gives designers access to Adobe’s suite of applications over the Web. Since that time, more than 1.4 million users have signed up for either a free or paid membership. Adobe has kept itself busy iterating its software to meet the needs of designers — it tells us that more than 500 new and enhanced features have been released, there have been 50 feature bearing updates, and more than 15 billion page views per month for TypeKit.

Resetting the clock so everyone can test out the new features

Recognizing that there have been quite a few updates since the beginning, Adobe is resetting the 30 day free trial window for those using Photoshop, Illustrator, InDesign, and Muse. If you’ve tried the product between May 2012 and today, you can go back and enroll in a new trial period. The company is interested in seeing what designers create while also giving them an opportunity to take the new features for a spin.