With certain technology, according to Adam Richardson, creative director at frog design, people have to conform to the technology while other technologies conform to us.

During his afternoon keynote speech today at The Next Web Conference, Richardson said he believes that computers and phones are on a collision course. In the past, we believed that in order to truly understand computers, we thought we would have to go into a computer (i.e. Tron) but now, computers are stepping into our world (i.e. augmented reality). Richardson believes that the same thing is happening to the browser: “We can now walk inside the browser.” 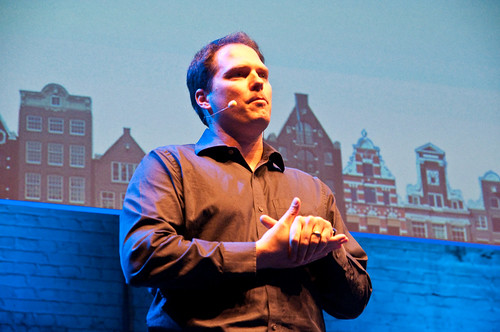 Objects and the web are intersecting, especially in healthcare. Richardson calls this Webjects. Richardson’s webjects basically come in two types: objects in the web and the web inside objects. Basically he believes that all physical technology in the near future will be web-enabled, and that the lines will further blur, especially in how we interact with more everyday public objects such as kiosks. That said, Richardson thinks that we’re still at the “horseless carriage” stage of merging these technologies (i.e. just throwing together two technologies without really thinking about how they will work together).

Adam Richardson keynote The Next Web 2010

In addition to his work at frog design, Richardson is the author of Innovation X: Why a Company’s Toughest Problems are its Greatest Advantage. He regularly writes and speaks worldwide about innovation, business and design and we were delighted he was able to join us in Amsterdam today.