Facebook — the equivalent of cigarettes for your mental health — turned 15 today. We were going to sing “Happy Birthday,” but couldn’t afford the rights to the song because we’re paying off our kids’ debts. Instead, let’s take another trip in the Wayback Machine to see how things have changed at Facebook.com over the years.

Before Mark Zuckerberg attended Harvard university in 2004, a ‘face book’ was a pamphlet that students got with fellow students’ names and faces printed on it. The idea was that a face book would help students get to know each other. Now, of course, Facebook is how we all avoid face-to-face contact with other humans.

Tag yourself, I’m the light-blue dot up towards the top.

But you might not know what the actual login screen looks like today. The social network is such an integral part of our lives we’re automatically logged in on all of our devices, all the time. What’s the alternative? Logging in and out?

So just to remind you, here’s what Facebook.com looks like today:

And here’s how it looked when it officially launched on February 4, 2004, a time when most of us were chatting on AIM about which Ludacris songs we wanted to download on Napster to show off on our Myspace pages (Hi Tom!):

Whoops, that’s not Facebook! However it is Facebook.com circa early 2004. This is because your grandparents are actually correct when they tell you they are “going to get on The Facebook.” When Zuckerberg launched Facebook, its website was located at http://www.thefacebook.com. Here’s what it looked like:

I think we all owe old people an apology.

As you look at the original design, “A Mark Zuckerberg Production” at the bottom isn’t even the most hilarious thing about it – though that’s pretty funny. The “About” section is:

Say what you will about Zuckerberg, he was honest from the beginning.

When Justin Timberlake – err, we mean Sean Parker, the founder of Napster, got involved in Facebook he urged Zuckerberg to drop the “The” from the company’s name. Zuckerberg never wanted it in the first place, reportedly, but since “Facebook.com” was taken he went with it instead.

But Parker’s urging and Facebook’s instant success emboldened Zuck, and he managed to obtain Facebook.com in 2005. At first, the site’s appearance remained unchanged. But later in the year, the company would drop the “The” from its name, calling itself just “Facebook” for the first time:

By the end of the year it would stop using “the” in front of “Facebook” all together:

In 2004 Facebook was a social networking site for colleges but by 2005, as you can see above, there were “two Facebooks: one for college and one for people in high school” (emphasis Facebook’s).

The social network made its first major overhaul in 2007. It was then Facebook finally pivoted away from being an exclusive online social club for students, and officially became a social network for everyone. It was calling itself a “social utility” in those days:

Mark Zuckerberg became a billionaire in 2008. Presumably his ego was sated by this, and thus the company decided to remove the “a Mark Zuckerberg production” statement from the bottom of the website:

2009 brought further simplification. Instead of words, the company just used pictures and forms:

In 2029 we predict Facebook will just be cave paintings. And in 2030 it’ll bring the “poke” feature back to replace those. We’ll all be on TikTok then anyway.

The site remained largely unchanged through 2013:

That marked the site’s last major change. In the time since 2013, we’ve only seen minor tweaks to the main page – no face-lifts to speak of: 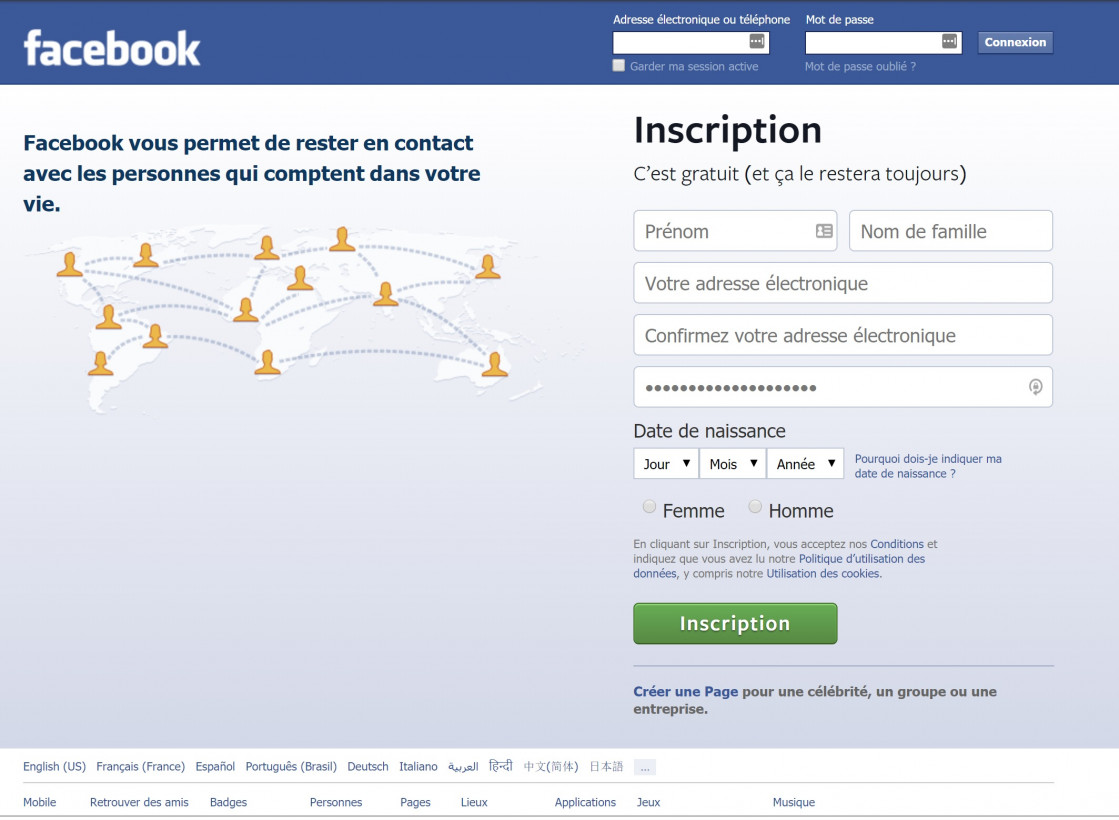 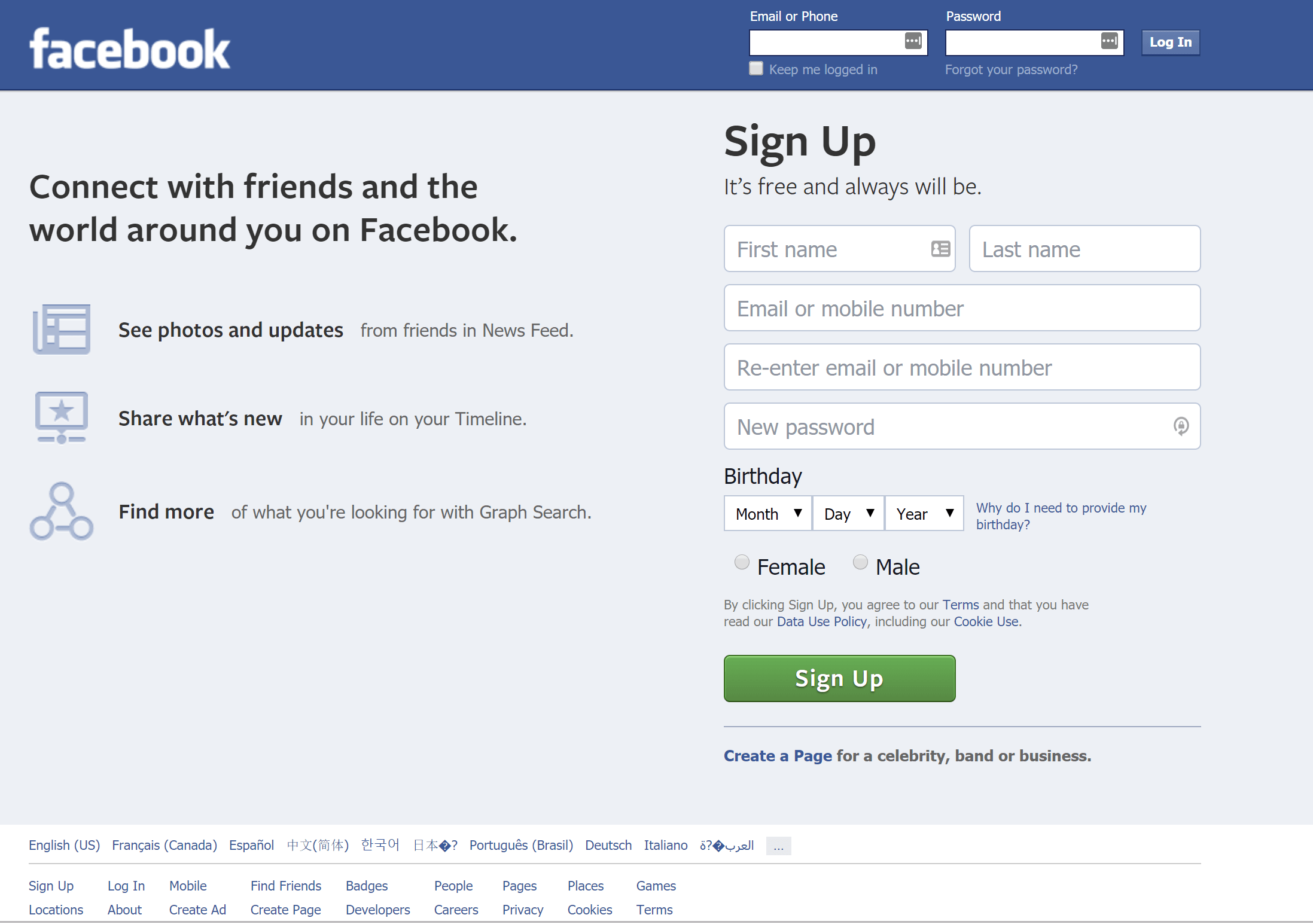 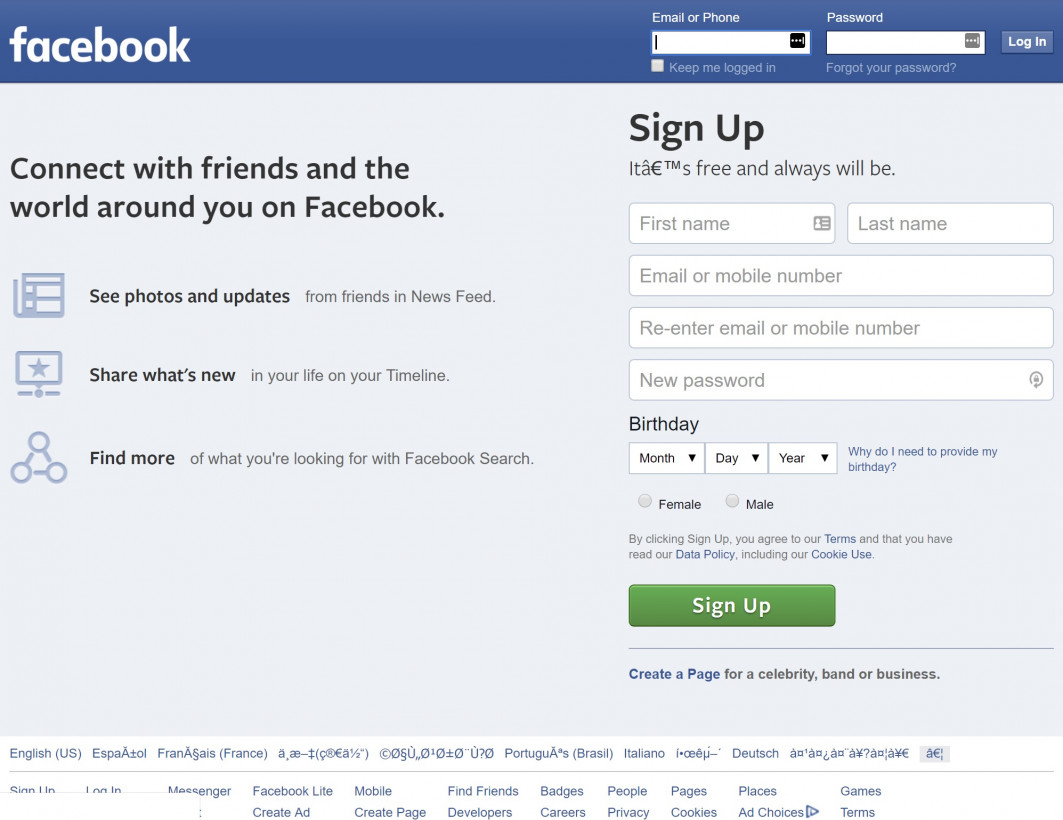 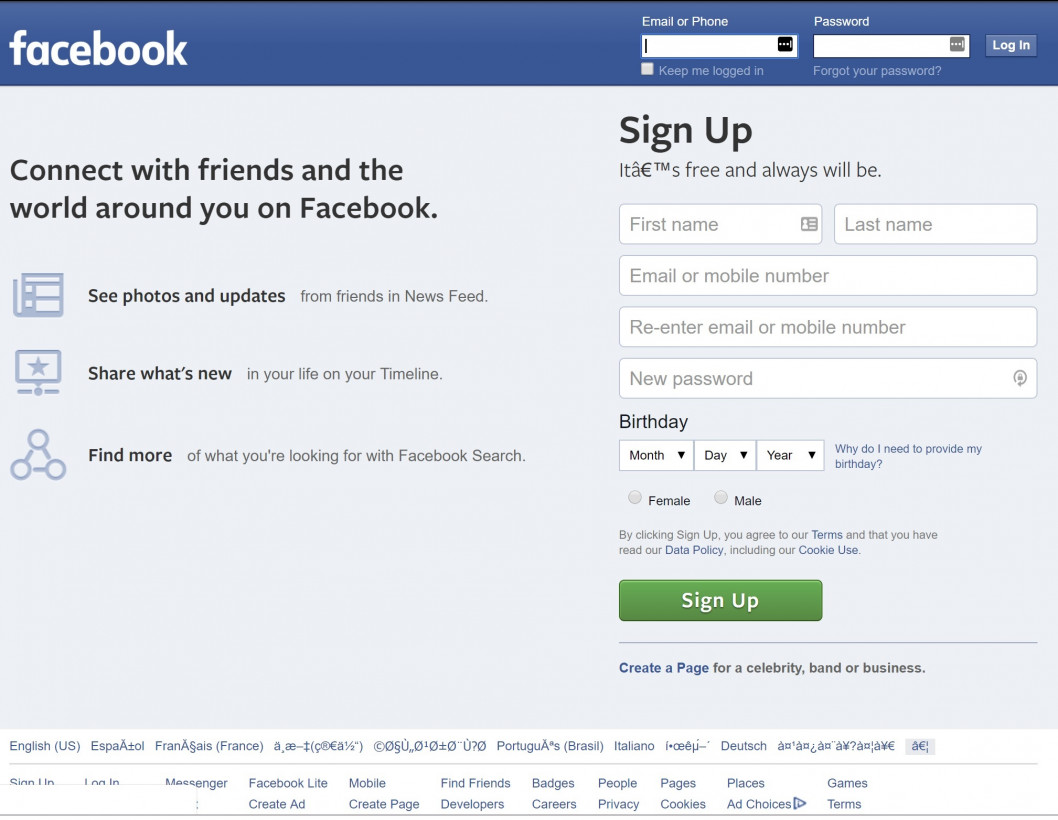 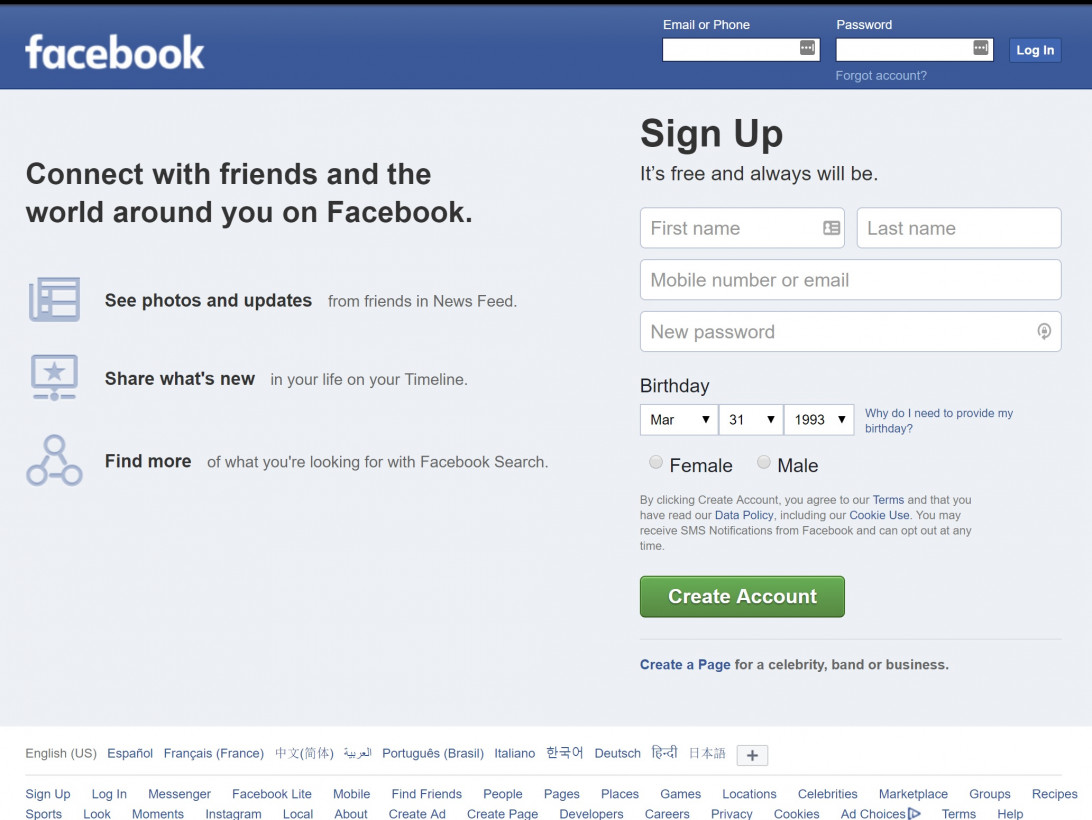 But, with billions of registered users, it’s hard to make a case for change. Love it or hate it, Facebook’s arguably the most popular “thing” in the history of humanity. At least until the next big thing comes along to replace it (bye Tom!).

For now, here’s our sentiments on your 15th year in existence Facebook: