I like Facebook and I’m not deleting my account any time soon. But I do feel like I have an unhealthy relationship with the social network. It kinda feels like that one friend who’s slightly too nagging. You know, the one that’s always demanding attention. Sure, we have a good time and a couple of laughs, but they’re an attention whore with zero respect for personal space.

I’ve found myself endlessly scrolling past video posts, feeling a bit used and dirty after watching yet another Trump compilation video.

At our Christmas dinner my father-in-law offered me a subscription to a newspaper. My girlfriend laughed and quickly dismissed the idea – we read books and news on our iPhones and iPads. No need for paper here, thank you very much.

But just two days later the subject came up again when I found myself once again scrolling past a bunch of supposedly inspiring posts (in the middle of the night, mind you) on my iPad. This woke up my girlfriend, who then reached for her iPad and immediately checked Facebook.

That’s when we looked at each other and concluded: We are pathetic.

So we made a deal: We’d try a newspaper for a month instead of using Facebook. Like at all. A Facebook hiatus of sorts. Except for once a week. And only then on a laptop and for a maximum of 10 minutes, just to see what we missed. 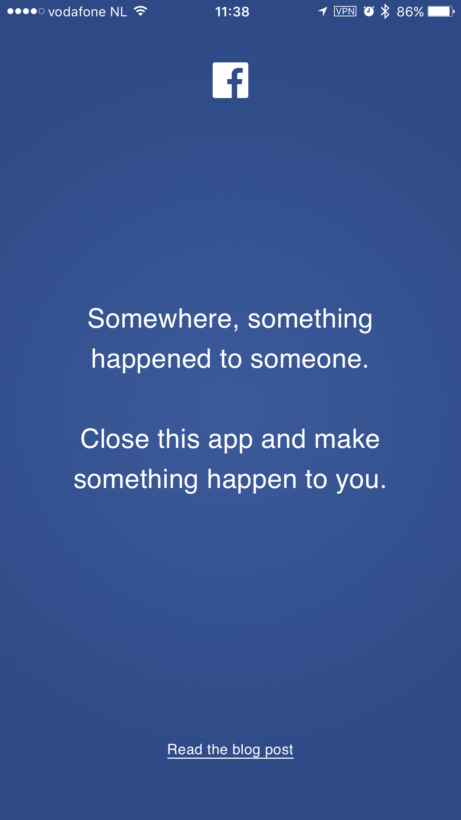 I quickly realized I’d have to delete the Facebook app from both my iPhone and iPad. And that made me a bit anxious.

Deleting it seemed a tad excessive, but I also knew I wouldn’t be able to resist clicking the icon if it remained there.

What I came up with was simple: I had our brilliant designer build a web-app. One that looks exactly like the Facebook app. And it’s available to you.

Add it to your homescreen (both iOS and Android) and when you open it, it’ll remind you not to waste precious time looking at what other people are doing.

Make no mistake – I don’t dislike Facebook. I just feel I need to create some distance in our relationship. I hope this little gimmick helps me do just that. 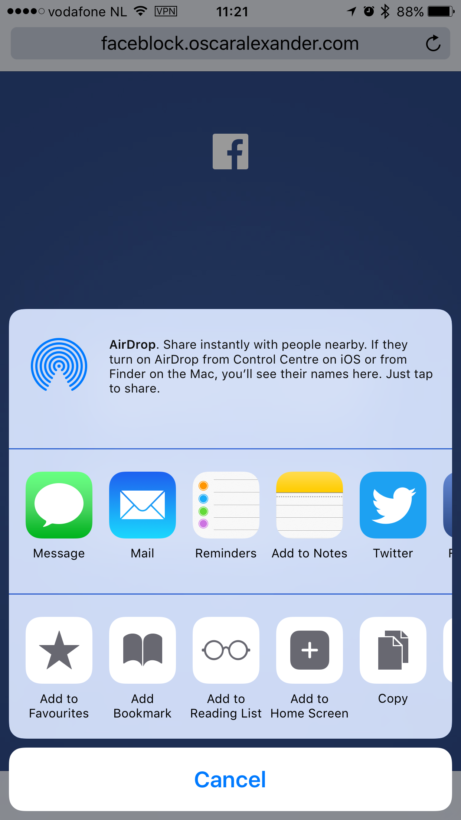 In a few short steps, you can regain some of your independence from social media.

Simply open this URL on your iPhone or Android device: thenextweb.com/playground/faceblock

Then just remove the original Facebook app and replace it with your new Faceblock webapp. That’s it.

Now relish in the thought of extra time and go do something productive.