Reports this week suggest that Facebook is preparing to launch an e-money service. The Financial Times believes that the US company is weeks away from gaining regulatory approval in Ireland for a service that would let users store money on Facebook and use it to pay others.

Forbes reports that Facebook has already obtained Money Services Business (MSB) licenses in 48 U.S. states, so it is planning something global, but the publication highlights a valid question: do users trust Facebook to handle their money?

That doubt may persist in the US and Europe, but over in Asia — where people are largely more trusting of the company and technology in general — an e-money service could be a huge hit.

Internet users in this part of the world — China excluded — are still keen on Facebook, unlike the US and elsewhere where there’s been a backlash, with young users in particular leading the way.

Yes, it is true that chat apps have become hugely popular for daily messaging in some countries, but hundreds of millions of people continue to use Facebook daily. The difference likely lies in chat apps being private, but Facebook is your public persona, and — with over 1.2 billion active users — no service has distribution like it.

The second important factor is that banking and bank services are not as widely adopted in many parts of Asia. India, where Facebook has 100 million active users, has an estimated 700 million ‘unbanked’ people, while credit card adoption rates are low across the region.

The table below, from Tech In Asia, shows credit card and bank account penetration across six countries in Southeast Asia — Indonesia, Malaysia, the Philippines, Singapore, Thailand and Vietnam.

Given the enthusiastic way that many Asians adopt mobile technology and the lower level of concern around privacy, there’s clearly an opportunity for something or someone to come in and change the status quo. Given its massive distribution, why not Facebook?

The company has arguably tried this before, of course. Facebook Credits fizzled out last year — despite my optimism for it — though things could be different if Facebook comes back around with an e-money service.

Dealing in money directly rather than its own ‘Credit’ system is likely to give any Facebook e-money service a better chance of success thanks to less intermediary processes and no uncertainty over valuations. Facebook also has many more users than two years ago — with Asia now its largest continent.

Mobile payment is certainly not a nascent market. There are plenty of tech firms that are either looking to bridge the banking gap or make payments easier for users.

The field of contenders includes big projects like Vodafone M-Pesa — which brings basic banking services to emerging markets — while there are plenty of ambitious startups, like Indonesia-based Coda, and even BlackBerry has piloted a scheme to send money using its BBM service in Indonesia. 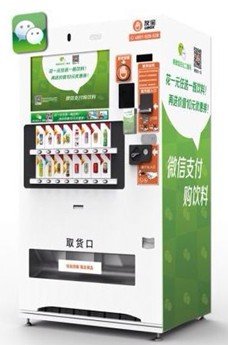 Perhaps the best example of a mobile money rollout can be found in China, where Tencent’s Weixin app can be used to purchase goods using a smartphone.

Weixin users get a discount buying items from participating vending machines like this one on the left, for example, as the app links up to Tencent’s Tenpay payment service.

With an estimated 500 million registered users in China, Weixin has the distribution to make such a scheme fly.

A recent example of its potential came during Chinese New Year, when Tencent tapped into tradition to let users send a red envelope of money (up to $16.50) via the chat app. More than 20 million envelopes were given out and, at peak, 585,000 people took part in gifting over a five minute period.

Obviously China is a market where Facebook’s services are blocked, not to mention that there are regulatory issues which complicate any global rollout, but Weixin may be an indicator of what Facebook is considering.