Last month I got a strange email in my inbox from 8tracks, one of the music sites I use most, asking if I’d be interested in investing in the company.

The note, which was attached to the top of my weekly playlist recommendation, said:

In an unusual turn, I’m not writing today to suggest playlists we’ve hand-picked for you (though I’ve slipped in a few that our community love at the end of this email). Instead, I’m writing about potentially investing in 8tracks.

New funding would allow us to build out a full music library for DJs, make it easier for listeners to find playlists they like, integrate 8tracks on new platforms, and refine our business model to continue to grow 8tracks for years to come.

This isn’t an offer to invest, and as of now you still can’t buy shares. I’d simply like to understand if you would be interested in participating. If there’s broad interest, we may file official paperwork with the Securities and Exchange Commission (SEC) to pursue this new crowdfunding option.

My curiosity piqued, I reached out to 8tracks to find out whether the company was in trouble, or if it was trying to do things a different way.

“There’s been a bit of a shakeout in digital music” said CEO David Porter, “there’s not really a way for a fledgling internet radio to exist, the table stakes are too high.” 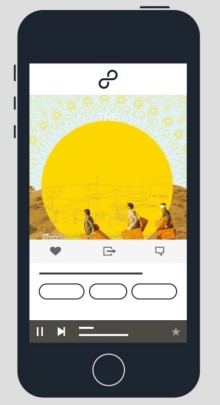 He says you’ve seen this over recent years with Songza’s acquisition, Rdio’s bankruptcy and other music startups like Turntable.fm struggling to keep afloat.

As the biggest players like Spotify and Apple have continued to gobble up market share, the space for others has shrunken significantly, according to Porter.

When it came time for 8tracks to raise its Series A Round it found some resistance from investors – even though they were happy with the company’s performance, they said they liked the numbers but the fund wanted to see a larger exit than what they anticipated we’d achieve.”

“That makes sense” Porter continued, but that put 8tracks in a bind: how would it raise the next round when investors only expect a huge exit?

The equity crowdfunding model provided an alternate path that didn’t include the huge venture capital firms and didn’t have a requirement for an enormous exit. “It provides an opportunity for the middle class startup – you’re not so reliant on the huge VC firms, or relying on a really inflated outcome.”

Porter says that by running a crowdfunding campaign its community can “own a part of the platform” which is a “good fit” with the company’s focus on community.

Equity crowdfunding has only recently become legal in the US when changes in the Jumpstart Our Business Startups Act (JOBS) allowed early-stage private companies to raise capital from the public.

When 8tracks launched an initial ‘testing the waters’ request earlier this year for interest to its community in the form of the email I received, it got a surprising $30 million in pledges from 30,000 people, despite only contacting a small portion of its 16 million contributors.

It doesn’t expect all of those to come through and stump up the cash since anyone can just write a number in the box, but is moving forward and plans to submit to the SEC for permission to raise in this way.

If approved, it plans to kick off an official equity crowdfunding campaign in June.

8tracks hopes to raise $10 million, but it’s realistic that it’s hard to predict how much will come through – it expects anywhere from $4 million upward based on the response so far.

If that round is successful, Porter said that “the company has to operate from the perspective that it won’t raise any further cash” rather than what a VC would expect, which is to spend the money quickly in pursuit of massive growth.

The plan is that “after the crowdfunding raise 8tracks will work toward profitability so we don’t need to raise any more cash, that’s the goal.”

8tracks has made sweeping changes to its platform recently, many of which have been hard choices for the company, but necessary for future growth and maintaining profitability – which is why it’s raising this money now.

In just the last twelve months it’s moved to secure direct licenses for music played on its service, discontinued its mobile apps outside the US and Canada for licensing reasons as well as dropping support for external services like SoundCloud and Sonos.

Those direct licenses are why the company needed to restrict its services’ availability in the short term, because securing the global license is incredibly expensive.

Once the crowdfunded equity campaign is complete, the company plans to build out both engineering and marketing further, as well as its sales team to monetize the product by selling advertising directly rather than via other networks.

It’s an interesting alternate path for a company that’s been around for a number of years, with impressive growth, but isn’t likely to make a huge exit.

As venture capital is reportedly becoming harder to come by, equity crowdfunding could be a lifeline for startups that need cash without the expectations of an oversized exit – and that want to tap into their community’s loyalty.

Of course, it’s potentially a more dangerous route offering so many investors a piece of the pie, but it also frees companies from the bounds and expectations of traditional cash.

8tracks plans to launch its equity round in June, but in the meantime you can sign up to be a part of it here.