Google has launched its first iOS app for its original social network, Orkut, the company announced on Orkut’s blog. Compatible with the iPhone, the iPad and the iPod Touch, the app comes almost six years after the network’s launch.

But could it be too late? As we reported yesterday, Facebook has recently overtaken Orkut in the only country where it remained a leader, Brazil. It’s not just Facebook: Google’s new social platform Google+ has also been gaining ground, attracting 4.3 million Brazilian users last month.

Yet, it may be too early to dismiss Orkut. Not only because it still has over 34 million users in Brazil – a growing number – but also because Google is giving no sign of giving up on the network, which is now managed by its Brazilian subsidiary. For instance, it hasn’t been actively pushing local users to migrate to Google+, and Orkut itself has gained a redesign, as well as new attractions and features. 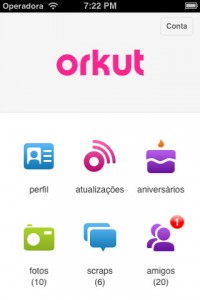 As a matter of fact, this belated iOS app is only one of Google’s recent initiatives around Orkut. Thanks to the iOS app, users will be able to update their status, contact their friends and get birthday reminders directly on their iPhone or iPad.

Still, the company will have to try harder if it wants users to access Orkut from their Apple devices. Despite the fact that its version number is “2.0,” the app it has just launched lacks one of the key elements of Orkut’s identity and popularity: Communities.

Of course, it wouldn’t be surprising for Google to add this functionality later on. Actually that’s exactly what it did for Orkut’s Android app; updated in December, it only gained access to Communities earlier this month. But is it really a good idea?

While this strategy could make sense for a small startup, it seems ill-advised for a company as big as Google to launch a limited product which is likely to generate criticism, at a time where a growing number of users are interested in joining other social networks.

➤  Orkut, via the App Store