If you’ve been struggling with Facebook lately for your brand page, don’t think you’re alone.

Between changes to the layout of brand pages, News Feed algorithm adjustments, and countless other tweaks and changes, marketers are constantly on their toes anticipating what’s coming next.

A current issue that many are facing is the decline of a post’s organic reach. Marketers have had their organic reach cut by more than half with their Page’s published posts.

This change is caused by a deeper underlying issue—the competition to get seen on a fan’s News Feed is higher than ever. At any given point a user logs into the Facebook platform, there are more than 1,500 posts that user could be shown.

In short, Facebook wants to bring the best quality content to users’ Feeds. Luckily, quality content is what all of us want to create! So rather than give up on the world’s largest and most popular social media platform, you can simply shift focus from what’s going on your brand pages to how to get your Facebook post seen on our fans’ News Feed.

TrackMaven analyzed 5,804 Facebook pages (each with a minimum of 1,000 Page Likes) spanning a total combined 1,578,006 posts to determine the attributes of the most impactful Facebook interactions.

These are the top five most effective strategies for landing on a user’s News Feed, according to our data.

A marketer has a never-ending queue of tasks, which makes it essential to know the most effective times to post to social media.

In order to land a spot on a user’s Facebook News Feed, try shifting your scheduling strategy from posting during the most popular times in the workweek to the most effective times.

For example, although most of the work marketers put in happens Monday-Friday, the magic actually happens during the weekend. Posts on Sundays receive 2.72 interactions and are 25 more effective than a post on Wednesday.

Studying time of day showed some similarly counterintuitive data. Posting during the weekday (particularly during lunch) is most popular (All the data to follow is based on Eastern Standard Time):

But posts published after hours (from 5 p.m.-1 a.m.) gain the highest average of interactions on average.

Facebook became the largest host of online photos in 2011, and it’s still a prime spot for visual content. 88% of the Facebook posts we studied are images, and they receive 37 percent more average interactions than those without photos. So stay visual!

Punctuation is often times considered an afterthought. However, punctuation can convey the kind of emotional value that helps brands connect at a more human level. For example, we found that using exclamation points in a post correlates with more engagement.

An exclamation mark isn’t commonly used on Facebook—71.17 percent posts studied did not use them. But the posts that do use them see 2.7 times more engagement on average.

How many do you need? Overall, we found a positive correlation between post effectiveness and number of exclamation points. (A post with 7 exclamation marks receives 7.84 interactions on average. Now that’s something to get excited about!)

On any social network that offers hashtags, it’s generally a good idea to use them. They’re a relatively new development on Facebook, which introduced hashtags in 2013 to correspond with trending topics and to guide users to news and content on specific topics.

Fewer than 1 in 6 posts we studied contained hashtags, but those that include at least one saw 60 percent greater engagement results than those without.

How many hashtags gets you the best results? We found that post effectiveness is positively correlated with increasing hashtag use. Although posts with 1 or 2 hashtags did better than those with 3 or 4, posts that used a number of hashtags beyond 4 saw extraordinary engagement, peaking at 5.41 interactions per post at 7 hashtags.

The 140 characters on Twitter limit the message a marketer can craft and optimize, but it’s much different for Facebook. With a “limit” of more than 60,000 characters, you could get carried away. But since the competition is high, as a marketer it’s important to optimize your messaging to the right amount of words.

But our data showed a positive correlation between word count and post effectiveness. More specifically, posts of 80-89 words got 2 times as much engagement, topping out at 6.19 average interactions per post.

Surprising, right? One possible theory behind the increased effectiveness of longer posts is that they benefit from the intrigue of Facebook’s “Continue Reading” link.

According to psychology and behavioral economics professor Dan Ariely, our brains have a tendency to shift our preferences towards things we invest energy into—a theory known as the IKEA effect. Users could be more likely to interact with these longer posts because they’ve invested more time in reading them, just like the way you love your IKEA furniture because you’re invested in it from building it yourself. 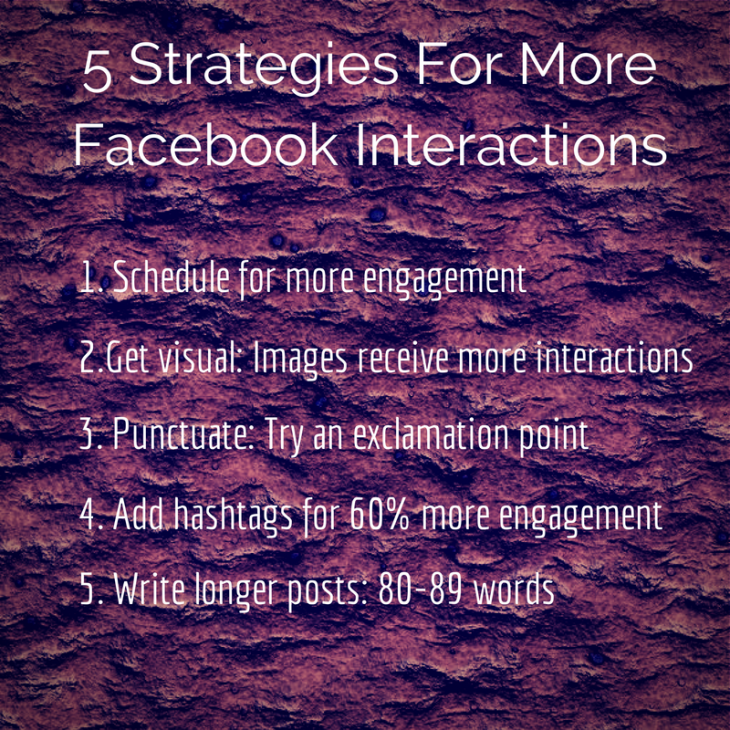 Landing on a Facebook user’s News Feed is every marketer’s priority now.

To increase your chances of getting there, first create the highest quality content for your audience. Then try experimenting with these strategies on your own posts and see what your own data tells you.

What strategies have worked best for you when it comes to increasing your Facebook organic reach? I’d love to hear about them in the comments.