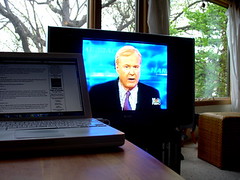 Could 2010 be the year that Social Media and Television finally get it together?

Fans of specific TV shows from different timezones around the world are saving the latest episodes of their favourite shows on their personal video recorders (PVRs) and then arranging common viewing times with their friends to watch the shows whilst discussing the action together on Skype, reports the New York Times.

Users are creating their own social TV experiences ahead of the broadcast networks who are testing real-time interactive systems, but are yet to make them publically available.

In 2009, Fox undertook a limited trial with Twitter during reruns of sci-fi series ‘Fringe’ in the US, running into criticism almost immediately from the show’s fans by swamping the screen with tweets from the cast and crew of the show, thus obscuring much of the action.

In the UK, high profile post-apocalypse drama, BBC’s ‘Survivors’, launched alongside an innovative stream of tweets from ‘survivors’ supposedly trying to get messages out to a world in which most of the population had been wiped out by a mystery virus.

Sadly, these tweets had petered out by Episode 2 as the production team seemed to lose faith in an idea which must have sounded great in the caffeine-fuelled brainstorm-session.  Twitter-using Survivors fans were left with nothing but the official #wearesurvivors hashtag to link their bemused conversations together.

With the second series of Survivors due to hit  UK TV screens on 12th January, fans of the show will be eager to see if the show’s producers will reintroduce any social media elements to the enhance viewers’ experience of the show.

Elsewhere on Twitter, real-time conversations about TV shows being broadcast live are routinely linked together through the use of hashtags.  However, watching TV with the laptop on your knee isn’t for everyone.  Not all of your followers might be interested in your views on the latest entrants in the Big Brother house or the latest soccer scores and they may decide to unfollow you.  Other followers might be interested, but see your tweets on the subject as ‘spoilers’ because they’ve recorded the show to watch later.

For now, social TV seems to be a predominantly web-based experience, as the popularity of services such as tvloop.com demonstrates.  Also, the NYT article highlights a ‘can’t wait culture‘ of TV viewers using cheap adaptors to connect their cable and satellite feeds to their PCs to grab live TV broadcasts in order to stream them on sites such as justin.tv.  In this way, viewers on the East Coast of the USA are able to stream shows for the benefit of friends on the West Coast several hours ahead of their offical broadcast slot, chatting to them online at the same time.

Social Media and TV fanatics are ahead of the game right now and bending the rules to their will.  It remains to be seen whether the broadcasters, perhaps spurred on by advertisers eyeing a potentially motivated and engaged audience, will be able to serve up an enticing interactive broadcast experience during the forthcoming year.

Finally, it wouldn’t be post on a tech blog without mention of the Apple tablet.  Commentators have convinced themselves that ‘ a large iPhone’ or ‘a better Kindle’ won’t be enough for Apple to blow the market’s mind.  Maybe Social TV programming of some sort will find it’s way into the suite of offerings on the ‘yet to be confirmed’ iSlate platform?

Could web apps currently geared for the iPhone such as TVCatchup find a happy home on a tablet product which might enable them to run alongside Skype or any of a wide range of social media tools?