Wahooly, a site that lets you earn equity in startups by sharing your influence through social media, just announced a partnership with CMP.LY (pronounced ‘comply’), a tool that helps bloggers and other digital influencers disclose conflicts of interest. More than 200 startups are already onboard to offer up equity over the course of a year, and anyone can sign up ahead of the official launch here, or get in early through Klout if your score is over 35.

Here’s some background on how it works: Wahooly partners with startups that want to offer up a percentage of their companies in exchange for traction. The percentage is then split between Wahooly’s users (so far over 23K) based on how active each one is. Wahooly measures and rewards participating users based on the quality of user feedback, activity and the strength of influence. The size of each user’s share fluctuates with their activity and the overall activity of others.

But like most things in life, there’s a whole mess of problems that need to be solved for this idea to work. The legal issues have been ironed out after talks with the SEC and FTC, but one glaring issue — that of disclosure — had yet to be solved until now. If you’re buying into a startup by sharing it with the world, there needs to be a way to disclose this information to your followers. It’s certainly an ethical dilemma, and it’s a problem Wahooly’s users have been vocal about. Nobody wants to repeat Ashton Kutcher’s mistakes.

This is where CMP.LY comes into the picture. CMP.LY developed a URL shortener that automatically adds custom disclosure statements over external content. Wahooly is now fully integrating its platform with CMP.LY, so disclosures are automatically built in.

Wahooly’s expecting a full launch in 2012, with an ongoing partnership with CMP.LY. Time will tell if these efforts at transparency are enough for the long run, but Wahooly continues to look promising as an entirely new way to get involved in startups through social media. 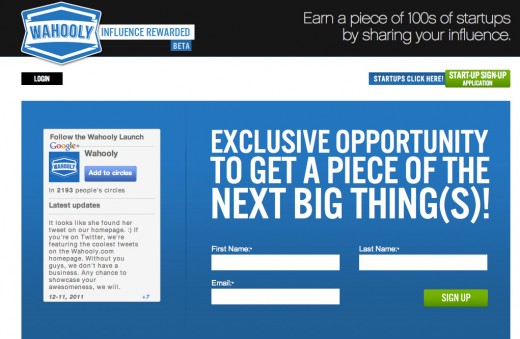