Today Google announced that  12 more countries have access to Google Play’s five million books. So if your a Honduran fan of e-books and Android, you should start planning some quiet time for reading. 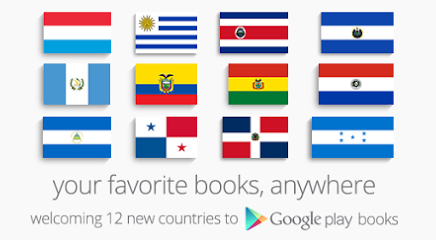 Google posted an image of the flags of the countries with access to Google Play books. But if you’re not up on your geopolitics or vexillology (study of flags), here’s a list of which countries will be enjoying Game of Thrones via Google Play: Paraguay, , Bolivia, Costa Rica, Nicaragua, El Salvador, Netherlands, Ecuador, Uruguay, Panama, Honduras, Colombia and Dominican Republic.

Update: Google has told TNW that it mistakenly pushed the Google+ post about the addition of the 13 countries too soon. But it insists, “The launches are coming but not ready today.”

Update 2 (June 19): The services are now live in these countries, although there are 12 not 13 as Google originally announced.