Ah, Berlin. The city that wears its history on its sleeve, yet allows ample space for new culture to thrive. Its creative scenes, tech companies and weekend-long dance parties have made headlines in recent articles in Vice, Fast Company and The New Yorker. All eyes seem to be on Berlin.

But don’t let its Brooklyn vibe or the Freikörperkultur (FKK) get you too relaxed. This is a city where few survive without a few bottles a day of the highly caffeinated tea drink, Club Mate.

We arrived just in time to spend a Sunday at the elusive club Berghain, before pouring out into the streets a sweaty mess to watch the World Cup final match. A win for Germany felt like a win for every person that night on the streets of Berlin.

After shaking off our champagne hangover, I, along with my audience.io team, prepared for the other event of the (startup) season: Tech Open Air Berlin.

Tech Open Air, now in its third year, is Europe’s coolest tech conference. Founded by Niko Woischnik, the two-day event brings together thousands of curious minds in an “Open Air” culture that is uniquely Berlin.

And unlike conferences such as The Dublin Web Summit, where high-priced speakers are closed off in an upstairs VIP room, Tech Open Air’s speakers mingle among the crowd, name-tagless and eating the same sausage links and gluten-free arepas as everyone else.

It was at Tech Open Air, and in the days and nights surrounding the big event, where we met dozens of Berlin startups. There were a handful of magical startups flying just under the radar with the promise of getting their names on the global startup map alongside local giants like SoundCloud, EyeEm, Get Your Guide, Wooga, Wunderlist, and DeliveryHero.

Without further adieu, here are more than a few startups to check out and clog up your already overloaded iPhone’s storage capacity:

Forget the harsh iPhone alarm. Let Capsule.fm wake you up with its “Early Edition” app in a soft, soothing voice.

If you’ve seen the movie Her, then you’re already familiar with what the team behind Capsule.fm is trying to accomplish. Just before bed, set an alarm and activate the beautifully designed Capsule.fm’s night mode. Then wake up to ambient music and your own personalized stream of news, weather, and trivia in a futuristic AI voice that’ll have you feeling like you’re living in the Spike Jonze film in no time.

Discovery, play, education, and gaming – it’s all spinning round in the Berlin-based company ToyWheel, who’s reimagining and re-inventing toys for the digital age. When he was three years old, ToyWheel’s CEO and co-founder Evgeni Kouris was learning physics from his Russian grandmother. And while you and I were watching MTV, he was mastering the classical piano.

Now, with all the energy of a toymaking Willy Wonka, Kouris is leading a team of eight to produce mobile apps and games designed for young children that fuse the digital world with the physical. ToyWheel not only engages kids, but educates them to create their own “playground.” The team’s vision is to equip kids with “roots and wings in the 21st century.” 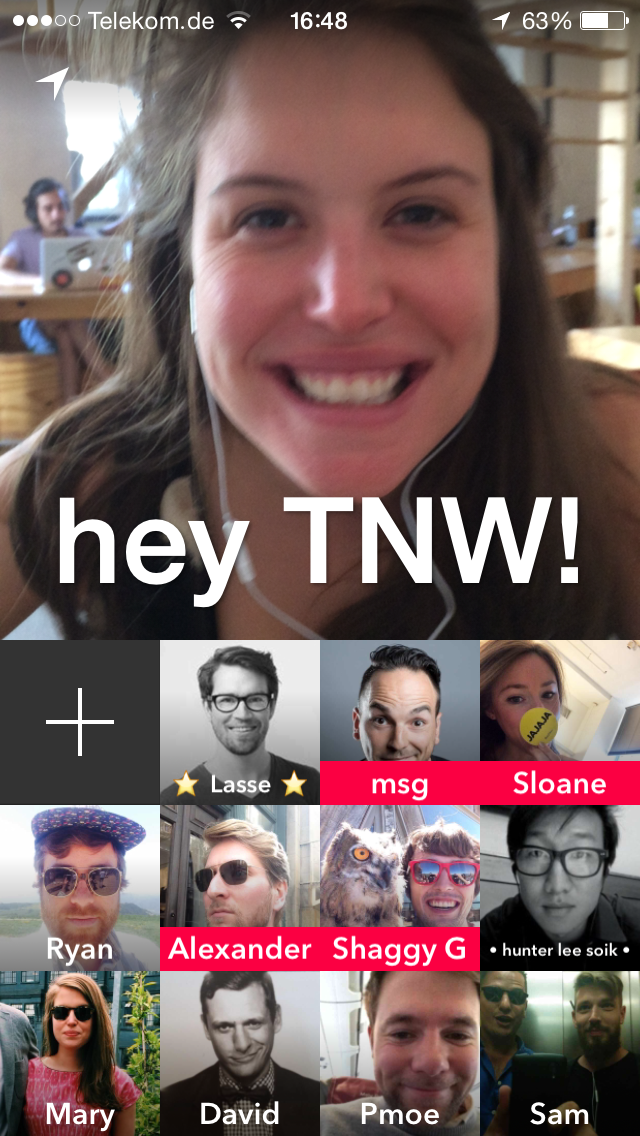 Snapchat who? Hands down, the conference favorite this year was TapTalk, which had every visiting London and New York techie giggling with excitement.

In the same way that Snapchat lets you share temporary photos, videos and messages with your friends, TapTalk does so in a more intuitive, better-designed, and (dare I say) more adult-friendly way.

Its most intelligent design element is the fact that your friends’ faces stay marked red until they’ve been responded to, prompting a never ending picture message volley.

While it may just be a flash in the pan for picture messaging apps, for at least this week, TapTalk is our favorite visual way to just say, “Hey!” (And yes, it’s even Ashton Kutcher approved.)

Imagine being able to draw any object you can imagine in the air and then have it 3D printed for you. That’s exactly what the Berlin-based AirMarkr is aiming to do. The app lets you sketch out your ideas in 3D real-space, in the air or anywhere, snap it in a photo then 3D print it.

Why should drawing be restricted to the limited dimensions of 2D? Co-founder Miho Tanaka says that in the long term, through the drawings, they’ll collect big data on human gestural movements to further develop intuitive interfaces using motion tracking.

What do Ryan Gosling, Sarah Jessica Parker and supermodel Cara Delevingne all have in common? They all love a bit of handiwork! Forget coding – knitting, sewing and crafting are what’s cool.

Berlin-based Master Class startup have created an online learning platform for all the do-it-yourself fans out there. The company offers online video courses “Master Kits,” which include all required materials for a course in a box and are sent by post.

Founded by a former investment banker and consultant, Master Class was an answer to a uniquely first world problem. The two founders Linda Dannenberg and Verena von Stromberg were tired of sitting in front of a computer all day long, and thought, why not just do what we love and help others do the same?

What language do you want to learn? Are you a beginner or advanced? And what’s your age? That’s all Babbel has to know to get you started on the path to becoming a polyglot.

While it’s frustrating to imagine, oftentimes the only thing standing in the way of a major scientific breakthrough can be something as petty as a political roadblock, a competition for grant money or an ego battle over fame.

By knocking down the proverbial walls, doctors Ijad Madisch and Sören Hofmayer, and computer specialist Horst Fickenscher, are applying open source and social network ideologies to connect scientists, data and research around the world. Since launching in 2008, their platform, ResearchGate, has received over $35 million in funding from the likes of Bill Gates and Peter Thiel and now counts over 4 million members.

ResearchGate is defining the vanguard and helping researchers around the world to accelerate scientific progress.

Unsurprisingly, the Berlin-based and USV-backed startup Onefootball had a good run in the lead up to the World Cup this year. The mobile app covers over 100 international football leagues and competitions, delivering its 14 million users with live scores, commentaries, breaking news, videos, tables, statistics and more.

Calling all ladies and sensitive boyfriends in the room: Clue is an app made for you to track your female fertility cycle. If you’ve ever read The Woman Code, you realize how shockingly little we’ve been taught about our bodies from our high school “Sex Education” classes.

With its mobile convenience and quantified-self cues, Clue wants to “clue you in” to what’s going on with your body. The platform lets you enter data about your period, pain, mood, fluid and sexual activity and make comparisons on a monthly basis.

What if brain training could come to you as naturally as breathing, walking and talking? That’s what the team behind UnlockYourBrain is trying to help you achieve with its “learning through your lock screen” product.

UnlockYourBrain turns your mobile phone’s screen into a training center by asking you quick brain-boosting exercises in order to use your phone. Maybe not one to try after a weekend at Berghain.

As the winner of Tech Open Air’s hardware pitch competition, LUUV is perfectly poised for stable growth among videographers. All puns aside, LUUV is a unique camera stabilizer that enables you to tape all your adventures on a smartphone or actioncam shake-free. After a successfully funded Indiegogo campaign, LUUV will be making videos more awesome the world over soon.

Has all this startup talk made you thirsty? While not a tech startup, make sure to grab a ChariTea, an awesome beverage brand found in all of the trendy places in Berlin (including our new favorite coworking space Betahaus!). In true disruptive startup fashion, their sparkling mate tea is giving industry incumbent Club Mate a run for its money.

As the sun sets in Berlin just behind the Fernsehturm, the TV tower also lovingly known as “Alex,” the tireless tech town begins packing its bags and heading out; some home, some to the Soho House for a workout, and others out to bars, restaurants and clubs.

Berlin is such a calm city with a raging undercurrent of energy. It’s a town of serendipity, sandy bars along the Spree, spritzers, house music and schnitzel. Far beneath Alex the TV tower, there’s even a spaceship, a hacker’s den, which some believe is as big as the city itself. The food, the friends, the energy of the ecosystem, are enough to make one never want to leave this town, but at the very least will have us coming back for more.

*Fueled, a mobile development company based in New York and London, is a member of the author’s company audience.io.